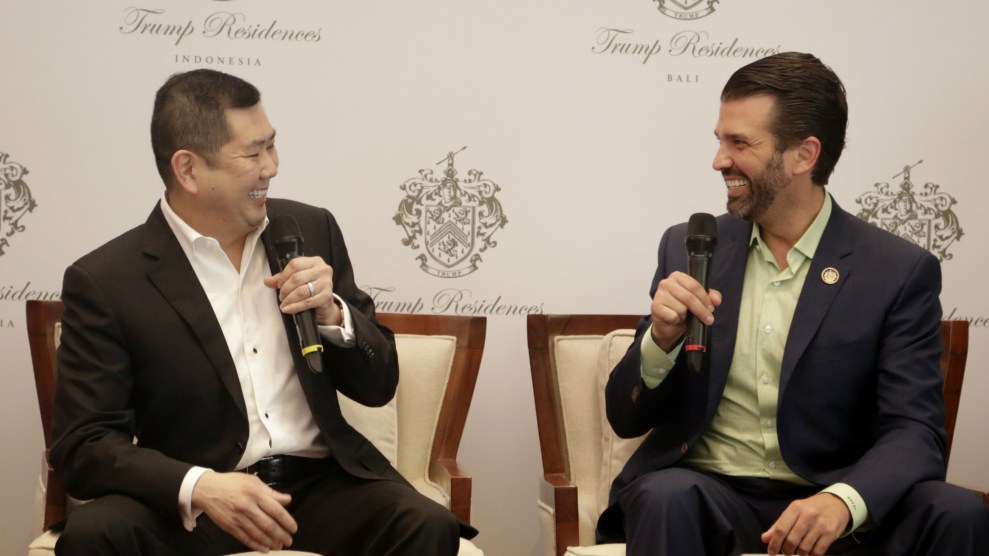 Donald Trump Jr. flew to Indonesia this week to help cut the ribbon on two new Trump-branded resorts. When he was there, he told reporters that the idea that the president’s business interests in the country would affect American policy was “totally asinine.” But even as Trump Jr. dismissed the potential for a conflict of interest, his father’s business partner, Indonesian billionaire and political impresario Hary Tanoesoedibjo, explicitly promoted the event as a visit from the US president’s son.

“Today, I received the arrival of the eldest son of United States President Donald Trump, Donald Trump Jr. at the MNC Center, Jakarta,” Tanoesoedibjo wrote on Instagram under a video of the two men and their families socializing.

When Trump took office, he refused to divest from his business interests and continues to own the Trump Organization companies that have partnered with Tanoesoedibjo. Trump has said that his adult sons, Don Jr. and Eric Trump, now manage the day-to-day operations of his business empire.

Tanoesoedibjo, a billionaire developer and media mogul in Indonesia, tried to develop his own political career, but his 2014 presidential bid failed to get off the ground. In 2015, Trump partnered with Tanoesoedibjo to put his name on resorts in Bali and Lido, which would be developed and owned by Tanoesoedibjo. That same year, Tanoesoedibjo founded his own political party, the Indonesian Unity Party, saying he was inspired by his relationship with the real estate mogul. Tanoesoedibjo has already paid Trump between $2 million and $10 million in royalties for using his name, and $591,000 in hotel management fees. This spring, Trump sold one of his Los Angeles mansions to Tanoesoedibjo for $13.5 million.

In Jakarta, Trump Jr. attended a “pre-kickoff” event to woo investors who might be interested in buying a luxury condo or mansion at one of the two Indonesian resorts. While Tanoesoedibjo will earn the bulk of profits, the Trump Organization will earn commissions and fees off the sale of Trump-branded property at the resorts. At the Jakarta event, Trump Jr. told reporters that his father’s personal financial interest in Indonesia and with Tanoesoedibjo would have no impact on US policy.

“I’d like to shut that nonsense down once and for all right here,” Trump Jr. said.

Yet, Tanoesoedibjo has never been shy about invoking his relationship with the president—not just the Trump Organization as a hotel brand—to promote his own interests and those of the projects. In early 2017, he traveled to the United States, attending Trump’s inauguration, where he and his wife bragged on social media about their VIP treatment, even posting video shot from a vehicle traveling down the barricaded motorcade route ahead of Trump’s own procession from the Capitol to the White House.

In an interview with an Indonesian magazine later in 2017—the article was titled “I Have Access to President Trump“— Tanoesoedibjo said he had regular contact with Trump’s sons but also had access to the president himself. He took credit for connecting Trump to two Indonesian politicians Trump used for a campaign stunt in 2016.

“I’m just a small fry, but if other people have difficulty getting to him, I can do it easily,” Tanoesoedibjo said in the interview. “I communicate with his children over our businesses. I can meet with his kids anytime. I just need to pick up the phone. My WhatsApp messages are also responded.”

Tanoesodibjo later denied having made the claim, but the Indonesian magazine staff who conducted the interview said they had tapes and a transcript to back up the quotes.

Even if the Indonesian business leader is not running for office, he still tries to stay involved in political life. Last week, Tanoesodibjo’s daughter was nominated by his political party to potentially fill an Indonesian Cabinet position.