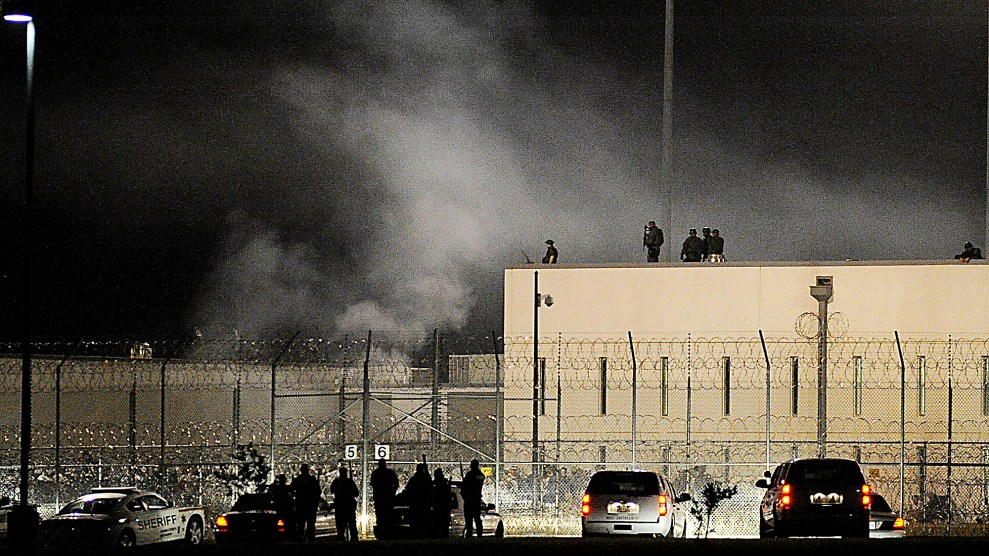 Officers stand on the roof of and outside the Adams County Correctional Facility during a 2012 riot. ICE recently started sending asylum seekers to the prison.Lauren Wood/AP

In a now familiar pattern, Immigration and Customs Enforcement has started sending immigrants to another for-profit jail in the Deep South. Mother Jones has learned that the latest addition to ICE’s rapidly expanding southern detention network is the LaSalle Correctional Center in Olla, Louisiana, a jail run by the private prison company LaSalle Corrections.

In February, Congress directed ICE to reduce its detention population, but ICE has ignored that request. After President Donald Trump forced a government shutdown in December, legislators averted another shutdown in February with a bipartisan bill that directed ICE to go from detaining nearly 49,000 people to 40,520 by October. Instead, ICE has pushed its detention population to all-time highs. The agency was detaining a record-high 55,220 people as of Saturday and has been rapidly contracting with new private prisons to house that increased number of detainees.

ICE spokesperson Bryan Cox confirmed that the agency started using the Olla jail this month. He said there are about 100 immigrants there so far. The facility can hold up to 755 people, according to LaSalle’s website.

The LaSalle Correctional Center is one of eight detention centers that ICE has started using in Louisiana and Mississippi since February, the month Congress directed the agency to detain fewer people. All of the new immigration jails are run by private prison companies. Six are run by LaSalle Corrections. The new jails have primarily been used to hold adults seeking asylum after being stopped at the southern border. As I wrote last month:

After I reported last month that ICE had quietly opened three new detention centers in the south, Democratic legislators and presidential candidates harshly criticized the move. Sen. Elizabeth Warren (D-Mass.) sent a letter to ICE demanding answers about the new detention facilities. Warren wrote that “it appears that ICE has decided to place immigrant detainees at these facilities without providing proper notice, despite the fact that they suffer from a myriad of health and safety problems.” Warren asked ICE to respond to a detailed list of questions by July 25, but the agency still hasn’t gotten back to her, according to Warren’s press office.

At the start of the Trump administration, ICE was detaining, on an average day, about 1,900 people in Louisiana and none in Mississippi. The agency started using one new detention facility in each state in 2018, but that pace has quickly accelerated with the eight new centers opening this year. The 10 facilities that ICE has begun using under Trump’s administration—eight in Louisiana and two in Mississippi—have a combined capacity of more than 10,000 people. NBC News reported that more than people 6,500 were being detained in Louisiana by ICE last month, second only to Texas.

Getting out of Louisiana jails can be nearly impossible for asylum seekers. As I reported in June:

ICE’s New Orleans office, which covers five states including Louisiana and Mississippi, is the least likely of any regional office to release asylum-seekers from detention while their cases are pending.  In 2018, it released 1.5 percent of migrants seeking parole—down from 75.9 percent in 2016. The Southern Poverty Law Center and American Civil Liberties Union of Louisiana are suing ICE to force the New Orleans office to follow the agency’s own parole policy, which requires people to be released if they don’t pose a threat to public safety or a flight risk.

Two of the new prisons—the Winn Correctional Center in Louisiana and the Adams County Correctional Center in Mississippi—were the subjects of damning investigations by the Nation and Mother Jones that helped spur Barack Obama’s Justice Department to move toward ending its use of private prisons. The Justice Department’s Office of the Inspector General concluded in a 2016 report about CoreCivic’s Adams County prison:

Four years after the riot, we were deeply concerned to find that the facility was plagued by the same significant deficiencies in correctional and health services and Spanish-speaking staffing. In 19 of the 38 months following the riot, we found CoreCivic staffed correctional services at an even lower level than at the time of the riot in terms of actual post coverage. Yet CoreCivic’s monthly reports to the BOP, which were based on simple headcounts, showed that correctional staffing levels had improved in 36 of those 38 months.

The Justice Department’s Federal Bureau of Prisons announced this May that it would not renew its contract with Adams County. ICE quickly decided to fill that void.

On August 2, detainees at the jail in Bossier Parish, Louisiana, that ICE started using in 2018 said they were beaten and pepper-sprayed after protesting their indefinite detention. “There’s even an ambulance here,” read a text message obtained by Mother Jones reporter Fernanda Echavarri. “Help us please this is ugly!” A local official confirmed at the time that pepper spray was used to “deescalate” a “small disturbance,” but denied that additional force was used. That weekend more than 100 immigrants were pepper-sprayed at a GEO Group detention center in Pine Prairie, Louisiana, after demonstrating in the yard. Cox told BuzzFeed News that “a brief, calculated use of pepper spray” was used to disperse detainees who refused to go inside.

Back in February, a summary of the spending bill from the Senate Appropriations Committee stated that the agreement “rejects the President’s request to increase the number of detention beds to 52,000.” But the bill didn’t stop ICE from using funds transferred from other parts of the Department of Homeland Security to detain more people. Republicans said that flexibility would allow ICE to detain up to 58,000 people.

Immigrant advocates agreed that the bill wasn’t as strong as Democratic leaders were making it out to be. Mary Small, then the policy director at Detention Watch Network, said in February, “I can’t tell you anything about this deal that is better than the status quo.” In 2018, Congress had also directed ICE to detain 40,520 people only to have ICE blow past that limit. “ICE tried to change facts on the ground so Congress would bail them out and now Congress is bailing them out,” Small said. If past years are any indication, ICE will soon be asking for another bailout to pay for its new jails in the South.