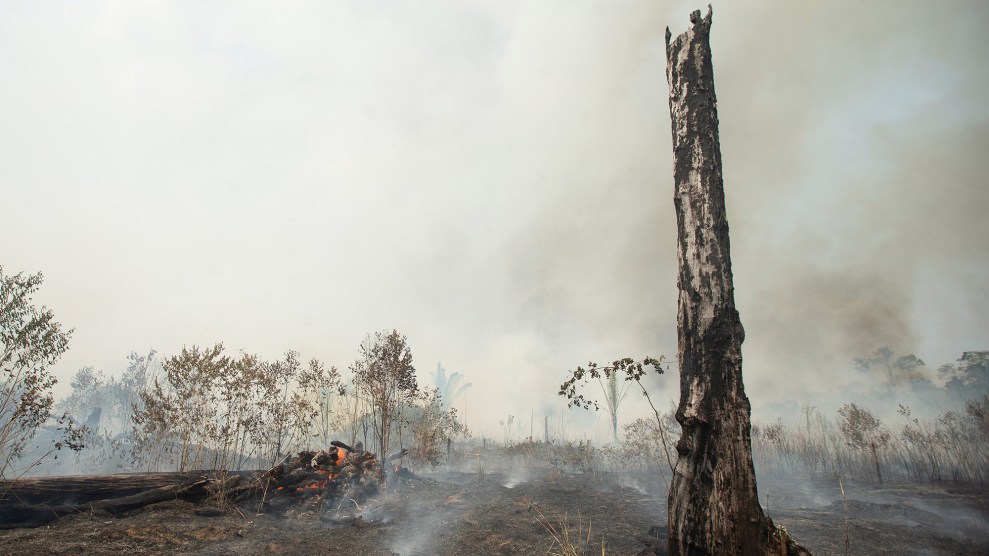 View of one of the fires in the Amazon of Rondonia, Brazil, on August, 24 2019. Joedson Alves/Zuma

Last week, Brazilian president Jair Bolsonaro’s seeming indifference about wildfires in the Amazon rainforest prompted international outrage, and rightly so. But, as I previously reported, many of the photos that celebrities and politicians shared on social media to raise awareness of the fires were misleading: Some were of fires in the Amazon but were several years old, while others depicted fires in completely different locations.

Leonardo DiCaprio, for instance, has been one of the most high-profile individuals responding to the fires—pledging $5 million to aid rainforest preservation. He shared the photo below with his 34.4 million Instagram followers last week, and many other celebrities, like Jason Momoa, reposted it. But there’s a problem: The image has been on photographer Mohsin Kazmi’s online portfolio since at least December 2017, according to the Wayback Machine, and its metadata indicates it was taken in December 2015. (It’s worth pointing out that the caption for one of DiCaprio’s photosets acknowledges that the photos are from 2017.)

#Regram #RG @rainforestalliance: The lungs of the Earth are in flames. 🔥 The Brazilian Amazon—home to 1 million Indigenous people and 3 million species—has been burning for more than two weeks straight. There have been 74,000 fires in the Brazilian Amazon since the beginning of this year—a staggering 84% increase over the same period last year (National Institute for Space Research, Brazil). Scientists and conservationists attribute the accelerating deforestation to President Jair Bolsonaro, who issued an open invitation to loggers and farmers to clear the land after taking office in January.⁣ ⁣ The largest rainforest in the world is a critical piece of the global climate solution. Without the Amazon, we cannot keep the Earth’s warming in check. ⁣ ⁣ The Amazon needs more than our prayers. So what can YOU do?⁣ ⁣ ✔ As an emergency response, donate to frontline Amazon groups working to defend the forest. ⁣ ✔ Consider becoming a regular supporter of the Rainforest Alliance’s community forestry initiatives across the world’s most vulnerable tropical forests, including the Amazon; this approach is by far the most effective defense against deforestation and natural forest fires, but it requires deep, long-term collaboration between the communities and the public and private sectors. ✔ Stay on top of this story and keep sharing posts, tagging news agencies and influencers. ⁣ ✔ Be a conscious consumer, taking care to support companies committed to responsible supply chains.⁣ Eliminate or reduce consumption of beef; cattle ranching is one of the primary drivers of Amazon deforestation. ✔ When election time comes, VOTE for leaders who understand the urgency of our climate crisis and are willing to take bold action—including strong governance and forward-thinking policy.⁣ ⁣ #RainforestAlliance #SaveTheAmazon #PrayForAmazonia #AmazonRainforest #ActOnClimate #ForestsResist #ClimateCrisis 📸: @mohsinkazmitakespictures / Windy.com

Two other widely shared photos were also misleading. French president Emmanuel Macron, who has pushed one of the firmest responses to the fire from an international leader, tweeted an image by photographer Loren McIntyre, who died in 2003. Soccer player Cristiano Ronaldo, whose 181 million Instagram followers make him the most popular user on the platform, shared an image shot by Lauro Alves for Getty in 2013, according to a caption accompanying the image on the Baltimore Sun‘s website.

Given how dire the situation is, it’s crucial we share real, current photos of the fire. Here are some of the most striking images that actually show the current fires in the Amazon: