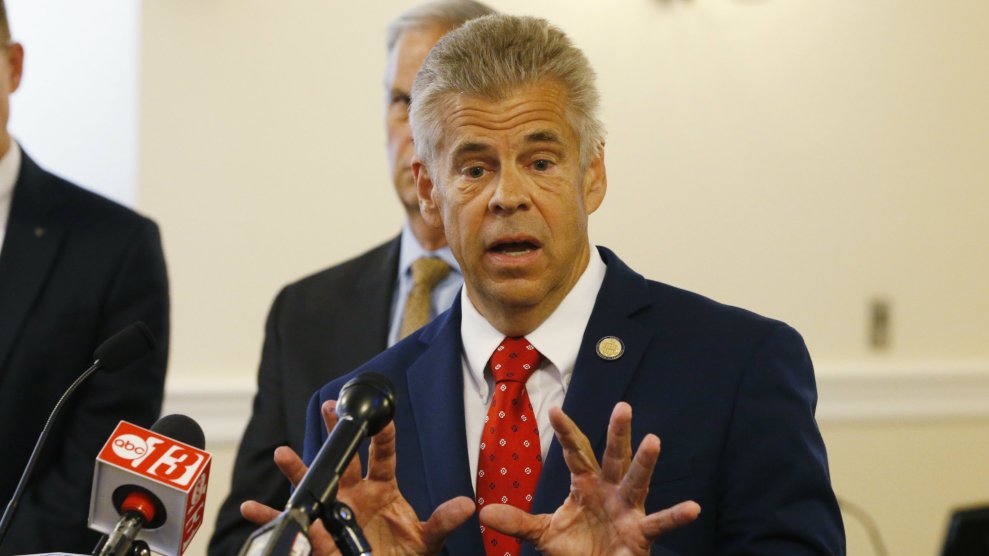 Days before the Virginia House of Delegates was set to consider two nondiscrimination bills in January, gay and transgender activists were excited for what they thought would end in a long-sought victory. For years, LGBTQ activists in Virginia had been working to pass laws that would ban discrimination in housing and government employment based on sexual orientation and gender identity. And it was looking good that these bills, which a GOP majority House had held up for years, would finally move forward: Thanks to a blue wave in the state’s 2017 elections, the House’s Republican majority had significantly thinned out. And with support of several House Republicans on the two bills, LGBTQ progress seemed more than promising.

But right before the dual bills were scheduled to be heard in committee, they were suddenly removed from the agenda by Republican House leadership and not rescheduled before the legislative session ended, sparking outrage from LGBTQ supporters. Marty Rouse, national field director for the Human Rights Campaign, called the move “shameful,” and James Parrish, executive director of Equality Virginia—the state’s leading LGBTQ advocacy group—said Virginia voters “simply have no appetite for discrimination” from their elected officials.

LGBTQ advocates directed the blame at two men: House majority chair Tim Hugo and Speaker Kirk Cox, a Republican representing the state’s 66th district who’s comfortably held his seat since 1990 and is up for reelection this fall. But come November, Cox might face a tougher challenge: LGBTQ advocates are gearing up to launch a massive campaign against Cox. And thanks to redrawn district lines, which the Supreme Court recently reaffirmed, they have better odds of booting Cox, flipping the state’s House of Representatives, and ending this years-long battle for LGBTQ rights.

Virginia doesn’t currently have laws to protect residents from being fired (or not hired in the first place) because of their sexual orientation or gender identity. Similarly, there aren’t any discrimination protections for LGBTQ residents seeking housing. For years, fighting these issues has been a priority for state LGBTQ advocates. One of former Democratic Gov. Terry McAuliffe’s last actions before he left office was to sign an executive order to protect gay and transgender state contractors from workplace discrimination. The state’s current governor, Democrat Ralph Northam, signed a similar, more expansive version of that executive order shortly after he was sworn to office, which extended to state employees.

It was a promising step for LGBTQ advocates, but the legislation that Equality Virginia had pushed would go farther, codifying a law to permanently protect all employees from employment discrimination based on sexual orientation or gender identity. Similarly, the housing bill adds an amendment to the Virginia Fair Housing Law barring housing discrimination for the same reasons.

“The priorities for us in the past few years has been passing updates to the non-discrimination laws,” Parrish says. “And the Republican-controlled Senate has been supporting these bills now for at least four years, so there’s a long record of bipartisan support there.”

But not everyone was surprised by Cox’s move. Democratic Delegate Danica Roem, who was elected as part of the blue wave in 2017 and is the state’s first transgender representative, says she expected it “because the speaker doesn’t want them to pass.”

“I think the facts speak for themselves in this manner in that we have had very, very few pieces of inclusive, nondiscrimination measures that actually ever advanced out of House committees,” says Roem, who co-sponsored a similar equality bill.*

According to LGBTQ advocates, Cox and Hugo put “pressure on members of their caucus” to pull the bills from committee, Metro Weekly reports. Though Cox hasn’t said anything publicly about the two nondiscrimination bills (and didn’t respond to Mother Jones‘ request for comment), he has a history of siding against LGBTQ rights in Virginia. In 2014, when the state’s attorney general, Mark Herring, announced he would not defend Virginia’s ban on same-sex marriage, Cox attacked his position. Cox told NPR at the time that “the attorney general has a constitutional and statutory obligation to enforce and defend the duly adopted laws and constitution of Virginia.”

Since 2015, the GOP has controlled both Virginia’s Senate and House of Delegates, but since 2017, the blue wave has pushed the entire state more toward the left. “We don’t live in 1980 anymore, and it’s time for us to get past this and not discriminate against a community when most people don’t have a problem with this community,” one Republican delegate told the Washington Post. But ever since the Supreme Court threw out a challenge to the state’s legislative map last month, upholding a redistricting map that could boosts the Democrats’ chance at retaking the House, Parrish says Equality Virginia is ready to do whatever it takes to unseat Cox.

“If you’re evaluating your legislators on the totality of their record, you have to look at the record as opposed to just rhetoric,” Roem says. “It’s one thing to say nice things in your district. It’s another thing to actually get it done.”

The GOP currently holds a a two-seat majority in both bodies of the assembly. In the newly redrawn legislative map that was approved by a federal court in February, Democrats hold an edge to retake control in several Republican-held districts, including Cox’s, which lies just below Richmond in the center part of the state. According to projections based on census data and past voting patterns from the 2012 presidential election, the 66th District is expected to swing a full 32 points toward Democratic control, tilting the new district lines slightly in favor of Democrats.

“We’ve identified just over 7,000 LGBT voters in the new parts of this district,” Parrish says. He says Equality Virginia plans to tour the state this summer to host educational campaigns on the election and how the changes to the legislative map will affect voters—especially those who support LGBTQ rights.

And they’re getting help from national LGBTQ advocates: the Human Rights Campaign tells Mother Jones that they’ll be deploying resources to help Equality Virginia unseat Cox. “HRC will be going door to door and engaging our 10,000 plus equality voters in Cox’s district, and millions more across Virginia, to put him out of a job come November,” says Lucas Acosta, an HRC spokesperson.

Cox has two challengers for November so far: Linnard Harris Sr., an independent candidate, and Sheila Bynum-Coleman, a real estate agent running on the Democratic ticket. Bynum-Coleman tells Mother Jones she supports both of the nondiscrimination bills and also blames Cox for not pushing them through to a committee vote. “It’s hurtful to our democracy that the leader of the House of Delegates will not allow a bill to come to the floor that has enough votes to pass when it’s stuff that he doesn’t agree with,” she says. “It hurts our democracy.”

Both Equality Virginia and the Human Rights Campaign told Mother Jones they haven’t made any endorsements yet, but Acosta emphasizes the importance of the election: “If we want to see change in Virginia,” he says, “Cox must go.”