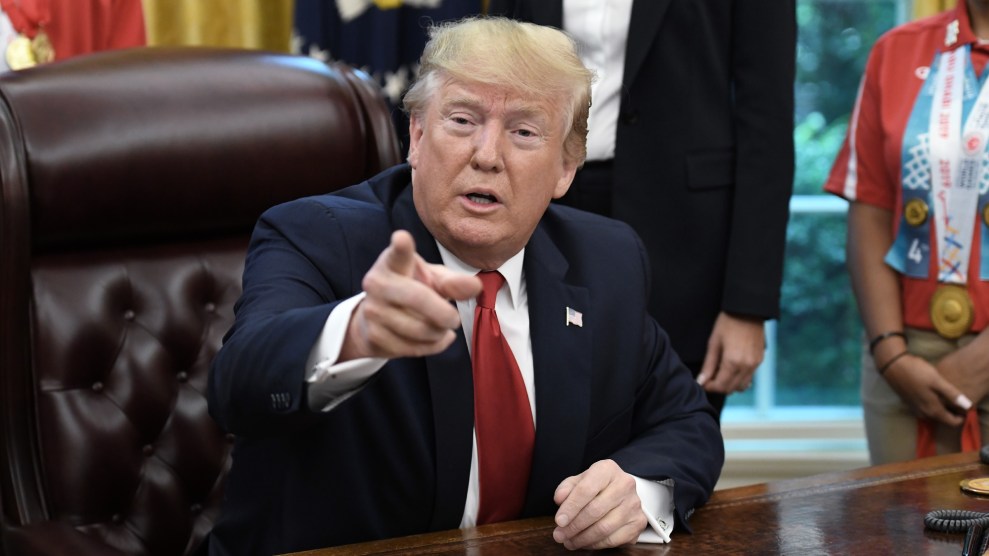 On Thursday evening, Donald Trump announced that he will nominate Gene Scalia, the son of former Supreme Court Justice Antonin Scalia and a prominent conservative lawyer in his own right, to serve as labor secretary.

I am pleased to announce that it is my intention to nominate Gene Scalia as the new Secretary of Labor. Gene has led a life of great success in the legal and labor field and is highly respected not only as a lawyer, but as a lawyer with great experience….

If confirmed by the US Senate, Scalia will replace Alex Acosta, who stepped down following outrage of a plea deal he oversaw in Jeffery Epstein’s case in 2007. But Scalia may face an uphill battle in the confirmation hearings. George W. Bush nominated Scalia to serve as the Labor Department’s top lawyer, but Democrats blocked his confirmation—then-North Carolina Sen. John Edwards objected because Scalia lacked “necessary empathy for workers”—and Scalia was forced to just serve as a temporary recess appointment.

Back in 2014, I profiled Gene Scalia for our magazine, detailing how, following his time in Bush’s White House, he made a name for himself as Wall Street’s go-to lawyer for challenging Dodd-Frank, the 2010 legislation that placed restrictions on the banks following the Great Recession. As I wrote at the time, Scalia successfully used the courts to water-down the law.

In less than five years, the 50-year-old son of Supreme Court Justice Antonin Scalia has become a one-man scourge to the reformers who won a hard-fought battle to pass the 2010 Dodd-Frank Act to rein in the out-of-control financial sector. So far, he’s prevailed in three of the six suits he’s filed against the law, single-handedly slowing its rollout to a snail’s pace. As of May, a little more than half of the nearly four-year-old law’s rules had been finalized and another 25 percent hadn’t even been drafted. Much of that breathing room for Wall Street is thanks to Scalia, who has deployed a hyperliteral, almost absurdist series of procedural challenges to unnerve the bureaucrats charged with giving the legislation teeth.

Scalia did not merely affect the rules he directly challenged. The lawsuits on behalf of Wall Street created concern among federal bureaucrats about future challenges, slowing down implementation of other rules.

Scalia has “created this sense that we’re paralyzed, because if we write a rule we’re just going to be reversed,” says Lisa Donner, executive director of the watchdog group Americans for Financial Reform. The threat of more suits, she says, has “cast a real chill” over Wall Street regulators, particularly at the Securities and Exchange Commission (SEC).

Read the rest of my profile of Trump’s new labor secretary here.