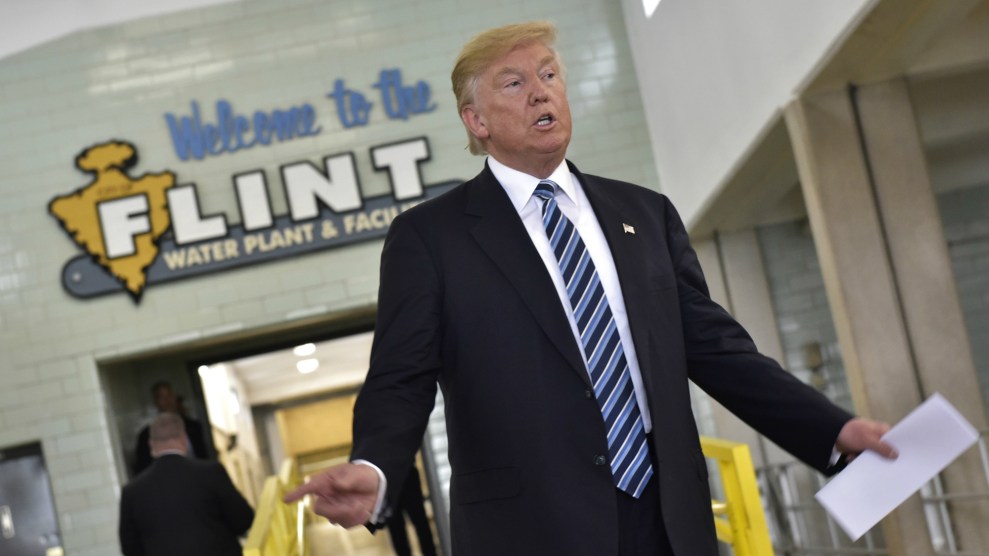 Donald Trump on a tour of the Flint, Michigan water plant in 2016, when he was the Republican presidential nominee.Mandel Ngan/AFP/Getty

Donald Trump plans to go on the offensive against criticism of his industry-friendly rollbacks of environment protections in a speech on Monday, according to three sources familiar with the plans.

Trump will tout America’s clean air and water, although his administration has advanced many efforts that experts say have undercut the country’s environmental record.

As Democrats make the environment and the climate crisis key to their presidential campaigns, Republicans are feeling pressure from voters from across the political spectrum who worry about the planet and public health.

Trump has little to point to in terms of environmental achievements. He could discuss a US effort to clean up marine debris, much of which is coming from Asia. The issue could fit well with Republican arguments that developing nations like China are currently contributing far more to the climate crisis than the US.

Trump could also mention funds to restore the Florida Everglades. He is not expected to make any major announcements of new policy initiatives.

Yet in an off-the-record conference call on Wednesday, the White House reached out to key supporting groups requesting they spread the message that the US under Trump continues to be an environmental leader.

The president himself has denied that humans are heating the planet and endangering themselves. Yet the White House remains constrained by competing conservative interests who disagree about which climate change messaging the administration should pursue.

Some groups, like the Competitive Enterprise Institute and Heartland Institute, do not believe the science that shows humans are heating the planet at a dangerous rate and want the president to focus on expanding fossil fuel use. They support an aide pushing climate denial from the White House.

A small faction of Republicans want the party to acknowledge the problem but disagree with the kind of solutions Democrats propose, including a Green New Deal for massive climate mitigation spending and programs to tackle inequality.

Sarah Hunt, a conservative co-founder of the cross-partisan Rainey Center, said Trump should use the opportunity to endorse America’s emissions cuts so far.

“American energy innovation allows our nation to lead the world in greenhouse gas emissions reductions—we’ve cut our emissions over 10 percent since 2005,” Hunt said. “The president should be proud that American natural gas, wind and solar energy are creating jobs and fighting climate change. I would love to see him announce an initiative that will help our great American clean energy companies export their zero-carbon energy technology to the rest of the world.”

Trump could argue that promoting cheap energy around the world will lift up the poor, even if that energy is fueled by polluting coal, oil and gas.

Myron Ebell, energy and environment director at the Competitive Enterprise Institute, said he wants the president to say that “the alternative to the Green New Deal is not carbon taxes and making people poorer. It’s the Trump energy agenda, which makes people wealthier. Wealthier is healthier, the wealthier we are, the higher our environmental quality.”

Trump officials often state that the US has grown its economy while seeing a decrease over time in emissions.

It’s true that US emissions have been in decline for years, but they went up in 2018, according to the Energy Information Administration. And they are not on track to achieve what scientists say is necessary to limit the worst of global warming.

The president and his cabinet also argue the US has the cleanest air in the world, which is not true, although the US does outrank many other nations on air quality.

US deaths related to certain types of air pollution also decreased by around a third between 1990 and 2010. Still, the American Lung Association finds that 43 percent of Americans live in counties with unhealthy air. The health burden is often higher for poor people and communities of color.

Air pollution is increasing in some areas of the US, as Trump’s administration cuts the regulations that have achieved that cleaner air.

Most recently, the EPA finalized a proposal to replace an Obama-era climate change rule to cut pollution from the electricity sector with a regulation that will do almost nothing to cut emissions and could increase air pollution in some communities.

Contacted for comment, a White House spokesperson confirmed the president’s plans: “The President will deliver remarks at the White House on Monday and recognize his administration’s environmental leadership and America’s role in leading the world.”