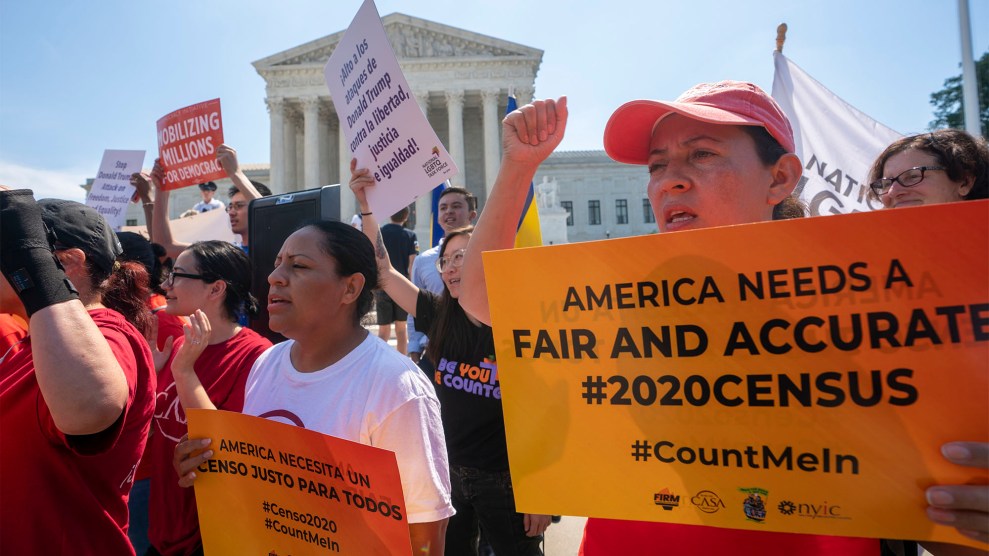 Demonstrators gather at the Supreme Court as the justices issue a decision on the constitutionality of asking a citizenship question on the 2020 census, June 27, 2019. J. Scott Applewhite/AP

In a shocking reversal, Justice Department lawyers told a federal court on Friday that they were exploring how to revive the Trump administration’s push to put a citizenship question on the 2020 census, just three days after the department told the courts and Commerce Secretary Wilbur Ross announced that the census forms would be printed without the question.

In response, Maryland federal district court judge George Hazel reopened discovery in a case looking at whether the administration added the question to intentionally discriminate against Hispanics, based on smoking-gun evidence, uncovered after the death of the GOP’s longtime gerrymandering mastermind, Thomas Hofeller, showing that he had pushed for the question in order to draw new political districts that he said would be “advantageous to Republicans and Non-Hispanic Whites.”

“The Departments of Justice and Commerce have been asked to reevaluate all available options following the Supreme Court’s decision and whether the Supreme Court’s decision would allow for a new decision to include the citizenship question on the 2020 Decennial Census,” the department wrote in a new filing. It said the administration was looking for a “new rationale” to justify the question, although the brief didn’t specify what that would be.

Last week the Supreme Court blocked the addition of the question and said the administration had to come up with a better rationale for it if it ever sought to again add it to the Census. The administration’s argument that the question was needed to better enforce the Voting Rights Act was “contrived,” Chief Justice John Roberts concluded. The administration had long maintained in court that July 1 was the deadline for finalizing the census forms, and after the high court’s decision, on Tuesday both the Justice and Commerce Departments said the 2020 census would proceed without the citizenship question.

But on Wednesday morning, President Donald Trump angrily tweeted the opposite, claiming that his administration was “absolutely moving forward” with its push to reinstate the question, calling statements from the Commerce Department and Justice Department “FAKE!”

Justice Department lawyers seemed caught off guard by the president’s tweet, and in a surreal telephone hearing on Wednesday afternoon they told Judge Hazel that they had “been instructed to examine whether there is a path forward, consistent with the Supreme Court’s decision, that would allow us to include the citizenship question on the census.” Hazel said the government’s contradictory position was “increasingly frustrating,” and compared the administration’s lawyers to Facebook litigators whose court statements might be contradicted by public statements from CEO Mark Zuckerberg. “I don’t think you speak for your client,” Hazel said, explaining what he would tell such a Facebook lawyer.

Trump has told aides that reinstating the question “should be the administration’s priority in the coming days,” according to a Thursday Washington Post article, which reported the president was being encouraged to continue to fight for the question by top figures in the conservative legal movement, including Leonard Leo, president of the Federalist Society. The president is reportedly considering an executive order instructing the Commerce Department to add the question—potentially as some sort of addendum to the regular census form. That move could be constitutionally suspect, not only because the administration would need to provide a rationale for the question to satisfy the Roberts court’s ruling, but because Congress, not the president, possesses the authority to add questions.

Trump’s aggressive lobbying for the question’s addition shows how big the stakes are. The census determines the allocation of $880 billion in federal funding, how much representation states receive, and how political districts are drawn. If immigrant communities don’t respond to the census out of fear that the administration will use their citizenship information to initiate deportation proceedings against them, their families, or their communities, that would shift economic and political power to areas that are whiter and more conservative.

Notably, the president has never mentioned a desire to enforce the Voting Rights Act—the administration’s principal, and now rejected, rationale for adding the question—in his numerous tweets and public comments about the issue. In fact, on Friday morning, Trump told reporters that the “number one” reason the question was needed was “for Congress for districting,” which suggested that Republicans, if allowed to collect citizenship data, would use it to exclude non-citizens from counting toward voting district populations, as Hofeller had advised—a step which would again boost representation for white Republicans.