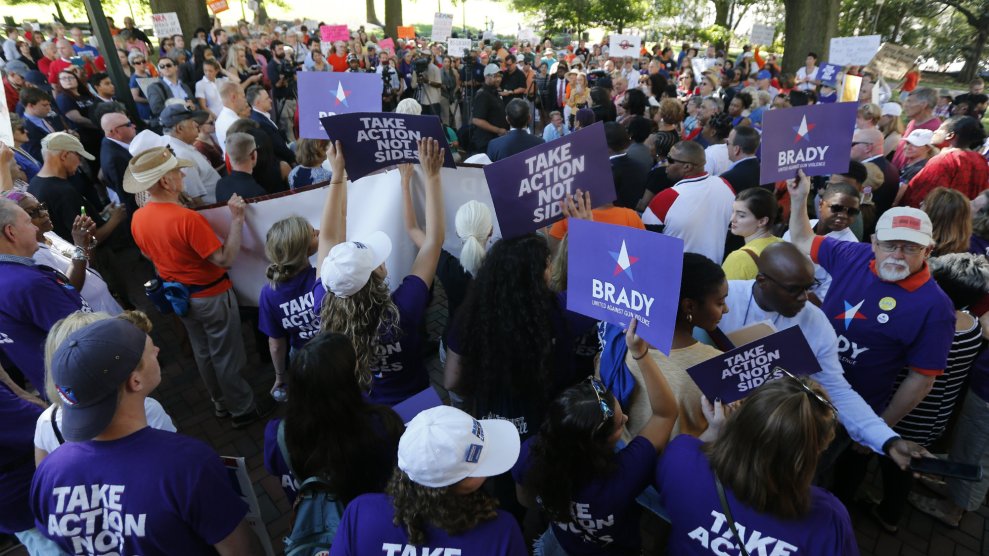 Tuesday was supposed to be a big day for Virginia legislators to have serious discussions about gun control in the state. Following the mass shooting at the Virginia Beach Municipal Center in May—which left 12 people dead, one of the state’s deadliest mass shootings in years—Democratic Gov. Ralph Northam called for a special session of the state’s general assembly with the goal of passing stricter gun control laws. But the session ended after just 90 minutes, with the state’s GOP-controlled general assembly adjourning without voting on any of the dozens of gun control bills introduced by members of both parties. The Washington Post reported that the state Senate and House of Delegates voted to adjourn the session until November 18—right after the state’s midterm elections.

The move was immediately criticized by Virginia Democrats and gun control advocates, hundreds of whom rallied in front of the state capitol prior to the session. Northam issued a statement after the session, saying that it was “shameful” and “disappointing” that Republicans in the General Assembly didn’t take any action, adding that he “expected better” of GOP legislators.

In a phone call with Mother Jones, Virginia Del. Danica Roem, the state’s first transgender representative who has been a vocal advocate for stricter gun control laws in the state, said she didn’t think the Republican members’ actions were acceptable. “The reality here is that this is an issue that is extremely close to home for me and for a lot of my constituents,” she said.

Among the legislation that wasn’t voted on today was a Red Flag law, or an extreme protection order law, which allows a judge to issue an order for law enforcement to confiscate an individual’s gun if they’re deemed a risk to themselves or others. It’s an idea that has seen bipartisan support—including from President Donald Trump and Attorney General William Barr—since the mass shooting at Marjory Stoneman Douglas High School in Parkland, Florida last year.

Roem said that the bill should have been a priority for her GOP general assembly colleagues, as it’s a proven effective way to curb suicide by firearms rates. “I know this one from a very dear friend who survived an attempted hanging,” Roem tells Mother Jones. “And I think about this and I think about how an extreme protection order can be the difference between someone living and someone dying.”

With Virginia’s upcoming midterm election in November set to be a pivotal one, the issue of gun control is quickly becoming one of the bigger issues for both the state’s election and for the 2020 presidential election. “We know that more people will die by gun violence between now and November 18,” Roem says. “And the Virginia general assembly will have done nothing, in terms of dealing with it.”