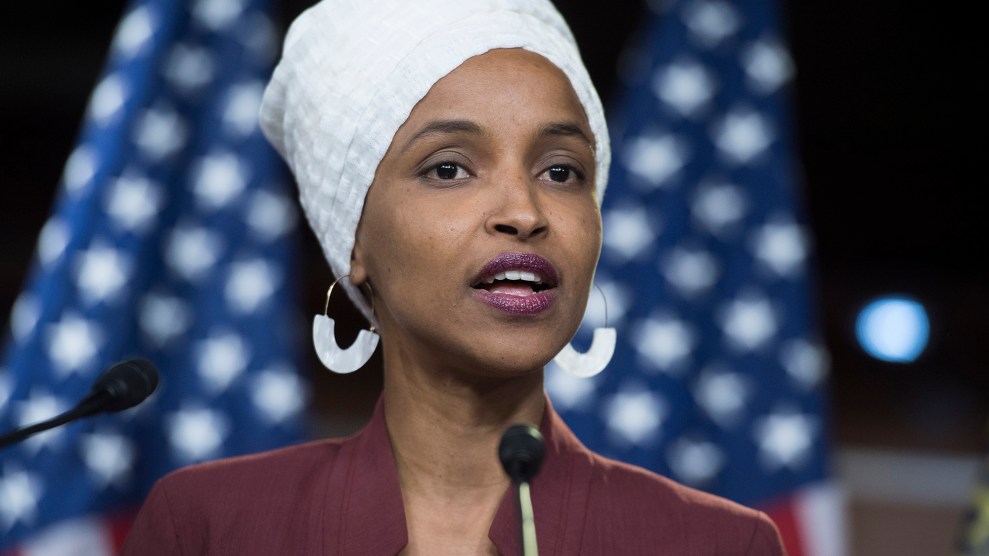 On Wednesday, President Trump gave credence to a smear against Rep. Ilhan Omar (D-Minn.) when he told reporters that there was “a lot of talk about the fact that she was married to her brother,” and that he was “sure that somebody will be looking at that.”

It was almost only a matter of time before the smear, an unfounded accusation which started in fringe corners of the internet, earned the ultimate far-right cosign of being mentioned by Trump. The rumor appears to have started three years ago, but begun catching more serious online attention in recent months as Omar came under increasing right-wing attacks. According to an analysis of tweets by Zach Verdin, a partner at the pro-democracy independent research collective Guardians.ai, messages including the words “Ilhan Omar,” “brother,” and “marriage” had significant spikes in the spring. On April 16, after an article purporting to substantiate the claim was circulated by OANN host Jack Posobiec, it was mentioned in 7,880 tweets.

In the run-up to that peak, smaller spikes correlated with right-wing media sites publishing stories on the smear, illustrating how the conservative media eco-system can boost unfounded accusations and conspiracies into the mainstream.

Last summer, on August 8, 2018, Alpha News and PJ Media published a story about the smear. Days later, a right-wing troll and former Project Veritas staffer crashed a campaign event supporting Omar before her election to Congress, accosting people there over the candidate’s supposed marriage to her brother. One of the first such Twitter spikes came shortly after that incident, when, on August 13, 2018, there were 242 posts mentioning the smear. That same day, conservative outlets with a track record of spreading misinformation, including PJ Media again, published stories relaying the claim.

The next spike of over 2,250 tweets came on October 29 when a PJ Media story from August claiming to present school records substantiating the theory recirculated on Twitter. PJ Media followed up the next day by publishing a new story. And again, on October 27, Alpha News published another story pushing the smear. Another spike came on Feb. 14, after Posobiec tweeted about the claim, garnering over 2,000 retweets.

On June 23, Minnesota’s largest newspaper, the Minneapolis Star–Tribune, examined the accusation in a long article that detailed Omar’s marriages to two men, her dismissals of the claim one was her brother, and incidents where she or her campaign declined to provide reporters information or arrange interviews that could help verify her story. While the article’s lede sentence boasted that “New investigative documents released by a state agency have given fresh life to lingering questions about the marital history of Rep. Ilhan Omar,” those documents, related to a state inquiry into whether Omar’s campaign violated spending rules by hiring an accountant to resolve tax issues related to her marriages, offered nothing to support the claim she had married her brother. The article noted that the newspaper’s broader review of public records “could neither conclusively confirm nor rebut the allegation” that a man Omar had once been married to was her sibling. Following the article’s publication, the accusation that Omar had married her brother was mentioned 2,800 times on Twitter, partially with the help of right-wing media consultant Caleb Hull who boosted the story.

A jumping-off point for most of the Omar marriage claims appears to have been an August 13, 2016 post by Alpha News, a hyper-partisan Minnesota-based website that, according to the Star Tribune, has connections to the state’s Republican and tea-party groups. The story was pointed out to Mother Jones by Ben Decker, who runs the media and tech investigations consultancy Memetica.

The Daily Beast reported that it had found a slightly earlier instance of the claim being pushed from an anonymous account with a history of false posts on Somali Spot, an immigrant diaspora forum. The poster, “AbdiJohnson” wrote a now-deleted thread from August 2016 titled “ILHAN OMAR MARRIAGE FRAUD EXPOSURE.” Despite lacking any evidence, Powerline, a popular right-wing blog based in Minnesota, picked up the claim and cited Somali Spot on August 12, 2016, according to an article examining the rumor published by Snopes in February.

As highly-partial, right-wing actors have spread extremely flimsy information purporting to back up the claim, they’ve formed a wall of conservative media, that, within its borders, has protected the rumor from serious interrogation. All of this came to a head this week when Rush Limbaugh, who Trump is a professed fan of, said on Monday that Omar “married her brother illegally,” according to the Daily Beast. On Wednesday a reporter from the far-right outlet OANN asked Trump about the claim at a gaggle outside of the White House. His response provided an endorsement, and completed the smear’s ascension from an anonymous post on an obscure message board into a mainstream conspiracy theory with the backing of the President of the United States.

To Decker, who formerly researched internet extremism and misinformation at Harvard’s Shorenstein Center, the Omar smear is just the latest and most successful unsubstantiated claim or hoax to travel a well-established trail from the fringe right to the mainstream.

“We know that the hyper-partisan media pipeline has a tendency to bump around claims from 4chan and Twitter,” Decker said. Hyper-partisan media was pivotal in helping spread earlier hoaxes that became mainstream, like the notion that liberal financier George Soros funded last fall’s migrant caravan, or that the recent series of bombing threats targeting top liberal figures were a false flag.

Decker says that right-wing sites don’t play by the same rules as mainstream outlets, operating with a completely different regard for what is and isn’t factual: For right-wing hyperpartisan outlets, things don’t have to exist to be reported. There only has to be the question of their existence, he says.

“It offers a lot of space to push out a lot of partisan theories. You can ask them as a question. ‘Did Ilhan Omar marry her brother?’ without the standard of having to prove that she did,” Decker said. “It purports itself as a noble truth-finding thing, but it’s actually a veil around Islamophobia and other bigotry.”