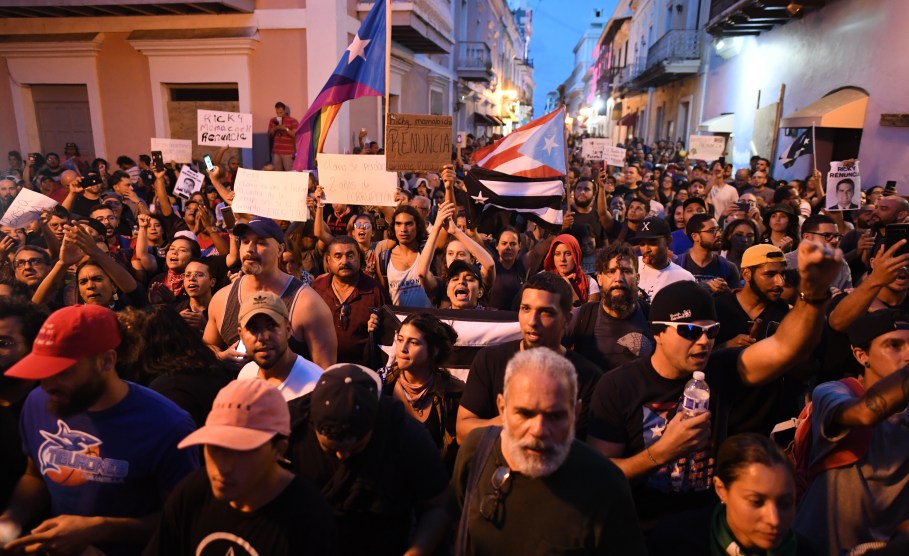 Puerto Rico's rainbow flag, meant to symbolize the island's queer and trans communities, can be seen along with the resistance flag in the crowd of protesters. Luis Alcala Del Olmo/El Nuevo Dias via Zuma

Thousands of Puerto Ricans took to the streets this week calling for the resignation of the island’s governor, Ricardo Rosselló. The protests were ignited when the island’s Center for Investigative Journalism published nearly 900 pages of text messages full of misogynistic and homophobic comments shared between Rosselló and his advisers. The scandal, dubbed #TelegramGate and #RickyLeaks online, comes less than two weeks after the FBI arrested six former members of the Rosselló administration on fraud-related charges.

Starting on Monday, Puerto Ricans who were fed up with up with government corruption and neglect organized demonstrations in San Juan and in cities throughout the world, including New York City, Chicago, San Francisco, and Madrid. In less than a week, the hashtag #RickyRenuncia (#RickyResign) has been posted nearly twenty-five thousand times on Instagram alone. On Wednesday, #RickyVeteYa was trending on Twitter. On Tuesday, Rosselló announced he would not be resigning from his post, stating: “I have not committed any illegal acts, or corrupt acts. I committed an improper act.” Two members of Rosselló’s cabinet have resigned.

Prominent Puerto Rican artists like Ricky Martin (who was mentioned in the leaked text messages), Lin-Manuel Miranda, Daddy Yankee, and Latin Trap star Bad Bunny have all taken to social media to support the protests. Bad Bunny dropped a protest song following the scandal. “Y que se enteren todos los continente’ / Que Ricardo Rosselló es un incompetente / Homofóbico, embustero, delincuente / A ti nadie te quiere, ni tu propia gente. (And let all of the continent know / that Ricardo Rosselló is an incompetent / homophobic, lying, delinquent / no one wants you, not even your own people),” he rapped. “I want to pay my respects to all the people who have always had the bravery, courage and initiative to go out into the streets and fight for the sake of our country,” he said in a video posted on Instagram. On Wednesday, Martin and Bad Bunny were both said to be in attendance at another protest march in San Juan.

Last week I reported on the history of a black and white version of the Puerto Rican flag, which has come to be known as the resistance flag. As I wrote:

Today, many Puerto Ricans feel suffocated by the island’s social and economic crisis. The population is rapidly dwindling, schools are closing en masse, entire communities have no access to hospitals, and 44 percent of people live in poverty.

The flag is “used as a symbol of resistance to colonialism,” explains Jorell A. Melendez-Badillo, a historian of Latin America and the Caribbean at Dartmouth College. The resistance flag could be seen flying high during this week’s protests in San Juan, as you’ll note in some of the photos below.