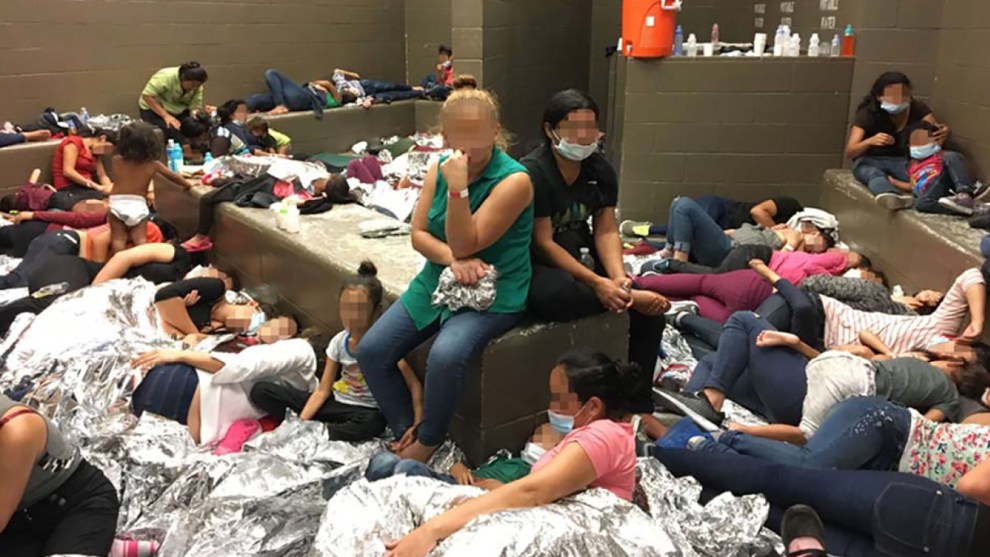 As part of a critical report released Tuesday, the Department of Homeland Security’s Office of Inspector General made public harrowing photographs from inside US Customs and Border Protection holding facilities in Texas. The photos, taken by OIG investigators at Border Patrol facilities in the Rio Grande Valley during the week of June 10, show the extreme overcrowding and unsanitary conditions that have been in the news since a draft of the report was leaked to the media last week.

The report lists multiple occasions when CBP violated its detention policies and notes several “urgent issues that require immediate attention and action.” Among the most serious violations were a failure to provide adequate room for adults to sit (let alone lay down), no access to showers for many men for weeks, and no hot meals for children. (The report says most kids were given sandwiches and that the facilities kept infant formula and snacks.)

Also, some 50 unaccompanied minors younger than 7 had been held in an overcrowded facility for more than two weeks. By law, children should be transferred to the custody of the US Department of Health and Human Services within 72 hours of being apprehended by CBP.

“We ended our site visit at one Border Patrol facility early because our presence was agitating an already difficult situation,” the report’s authors wrote. “Specifically, when detainees observed us, they banged on the cell windows, shouted, pressed notes to the window with their time in custody, and gestured to evidence of their time in custody” by pointing to their overgrown beards.

According to the report, some men had been crowded in standing-room-only cells for a week. A holding cell with a maximum capacity of 41 had 88 men jammed inside. Most adults did not shower while housed in the facility, even though several were detained as long as a month. They were wearing the same clothing they had on when they arrived weeks prior, and some were given only wet wipes “to maintain personal hygiene.”

CBP is responsible for providing short-term detention of migrants detained at the border and is required to transfer them to the custody of either Immigration and Customs Enforcement or, if they are underage without parents, the Department of Health and Human Services. But the OIG report notes that more than half of the 8,000 people held by Border Patrol at the time of the inspections had been detained well beyond the 72-hour limit for these facilities; agency standards state that “every effort must be made to hold detainees for the least amount of time required for their processing, transfer, release, or repatriation as appropriate and as operationally feasible.”

CBP has said that it has to hold migrants longer than it’s allowed because both ICE and HHS are operating at or above capacity and can’t take in more people. In response to the OIG report, a DHS official said that “our immigration system is not equipped to accommodate a migration pattern like the one we’re experiencing now.”