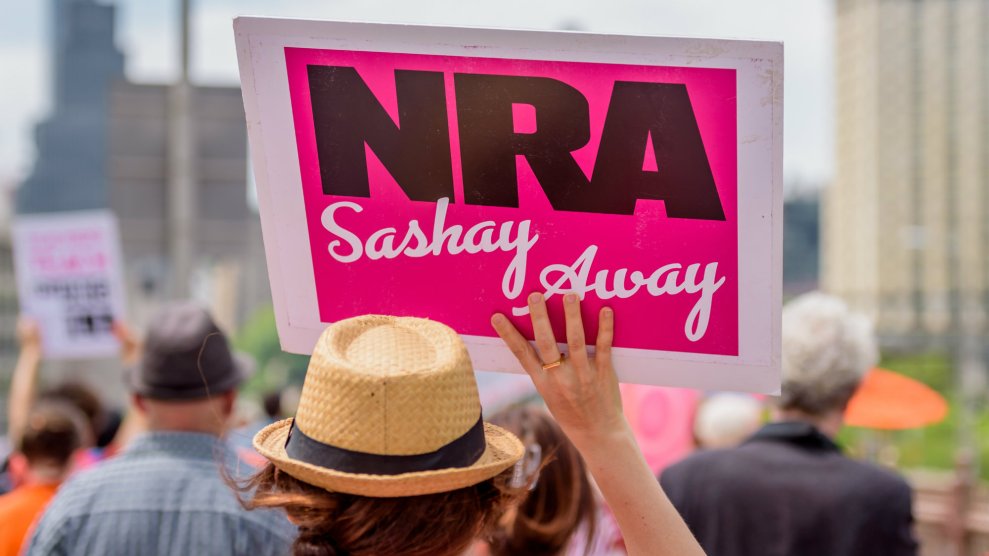 Ever since the National Rifle Association’s annual meeting in April descended into infighting and chaos among the group’s leaders, the nation’s leading gun rights group’s private drama has continued to spiral into a growing public crisis. The latest face-plant came last week, when the Washington Post published a pair of investigations detailing the NRA’s exorbitant flow of money to its board members, revealing more about the group’s questionable spending practices, possible ties to Kremlin-linked Russian operatives, and dire financial situation, which paints a portrait of an organization spending far more cash than its revenue stream should allow.

This could all amount to a giant red flag for the Internal Revenue Service to investigate the NRA’s tax-exempt status. But it’s been nearly two months since Oliver North leaked his controversial memo detailing the organization’s financial situation, and, even after numerous calls for the IRS to open an investigation, all that’s come of it is a Senate Finance Committee investigation led by ranking member Ron Wyden (D-Ore.), along with Sens. Robert Menendez (D-N.J.) and Sheldon Whitehouse (D-R.I.), which the NRA, thus far, is not cooperating with.

“It looks like there’s something wrong and I think the IRS certainly needs to investigate this,” Matthew Journy, a DC-based lawyer who counsels nonprofits on tax matters, says on the Post’s investigation. “The IRS’s job is to enforce situations like this and make sure that the funds that the NRA collects are being used for the purpose of benefiting its members, and not necessarily for the purpose of benefiting its board members.”

But Journy is not too optimistic that the IRS will intervene anytime soon. “Immediate is not a term that the IRS really follows very well,” he says.

Neither is Marcus Owens, another DC tax attorney who spent 25 years as a lawyer in the IRS’s Exempt Organizations Division—10 of those years as the division’s director. In that capacity, it was his job to implement federal tax rulings and enforce programs for exempt organizations, political organizations, and tax-exempt bonds. He was also the IRS’s primary liaison for Congress, state regulators, and other federal agencies for issues involving tax-exempt organizations. In other words, he was in the exact position to open up an investigation into the NRA.

“The NRA has an interesting orientation to legal compliance,” Owens says. He points to the GOP’s eight-year gutting of the IRS that has left the agency severely understaffed and crippled, especially in the exempt organizations area. “The number of IRS audits that are occurring now is probably well under a thousand a year, and most of those are very small organizations,” he adds.

“Immediate is not a term that the IRS really follows very well.”

Owens, who has been practicing law in the private sector for the past decade, has devoted much of his work to calling out the myriad ways the NRA has been in violation of both its tax-exempt status—its federal tax income status—and nonprofit designation, which refers to its incorporation status under state law. As a 501(c)(4), the NRA doesn’t have to operate in the same way as nonprofit charities with a 501(c)(3) designation—such as the American Red Cross, or the American Cancer Society, which are public charities whose bulk of revenue comes the general public, or state and federal funds. Most of the NRA’s revenue comes from donors and membership dues, but since it’s defined in the tax code as a civil liberties advocacy organization, the biggest difference is in its lobbying abilities: 501(c)(3)’s are pretty limited in how much lobbying they can do, while 501(c)(4)’s can engage in unlimited lobbying so long as its related to its purpose (in the case of the NRA, guns).

But, as the allegations in North’s letter and the Post‘s reporting suggests, much of the NRA’s net earnings have been funneled right back to the people whose job it is to steer the organization’s finances in the right—and legal—direction. As the Post reported, former NFL star Dave Butz received $400,000 from the NRA over a two-year period for “consulting,” while former board president Pete Brownell, who owns a firearms supply company, sold nearly $3.1 million in supplies and ammunition to the NRA Foundation, its charitable division. That’s just a sampling of the millions of dollars that went to the organizations own board members—enough to make former NBA star Karl Malone, who also serves on the NRA’s board, concerned about the allegations (and he told the Post that dues-paying members should also be “damn concerned”).

One of the most glaring examples of the NRA’s abuse of its tax-exempt status began in 2008, when the IRS created a revised Form 990—the tax return that every nonprofit has to file—that required disclosure of political lobbying activity (for the NRA, that would be the Institute for Legislative Action, the organization’s official lobbying arm since 1975). But the NRA didn’t disclose any financial transactions with its PAC—nor did it in every subsequent year until 2014.

“The NRA simply ignored the requirement, for a complete and accurate return, yet signed the return as being true, complete, and accurate,” Owens says. “The NRA filed false tax returns.”

Despite these issues, it’s not the IRS but the New York State Attorney General, Laetitia James, who “poses an existential threat” to the organization, Owens says. Days after the NRA’s annual meeting in April, James opened a probe into allegations of self-dealing. James’ probe, though, could dig into the nature of the NRA’s lobbying activity, which would threaten its existence as a charity.

In November of 2018, Owens sent a long letter to then-New York Attorney General Barbara Underwood, on behalf of his client, the March For Our Lives Action Fund—the gun control advocacy grouped formed by students at Marjorie Stoneman Douglas High School in Parkland, Florida—urging her to investigate the NRA. Though the organization is headquartered in Fairfax, Virginia, it was incorporated as a nonprofit in New York in 1871 and still holds that status in the state. Because of that, the New York state attorney general has the power to terminate a charity, if they find that it is in violation of the rules for charities (such as what Underwood did with the Trump Foundation).

Of all the threats to the NRA’s current existence—its own financial crises, internal power struggle, and the Senate Finance Committee investigation—the New York AG’s probe is the one that seems most likely to yield consequences.

“I think that it’s conceivable that Wyden and Menendez may come up with as-yet-undisclosed additional factual evidence of the misuse of money, but my guess is that it’s going to be the New York attorney general,” Owens says. “And what I would expect is we will start to see a flow of whistleblowers, people who don’t want to be on the wrong end of a subpoena from the state of New York.”