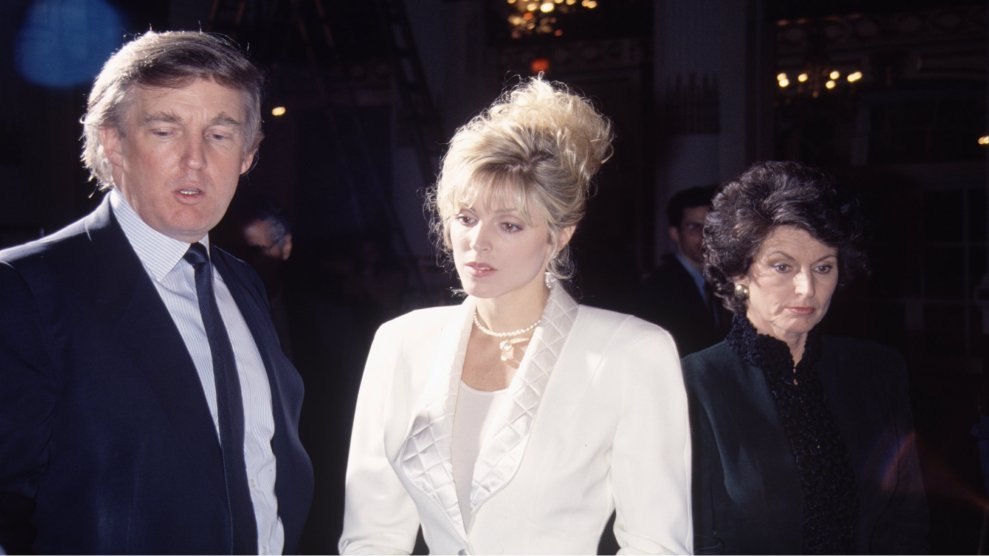 Donald Trump has been notoriously tight-lipped about his personal finances, but bit by bit, investigative journalists have produced valuable insight into the ways he has shielded and often exaggerated his fortune over several decades. Vanity Fair added another piece of the puzzle Tuesday with a story revealing details from his prenuptial agreement with Marla Maples.

The relationship began auspiciously enough—a New York Post cover had Maples famously bragging about the “Best Sex I’ve Ever Had” with Trump—but the prenup, signed a year after he divorced first wife, Ivana, was a way for Trump to protect his assets in case the marriage went south. (After four years it did indeed go south, and Maples moved to California to raise their daughter, Tiffany).

Since the beginning of his career as a real estate developer, Trump has overhyped his own wealth—even posing as a Trump Organization official to lie his way on to the Forbes list of the richest people in the world—and the prenup was no different. Despite claiming he was worth $1.17 billion on the document, Trump “in all likelihood” was not actually a billionaire at the time, Vanity Fair reported. Between 1985 and 1994, Trump acknowledged $1.2 billion in losses on tax returns uncovered by the New York Times, which kept him off the Forbes list from 1990 to 1995. “More than anything,” Vanity Fair found, “the prenup shows how fiercely Trump wanted to protect the money he did have.” The magazine continued:

Maples reportedly wanted $25 million, but Trump agreed to pay her only $1 million if they separated within five years, plus another $1 million to buy a house. Trump also would stop making $100,000 child support payments for Tiffany when she turned 21. The agreement states that Trump’s payments would cease earlier if Tiffany got a full-time job, enlisted in the military, or joined the Peace Corps.

Why would Maples ever agree to this? “She was telling people it was love,” a source who knew her told Vanity Fair. In five years, Maples had hoped Trump “would renegotiate a better deal.” That wasn’t the only baffling detail to emerge from the agreement. In financial statements included alongside the prenup, Trump reportedly valued Trump Taj Mahal in Atlantic City at $1.25 billion despite frequently missing debt payments. The casino found itself in bankruptcy court only a year after its opening. Vanity Fair has more:

He valued the Trump Castle and Trump Plaza casinos $450 million and $650 million, respectively. (Both went bankrupt in 1992.) Trump’s accountants at Spahr, Lacher & Sperber didn’t vouch for his fuzzy math. “We have not audited or reviewed” the numbers Trump provided, they stated in a note attached to the financial report. They added: “Assets are presented at current values estimated by Trump using various valuation methods.”

Assuming Trump’s tax returns remain private, these incremental stories provide the only window into how Trump built up his wealth—and all the maneuvers he used to maintain it.