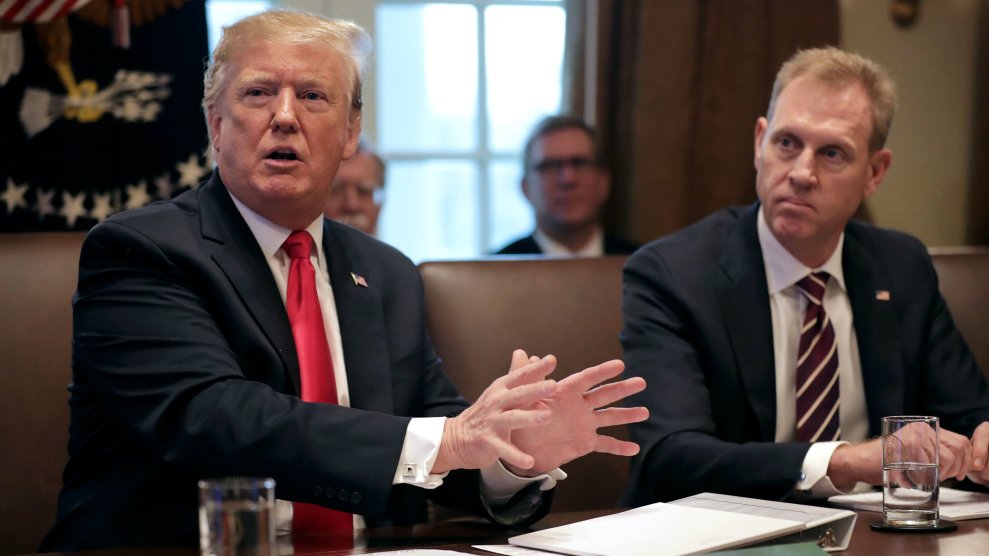 Patrick Shanahan, President Donald Trump’s acting secretary of Defense, withdrew himself from the nomination process for the permanent job Tuesday—a decision that coincided with media reports about alleged domestic violence incidents involving his ex-wife and son. Trump announced the move on Twitter and said Shanahan would “devote more time to his family.”

Acting Secretary of Defense Patrick Shanahan, who has done a wonderful job, has decided not to go forward with his confirmation process so that he can devote more time to his family….

The announcement came shortly before the Washington Post reported on an incident from November of 2011 involving Shanahan’s then 17-year-old son and Shanahan’s ex-wife, Kimberley Shanahan (now Kimberley Jordinson). According to the Post, the couple’s son, William Shanahan, severely beat his mother with a baseball bat. In the weeks after the assault, Shanahan defended his son’s action in a memo sent to his ex-wife’s brother, calling it self-defense. From the Post:

“Use of a baseball bat in self-defense will likely be viewed as an imbalance of force,” Shanahan wrote. “However, Will’s mother harassed him for nearly three hours before the incident.”

Shanahan, who served as deputy Defense secretary under James Mattis and previously spent more than three decades at Boeing, told the Post in an interview that he regrets what he wrote:

“That document literally was, I sat down with [my son] right away, and being an engineer at an aerospace company, you write down what are all of the mitigating reasons something could have happened. You know, just what’s the list of things that could have happened?”

As he later wrote in the divorce case, Shanahan said Monday that he does not believe there can be any justification for an assault with a baseball bat, but he went further in the interview, saying he now regrets writing the passage.

“Quite frankly it’s difficult to relive that moment and the passage was difficult for me to read. I was wrong to write those three sentences,” Shanahan said.

Earlier Tuesday, USA Today reported that the FBI has been examining a domestic violence dispute between Shanahan and his ex-wife from August of 2010, in which “both claimed to the police that they had been punched by the other.” According to the paper:

Both Shanahan and Jordinson acknowledged in court filings and police reports that a late-night argument on Aug. 28, 2010, after both had been drinking, spilled from their bedroom to the front yard of their Seattle home. The incident escalated into a clash that police said left him with a bloodied nose and hand and her with a blood-stained forearm. But their accounts diverged on who was to blame, as well as the claim Jordinson reported to officers and later outlined in divorce papers: that Shanahan punched her in the stomach.

Shanahan denied hitting her and told police that she was the aggressor and that she had punched him “10 to 20 times,” according to police records obtained by USA TODAY. Officers—noting in part that Jordinson’s bloody forearm appeared consistent with her having attacked her husband—arrested Jordinson on suspicion of domestic violence. Prosecutors later dropped the charge, citing a lack of evidence…“Though my marriage ended in sorrow and disappointment, I never laid a hand on my then-wife and cooperated fully in a thorough law enforcement investigation that resulted in her being charged with assault against me,” Shanahan said in a prepared statement late Monday.

Despite announcing last month that he would choose Shanahan to permanently lead the Defense Department, Trump had yet to formally make the nomination, leading Senate aides to speculate that the delay might be related to a hold-up in Shanahan’s FBI background check. “We’ve discussed the possibility of something like this popping,” a staffer for one Senate Armed Services Committee member said. A spokesperson for Sen. Jack Reed (D-RI), the top Democrat on the committee, told USA Today the senator was not aware of the incidents in Shanahan’s past. Shanahan told CNN last week that he had “no concerns” about his background check.

“I believe my continuing in the confirmation process would force my three children to relive a traumatic chapter in our family’s life and reopen wounds we have worked years to heal,” Shanahan said in the statement released after the announcement of his withdrawal. “Ultimately, their safety and well-being is my highest priority. I would welcome the opportunity to be Secretary of Defense, but not at the expense of being a good father.”

On Twitter, Trump announced that he’s naming Mark Esper, the civilian leader of the Army and a former Raytheon lobbyist, to be the new acting secretary of Defense.