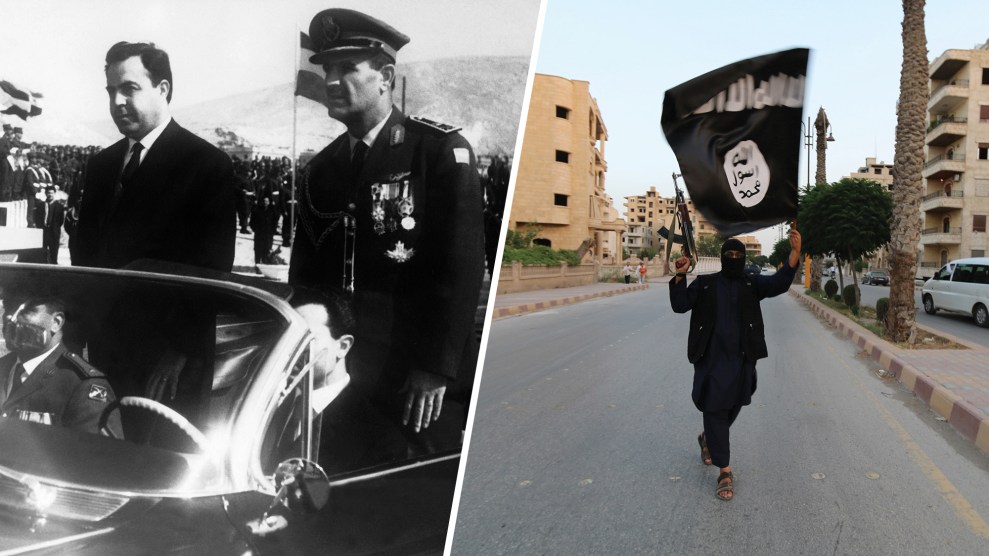 Hafez al-Assad seizes power in a coup within the Baath Party. He becomes president of Syria the following year.

Syria and the Soviet Union sign a treaty of friendship and cooperation.

In response to a Sunni rebellion in Hama, Assad’s military destroys the city and kills at least 20,000 people.

Assad dies. He is succeeded by his son Bashar, who many Syrians hope will be a reformer.

Undersecretary of State John Bolton includes Syria in a list of countries “beyond the axis of evil” that are seeking weapons of mass destruction.

President George W. Bush imposes sanctions on Syria, asserting that it has ties to terrorism.

Tensions between the United States and Syria escalate after former Lebanese Prime Minister Rafik Hariri is assassinated by a truck bomb, allegedly with help from Assad’s regime.

The United States renews sanctions against Syria, saying that it seeks weapons of mass destruction.

Protests begin in Daraa after police torture teenagers who had painted anti-regime graffiti. As mass demonstrations spread, the Assad regime cracks down violently.

President Barack Obama calls for Assad to step down.

The United States, Russia, Turkey, Iraq, and other countries meet in Geneva to discuss a transition to a “democratic and pluralistic” Syria.

The Islamic State of Iraq and Syria (ISIS) forms.

Hezbollah forces launch an offensive “to aid the Assad regime.”

The Syrian government uses sarin in an attack on Ghouta, killing more than 1,400 people. The following month, Congress rejects Obama’s request to approve a military response.

The Syrian government agrees to hand over its chemical weapons stocks for destruction.

ISIS declares the creation of a caliphate across its territory in Syria and Iraq.

Congress authorizes the Pentagon to train and arm Syrian rebels. In what will become known as Operation Inherent Resolve, the United States and its coalition partners begin airstrikes against ISIS.

As the number of refugees tops 4 million, a photograph of a drowned Syrian toddler provokes international concern over the humanitarian crisis. After reaffirming its treaty with Syria, Russia officially joins the war, carrying out airstrikes and providing military aid to Assad.

As the Obama administration’s focus in Syria shifts toward ISIS, the Pentagon says special operations troops will be deployed “to fight in Syria and Iraq.”

President Donald Trump blocks Syrian refugees from entering the United States. (Fewer than 3,100 have been admitted since he took office.)

UN Ambassador Nikki Haley says the Trump administration’s “priority is no longer to sit there and focus on getting Assad out.”

Following another chemical attack by the Syrian government, Trump announces a missile strike.

Over Turkey’s objections, Trump approves a plan to arm Kurdish forces in Syria.

After months of heavy coalition bombing and ground assaults by the US-backed Syrian Democratic Forces, ISIS is driven out of Raqqa, losing its self-proclaimed capital.

Turkey and the FSA seize Afrin, a Kurdish region in northwest Syria.

After a chemical attack in Douma, the United States, Britain, and France launch airstrikes against Syrian government targets.

US military officials report that an SDF offensive has isolated the “last pocket of ISIS resistance” in eastern Syria.

Trump announces the withdrawal of all US troops from Syria. Defense Secretary James Mattis resigns in protest.

ISIS’s remaining fighters are trapped in shrinking enclaves. Trump says he should receive a Nobel Peace Prize for his efforts in Syria. “I stopped the slaughter of perhaps 3 million people,” he says. When members of Congress request that some troops stay in Syria, Trump writes back, “I agree 100%.”

The White House says it will allow Turkish forces to invade northern Syria. Facing criticism for this unexpected move, Trump tweets “if Turkey does anything that I, in my great and unmatched wisdom, consider to be off limits, I will totally destroy and obliterate the Economy of Turkey.”