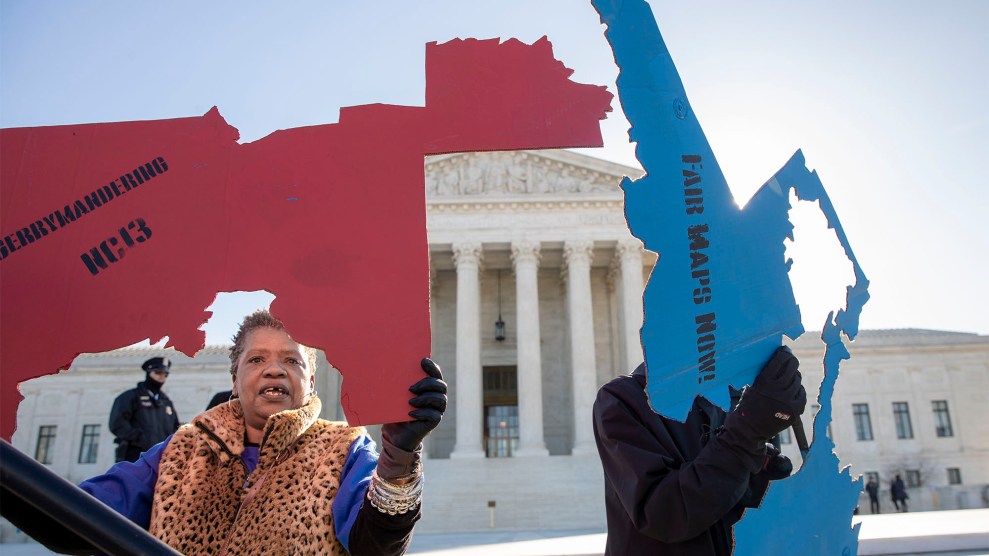 Last week heaped new controversy onto the upcoming Supreme Court decision over the Trump administration’s addition of a citizenship question to the 2020 census, with the revelation that the GOP’s longtime gerrymandering architect had initiated the push for the question in order to benefit “Republicans and Non-Hispanic Whites.” But that’s not the only pending Supreme Court case in which Thomas Hofeller, the late redistricting guru, was involved. The court is considering two lawsuits over extreme gerrymandering in which Hofeller played a key role in drawing maps to help Republicans.

Hofeller worked on redistricting in at least half a dozen states after the 2010 election, but he was most intimately involved in North Carolina. Hofeller said in a court deposition that he was instructed by North Carolina Republicans “to minimize the number of districts in which Democrats would have an opportunity to elect a Democratic candidate.” The maps he drew transformed a purple state where Democrats had a 7-6 advantage in the congressional delegation after the 2010 election into a deeply red one where Republicans held 10 of 13 districts after redistricting occurred.

Hofeller accomplished this feat by concentrating Democratic voters into three districts. He packed black Democrats into two heavily African American districts in order to make the surrounding districts whiter and more Republican. Hofeller claimed this was required by the Voting Rights Act in order to ensure that African Americans had an opportunity to elect black representatives, even though it had the effect of reducing the influence of black Democrats. (Hofeller gave a remarkably similar justification for adding a citizenship question to the census, telling the Trump administration that it would help enforce the Voting Rights Act when in fact Hofeller’s own research showed it would harm Latinos and other minority groups.)

A federal court struck down the map in 2016 as an illegal racial gerrymander, in a decision affirmed by the Supreme Court, and ordered the state to draw new congressional districts. North Carolina Republicans once again retained Hofeller, telling him “to change as few” districts as possible. “I propose that we draw the maps to give a partisan advantage to 10 Republicans and three Democrats, because I do not believe it’s possible to draw a map with 11 Republicans and two Democrats,” GOP state Rep. David Lewis, who oversaw the redistricting process, instructed Hofeller.

Hofeller did just that. Once again, he ran afoul of a federal court, which struck down the new lines in August 2018 as partisan gerrymandering. “The process Dr. Hofeller followed in drawing the 2016 Plan,” wrote a federal court panel, “reflected the General Assembly’s intent to discriminate against voters who were likely to support non-Republican candidates.” North Carolina’s congressional maps were more skewed toward Republicans than those of any other swing state, according to an Associated Press analysis. The case is now before the Supreme Court, which heard oral arguments in March and is expected to rule on the validity of the maps by the end of June.

The same thing happened when Hofeller drew districts for the state legislature in North Carolina, with a federal court finding in 2016 that he illegally segregated black voters in majority-minority districts to help white Republicans. The court ordered North Carolina to promptly redraw its districts and hold special elections by 2017 or early 2018.

“The process Dr. Hofeller followed…reflected the General Assembly’s intent to discriminate against voters who were likely to support non-Republican candidates,” a court found.

But North Carolina Republicans said that deadline was impossible. “I have not yet drawn maps nor have I directed that maps be drawn, nor am I aware of any other entity operating in conjunction with the leadership that has drawn maps,” Lewis said at a hearing in August 2017. However, newly discovered evidence released on Thursday—discovered on hard drives now possessed by Hofeller’s estranged daughter, which she turned over to lawyers challenging the legislative maps—showed that Hofeller had drawn 97 percent of new Senate districts and 90 percent of new House districts by June 2017. That suggests that North Carolina Republicans lied about Hofeller’s work to avoid holding special elections, which could have threatened their supermajority in the legislature under more fairly drawn maps. The court also told North Carolina Republicans not to use racial data when drawing new districts, but Hofeller’s drafts included precisely such info, indicating that the legislature sought to maintain its illegal racial gerrymander. Voting rights groups are now challenging the legislative maps in state court, hoping to get new districts drawn before the 2020 election.

The Supreme Court is also considering a lawsuit against gerrymandered maps in Virginia, for which Hofeller likewise provided key advice to Republicans. Democrats alleged that Virginia Republicans pursued a similar strategy as in North Carolina, concentrating black voters into a small number of districts while using the Voting Rights Act as a justification. Hofeller testified in federal court on behalf of the GOP’s state map, saying that it was “compact and compares favorably in terms its level of compactness to other Virginia legislative plans and plans from other states.” The court disagreed, striking down 11 of the state’s legislative districts because “race predominated over traditional districting factors.” The Supreme Court is expected to rule on the case this month.

In addition to the North Carolina and Virginia cases before the court, Hofeller was intimately involved in another one that recently came before the court, and could get taken up again in the near future. In Ohio, Hofeller helped Republicans turn an evenly divided swing state into one where Republicans controlled 12 of 16 congressional districts. Republicans packed Democratic voters in Columbus, the state’s largest city, into one district, which they called the “Franklin County Sinkhole,“ while making two surrounding districts more Republican. When the redistricting coordinator for the National Republican Congressional Committee sent Hofeller the proposed map, Hofeller found that too many Democrats voters had still been placed in an adjoining Republican district. The “downtown” area, he wrote to GOP staffers, was “‘dog meat’ voting territory” that was “awful” for Republicans and should be added to the heavily Democratic district.

A federal court struck down the Ohio map in May 2019, calling it “a remarkably pro-Republican redistricting bill,” and cited Hofeller’s statements as evidence of how “the dominant party in State government manipulated district lines in an attempt to control electoral outcomes.” The Supreme Court blocked that decision in late May, allowing the map to remain in effect for now.