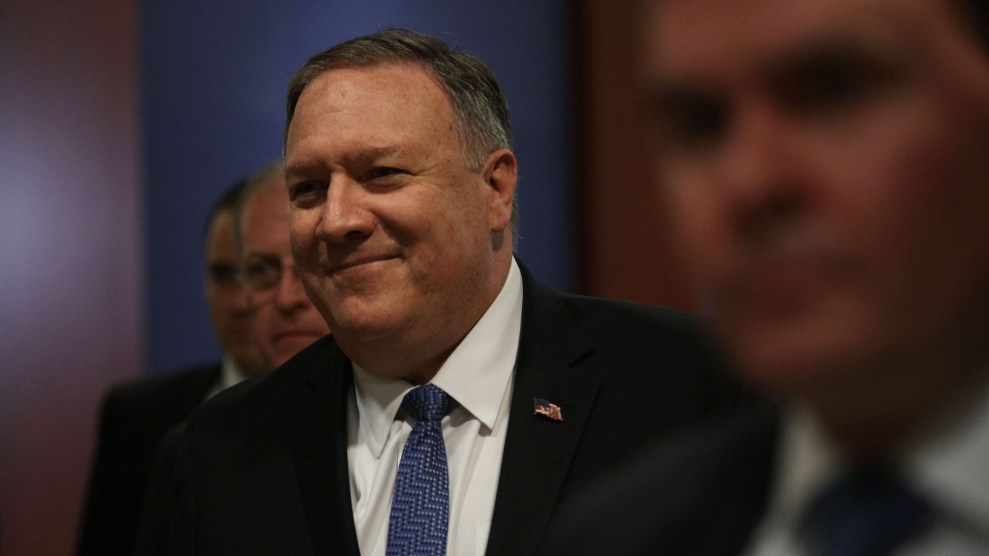 Secretary of State Mike Pompeo arrives at a closed briefing for House members on Iran on May 21, 2019.Alex Wong/Getty Images

House Democrats are investigating the State Department’s use of a program originally set up to counter terrorist disinformation so the Trump administration could fund attacks on critics of the president’s Iran policy.

News broke last week that the Global Engagement Center—a small office in the State Department tasked with combating foreign propaganda—had provided funding to the Iran Disinformation Project, an anonymous website and Twitter account that has been accused of harassing journalists, academics, and human rights activists who question Trump’s aggressive posture toward Iran. On Friday, the State Department announced that it was suspending funding for the project until whoever is behind it “takes necessary steps to ensure that any future activity remains within the agreed scope of work.” According to the Guardian, many of the tweets were deleted that day.

But the controversy has drawn scrutiny from Democrats in Congress. House Foreign Affairs Committee chairman Eliot Engel (D-N.Y.) this week requested that Global Engagement Center officials brief committee staff on the agency’s grant spending, a committee aide told Mother Jones. Officials from the center have agreed to meet with staffers next Monday, the aide said. Rep. Ami Bera (D-Calif.), who chairs a Foreign Affairs Oversight and Investigations Subcommittee, is also looking into the issue, a Bera spokesman said.

Rep. Ilhan Omar (D-Minn.) is also examining ways to press the administration over the center’s activities. “We have both the appropriations process and the State Department authorization coming up, and we are currently looking at ways to hold the administration accountable for these activities,” an Omar spokesman said.

The center’s apparent shift in focus came as the Trump administration escalated its confrontation with Iran. Last year, Trump pulled out of a nuclear deal with Iran signed by former President Barack Obama. Iran and European signatories say they continue to abide by the agreement, but Trump has since slapped new sanctions on Iran and has denounced the country with bellicose rhetoric. Pompeo has demanded that Tehran agree to a long list of demands, including an end to peaceful nuclear power efforts, withdrawal of its forces from Syria, and an end to support for groups including Hezbollah and Hamas.

Brett Bruen, who was director of Global Engagement at the White House under Obama, said that under Pompeo, the repurposing of the agency was clear. “They made a decision to spend the money to align with the political agenda of the administration, rather than what it was intended to do, which was to protect Americans and our allies from disinformation,” Bruen said.

The center was established in 2016 by Obama to “counter the messaging and diminish the influence of international terrorist organizations.” Bruen said the center won $80 million from Congress in 2016 also to combat disinformation from Russia and other states. He argued the Trump administration was uninterested in that mission, slashing funding for the center, before late last year hastily allocating about $20 million for other purposes. “It’s unclear if they were given orders to ignore Russia,” he said. “But they certainly have prioritized Iran.”

The State Department did not respond to questions about the center’s grants. Bruen said he believed the Iran Disinformation Project received a grant worth “tens of thousands” of dollars, a small piece of the millions the center doled out to support hawkish voices on Iran. Its Twitter account, @IranDisinfo, drew notice for attacking Washington Post reporter Jason Rezaian, who spent a year and half in prison in Iran; BBC reporters; Human Rights Watch, and especially the National Iranian American Council, a group that describes itself as a nonpartisan organization of Americans with Iranian heritage who support diplomacy with Iran. The account suggested these critics of current US policy were apologists or secret advocates for the Iranian government.

Jamal Abdi, the president of the NIAC, said in an interview that the account’s attacks were part of a broader “astroturf campaign” by Iran hawks to demonize his group. Abdi said he hopes Congress will determine if “any member of the Trump Administration or U.S. government agency has been involved in guiding, coordinating, or encouraging attacks and propaganda against critics or political opponents of the Trump Administration.”

*This article has been updated with a comment from Rep. Omar’s office.