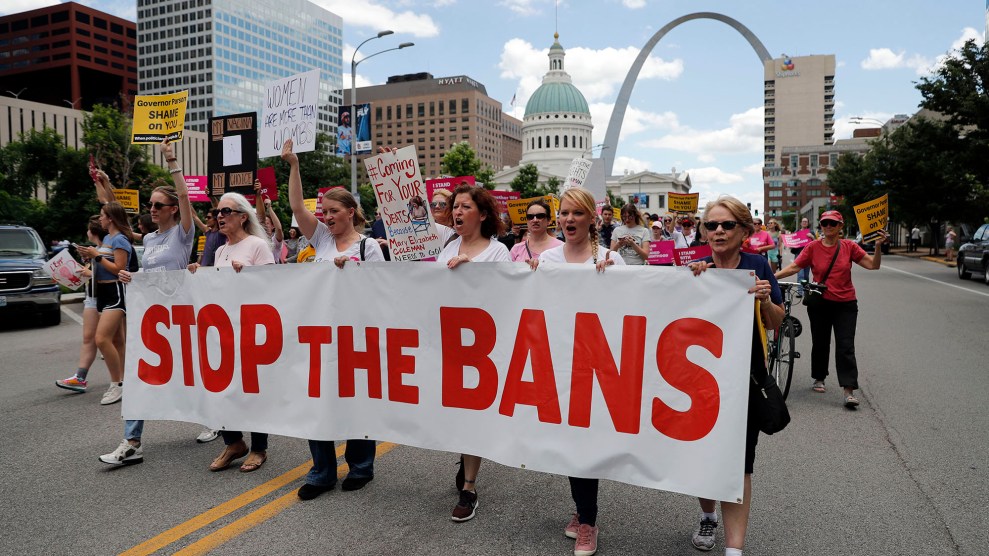 Abortion-rights supporters march Thursday, May 30, 2019, in St. Louis. A St. Louis judge is deciding whether to grant an order that would allow Missouri's only abortion clinic to keep its license to perform abortions past Friday.Jeff Roberson/AP Photo

The fate of Missouri’s last abortion clinic hangs in the balance as a circuit court judge considers the state’s refusal to renew the clinic’s license to provide abortions.

A Planned Parenthood clinic in St. Louis was scheduled to lose its ability to offer abortions last Friday, but a judge stepped in to offer an initial stay against the state’s decision to shut down the clinic’s operations. On Tuesday, the same judge handed Planned Parenthood another major victory, agreeing with the clinic that doctors there who are not employed by Planned Parenthood should not be required to be interviewed by state regulators.

This comes after state regulators demanded to question clinic doctors, most of whom are not employed by Planned Parenthood, over claims that regulators had “ongoing concerns about potential deficient practices.” The clinic ultimately declined to force doctors to sit for interviews, claiming that the questioning was a form of harassment. When the state then moved forward with shutting down the clinic, Planned Parenthood sued, resulting in the circuit court case which will determine whether or not legal abortions can be provided in the state of Missouri.

Dr. Colleen McNicholas, one of the seven doctors at the final remaining clinic in Missouri, is squarely in the middle of this fight. “It’s certainly a stressful time for the patient, and for the providers, to not know every day if this is going to be our last day that we can care for patients,” McNicholas says. She said that the state’s 72 hour waiting period between an initial visit and performing an abortion has left patients in limbo, unsure if the clinic will still be operating when they come back for their second appointment. “We don’t know if we will be able to take care of them.”

Even before regulators moved to close the clinic, McNicholas says, the state had been adding burdensome regulations each year. One major example she gave was pelvic exam requirements. Last year, state legislatures began to require pelvic examinations as a requirement for medication abortions—a noninvasive procedure which normally occurs in the first-trimester. The clinic originally pushed back on this new regulation, but then ultimately decided to stop providing medication abortions all together. However, the following year, regulators claimed that the providers were violating the exact same statute by not giving pelvic exams to patients who required surgical abortions on the day they consented to the abortion, in addition to the day of surgery when pelvic exams are also performed.

“This demonstrates clearly from year to year they are just looking for yet another thing,” McNicholas says. “It ensures that no provider here is able to comply when we don’t know how this will be interpreted.”

“It’s certainly a stressful time for the patient, and for the providers, to not know every day if this is going to be our last day that we can care for patients.”

These types of regulations are not limited to Missouri. These sort of rules exist ostensibly to protect women’s health. However, advocates claim that they serve no medical purpose and are meant to make the burden of operating an abortion clinic too high in order to eliminate them all together. These laws include requirements that abortion providers have admitting privileges at local hospitals, and even regulate the size of hallways in clinics. The existence of these laws help explain why in six states, including Missouri, there is only one abortion provider.

McNicholas argues that these types of laws are more than just cumbersome for doctors and medically unnecessary for patients—they can actually be incredibly traumatizing. The repeated pelvic exams are a prime example. “This has overlaid an emotional sort of trauma both on patients and providers,” says McNicholas. “You don’t need to have a history of trauma to feel how inappropriate it is to subject patients to an invasive exam like pelvic exam when they don’t need it.”

The doctors who work to offer reproductive care also face risks. In 2015, a shooting of a Planned Parenthood in Colorado left three people dead and several others injured. Rather than hide, McNicholas has decided to be outspoken on behalf of herself and her patients.

“I have chosen a path to be very out about the work that I do because I think that for me it’s an intentional strategy to take away an opportunity for extremists to feel like they have something to out me about,” she explains.

McNicholas, who has a son, admits she sometimes feels scared for her family, but still believes that she is making the right decision to continue to fight for her patients. “I think for me, and for all of those people, we are so committed to the work, and we know so strongly that we are on the right side at that at this moment, the risk still feels worth the sacrifices,” she said.

“In those three minutes [of performing an abortion] I was able to give this person their life back and now they get to be a 12-year-old again, or they get to go back to finish their college education, a feat that maybe nobody in their family has had yet,” said McNicholas. “That’s why I am able to do this sort of work, why I am able to continue to do it in a really challenging state, in a really challenging time.”

If the clinic closes, McNicholas is not optimistic that all Missourians will still be able to receive the full spectrum of reproductive care. “Missourians are going to have to figure out a way to travel across the state lines,” she says. “Some will be able to do that, some will choose self-managed abortions, and some will be forced to continue their pregnancy.”