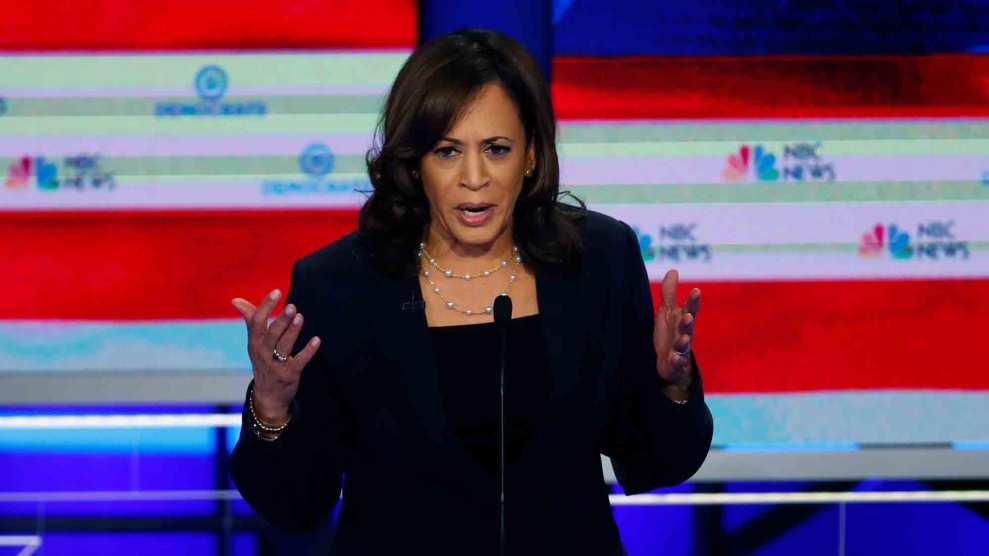 For the eventual Democratic presidential nominee, the right stuff for victory can be boiled down rather easily: the ability to campaign against a skunk.

Let me back up. My father used to say, “Never get in a fight with a skunk. You both end up smelling bad, but the skunk likes that.” By now you have figured out who plays the role of the skunk in this folksy analogy: Donald Trump. Even with historically low approval ratings, Trump is a tough target. His say-anything-do-anything demagogic, fear-mongering style of politics is designed to pull his foes into the gutter with him. And since he’s already wallowing there—a creepy brute, a hate-fueling bigot, and an inveterate liar accused of rape—he has nothing to lose in a mud-bath clash.

But whoever he drags into the dirt could see his or her shine diminish. So the Democratic candidate who ends up on the fight card with Trump will have to be damn smart and wily in devising a combat strategy. On Thursday night, Sen. Kamala Harris demonstrated—more than any of the 19 other contenders who vied for viral moments throughout the two Democratic debates—that she and her crew know how to craft and execute a battle plan aimed directly at an opponent’s vulnerability. That doesn’t yet mean she will be the best to take on Trump. But in that all-important doing-what-it-takes lane, she is now leading the pack.

During the debates, many of the Democratic candidates tried mightily to grab a breakout 30 seconds that would boost their standing and juice their campaigns. Some tried it with sharp, issue-oriented jabs or what they hoped would be regarded as clever soundbites. Former Housing Secretary Julián Castro poked at ex-Rep. Beto O’Rourke over an immigration issue. Rep. Eric Swalwell, addressing former veep Joe Biden, declared it was time for a new generation (Swalwell’s, that is) to take the torch. But Harris topped them all and illustrated that she could engineer and implement a well-thought-out assault on a political foe.

When the conversation during the second debate turned to police shootings of African American men, Harris elbowed into the discussion, saying, “As the only black person on this stage, I would like to speak on the issue of race.” She then let loose a volley that was pre-planned. She referred to her own experiences with racism as a young child and struck Biden with a two-pronged attack. First, she politely but firmly slammed him for his recent comments about the good ol’ days when he could forge legislative compromises with segregationist senators. “I do not believe you are a racist,” Harris said in a heartfelt manner, “and I agree with you when you commit yourself to the importance of finding common ground. But I also believe, and it’s personal and it was actually—it was hurtful, to hear you talk about the reputations of two United States senators who built their reputations and career on segregation of race in this country.”

That was merely the set-up. She quickly moved to the coup de grâce. Noting Biden’s efforts in the 1970s to oppose busing ordered by the federal government to desegregate public schools, she said, “There was a little girl in California, who was part of the second class to integrate her public school. And she was bused to school every day. And that little girl was me.”

Biden stepped into the trap. He told Harris she was wrong: “In terms of busing, you would have been able to go to school in the same exact way because it was a local decision made by your city council. That’s fine. That’s one of the things I argued for, that we should be breaking down these lines.” Harris did not let up. She asked Biden, “Do you agree today that you were wrong to oppose busing in America then?” He responded, “I did not oppose busing in America. What I opposed was busing ordered by the Department of Education, that’s what I opposed.”

The former vice president was flopping about, making a case that sounded similar to the states’ rights arguments used by the anti-desegregationists of that era. And Harris shot back, “That’s where the federal government must step in! That’s why we have the Civil Rights Act and the Voting Rights Act. That’s why we need to pass the Equality Act. That’s why we need to pass the ERA [Equal Rights Amendment]. Because there are moments in history when states fail to preserve the civil rights of all people.” Biden surrendered with a weak, “My time’s up.”

Harris’ run on Biden was not improvised. This was rehearsed and readied. As soon as it happened—and the audience applause signaled its success—her campaign zapped out a brief four-sentence fundraising email: “Are you watching Kamala on the debate stage right now? She’s fired up—and so are we.” And her Facebook page posted a photo of her as a child with the tagline echoing what she had just told Biden: “That Little Girl Was Me.”

It was all too obvious. Harris and her advisers had decided to hit Biden and then, if it worked, exploit the moment. But it was up to Harris to find an opportunity during the debate to trigger the plan. And she did so smoothly. It worked. Biden, the frontrunner, faltered, and for this exchange and other aspects of her performance throughout the debate, Harris was rightfully pronounced the winner by the politerati. At the first debate the previous night, Sen. Elizabeth Warren seemed to have gained the most. She did so by clearly presenting her message of progressive kitchen-table populism. Warren, the former professor, evinced her ability to deploy her command of policy details to do fierce political battle. Harris, the former prosecutor, displayed a different skill: how to personally (and fairly) attack and eviscerate an opponent.

Trump is an unpopular president. But he will be a vexing foe. His talents are those of a clever bully. He belittles. He mocks. He casts false aspersions. He uses a dog whistle and a bullhorn to whip up anger and resentment. He lies about, well, everything. With his bad conduct, he distracts from serious discourse and attempts to set the terms of the fight. He is the master of defining down. He is a whirl of misbehavior who constantly hits (and grabs) below the belt. He is tethered to no rules, no values, and no sense of decency. And his mud-throwing machine will be underwritten with hundreds of millions of dollars in campaign cash. Taking him on will be no easy mission. The Democratic candidate will have to deflect or sidestep Trump’s blitz of bullshit—know when to respond, when to counter, when to ignore—and craft his or her own scheme for fighting back. I referred to Trump as a skunk above, but how do you wrestle a slippery pig in the muck without getting as muddy as the swine?

No Democratic candidate has yet proven that he or she has completely figured out this puzzle. On Thursday evening, Harris showed Democratic voters that she can conceive and implement a kick-ass plan. Certainly, one Biden blast does not a winning campaign make (and Biden is a much different target than Trump). Yet it was a signal that Harris has the capacity to mount a strategic strike. In these debates—and there are plenty more to come—she was the best brawler of all the contestants, and for the main event, her party is going to need one hell of a warrior.