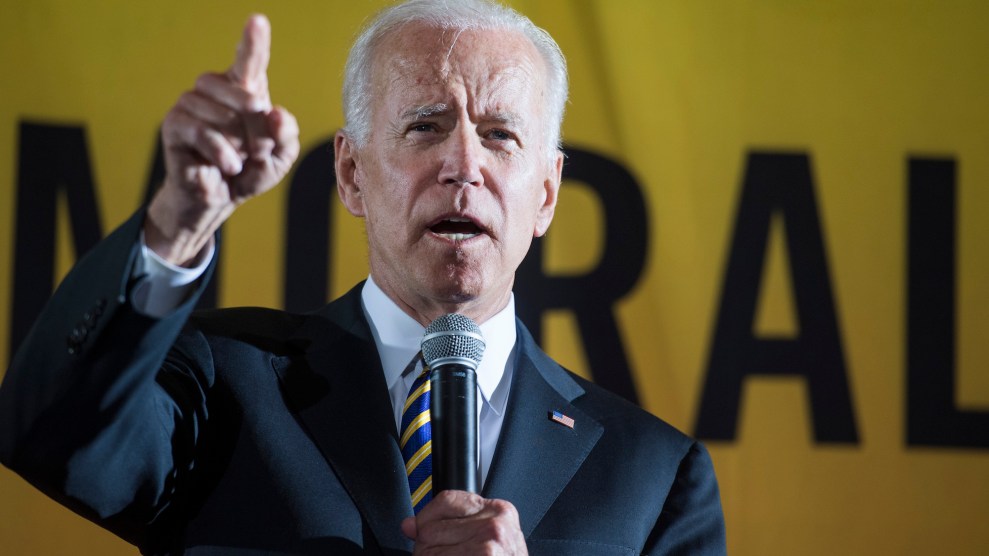 At a Planned Parenthood candidate forum featuring most of the 2020 Democratic candidates on Saturday, former Vice President Joe Biden was adamant that he’s never waffled as a strong supporter of abortion rights. “I’m not sure about the mixed record part,” Biden said after Kelley Robinson, the executive director of Planned Parenthood’s political arm, noted that some voters might be concerned about Biden’s past ambivalence on matters of sexual and reproductive health.

Recent events prove why some people might have those questions about Biden. Earlier this month, the former vice president reversed his support for the Hyde Amendment, a law that prohibits federal funding for most abortions, after an earlier affirmation of continued support for it on the campaign trail drew sharp criticism from Democratic voters as strict abortion laws hit the books in Alabama, Louisiana, and Georgia over the last several weeks.

And his record in the Senate tells a different story. As Mother Jones‘ Patrick Caldwell reported in 2015, Biden was an “unreliable ally” of abortion rights activists during his first decades in national politics. Back in 1986, a Planned Parenthood official said of then-senator, “Joe Biden moans a lot and then usually votes against us.”

Biden was willing to stand alongside politicians who wanted to make abortion illegal. In a Washingtonian profile published the year after the Supreme Court’s 1973 Roe v. Wade decision established a nationwide right to abortion, Biden unequivocally criticized the ruling. “I don’t like the Supreme Court decision on abortion,” he said. “I think it went too far. I don’t think that a woman has the sole right to say what should happen to her body.”

He put that view into practice in 1982, voting in the Judiciary Committee for a proposed constitutional amendment that would have overturned Roe v. Wade by declaring that the Constitution offered women no inherent right to abortion, and that the federal government and states would be free to regulate or ban abortion as they pleased. Under that amendment, state laws that restricted abortions would have superseded more permissive federal laws.

Biden became a more dependable defender of the reproductive rights when he assumed the chairmanship of the Senate Judiciary Committee in 1987:

In his role as chair of the Senate Judiciary Committee, Biden pointedly questioned conservative Supreme Court nominee Robert Bork’s opposition to the majority decision on Griswald v. Conneticut, a ruling that struck down bans on birth control. Biden has since regularly boasted of his efforts to derail Bork. “Had he been on the court,” Biden said in his 2008 vice presidential debate with Sarah Palin, “I suspect there would be a lot of changes that I don’t like and the American people wouldn’t like, including everything from Roe v. Wade to issues relating to civil rights and civil liberties.”

Biden defended the constitutional right to an abortion during his presidential run in 2008. “I strongly support Roe v. Wade,” Biden said during a 2007 debate, when asked if he’d have an abortion litmus test for Supreme Court nominees. “I wouldn’t have a specific question, but I’d make sure that the people I sent to be nominated to the Supreme Court shared my values and understood that there is a right to privacy in the United States Constitution.”

Central to his vacillation on the matter has been Biden’s personal religious views. The former vice president is a devout Catholic who accepts the church’s position that life begins at conception, but he’s maintained that doesn’t have bearing on the decisions he makes as a politicians. “I accept it in my personal life, but I refuse to impose it on equally devout Christians and Muslims and Jews,” he said in the 2012 vice presidential debate against Paul Ryan. But, as Caldwell reported, Biden occasionally earned dismal marks from abortion rights groups over his Senate votes to uphold the Hyde Amendment and ban partial-birth abortions:

His disagreements with those groups largely centered on two measures: partial-birth abortions and federal funding. Throughout his time in the Senate, Biden regularly supported the so-called Hyde Amendment, which prohibits federal funds from being directed to abortions. “Those of us who are opposed to abortion should not be compelled to pay for them,” Biden wrote in 1994. He also regularly sided with abortion opponents in the 1990s and early 2000s on bans on partial-birth abortion, or medically intact dilation and extraction. Biden approved final passage of the ban on these late-term abortions when it became a law in 2003.

Since his reversal on the Hyde Amendment earlier this month, Biden has treated that record as ancient history. Before the Planned Parenthood audience in Columbia, South Carolina, Biden affirmed that, as president, he would back measures to extend health care access so that all women are insured, codify Roe vs. Wade into law, and ensure women are not charged more than men are for insurance and the treatment they require for reproductive health services.