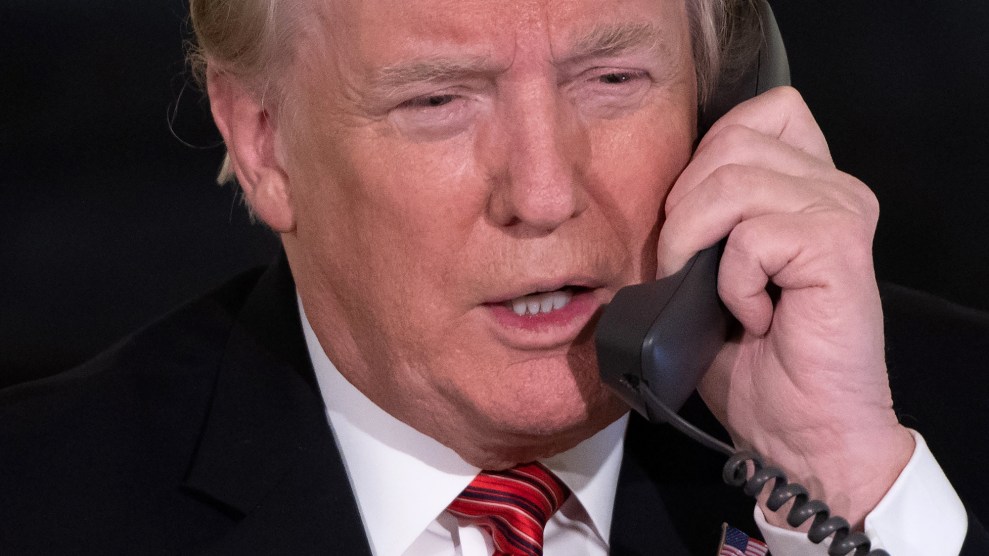 With one phone call in April, President Donald Trump undercut years of American diplomacy in Libya, leaving US policy toward the war-torn state uncertain. Now a colorful cast of lobbyists and would-be profiteers are cashing in on the confusion, as they sign up with assorted Libyan factions—which are backed by competing foreign countries—to help them influence policymakers in Washington. In short, Trump threw US policy toward Libya into chaos and created a money-making opportunity for K Street.

“It’s kind of a crazy scenario,” says one lobbyist involved in the fracas.

The US-led intervention in Libya’s 2011 civil war and the killing that year of Libyan dictator Moammar Qaddafi left the country divided between often-warring militias, some with alleged ties to terror groups. Ever since, US policy has focused on encouraging a peaceful political process in the country and on pushing Haftar, a dual American-Libyan citizen with reputed CIA links, to accept a power-sharing arrangement. The former US chargé d’affaires in Libya, Peter Bodde, had repeatedly warned Haftar against attacking Tripoli. But in early April, he launched an offensive that reached the outskirts of the capital. Days before Trump’s call, Secretary of State Mike Pompeo had emphasized US opposition to Haftar’s offensive. Trump’s reported green light to Haftar upended these US efforts to rein in Haftar. (Bodde criticized Haftar’s offensive in a letter released when he left his post on May 23.)

The resulting confusion over US policy in Libya provided K Street with an opening. On April 22, the government of Prime Minister Fayez al-Sarraj inked a contract to pay Mercury Public Affairs, a Republican-leaning firm, $500,000 up front and $150,000 a month to lobby the Trump administration and Congress on its behalf. The firm has more than a dozen staffers working on the account, including former Sen. David Vitter, a Louisiana Republican, and Bryan Lanza, a former Trump campaign and transition official.

Mercury immediately began reaching out to Capitol Hill lawmakers to boost support for the Tripoli government and stop legislators from backing Trump’s apparent reversal of policy. Sources familiar with this lobbying effort say it had helped generate congressional criticism of Trump’s move, but lawmakers who did assail Trump’s call to Haftar insist their actions were not prompted by Mercury’s activity.

In May, Mercury lobbyists contacted Rep. Ted Deutch, (D-Fla.), who chairs a House Foreign Affairs subcommittee on the Middle East and North Africa, according to sources with knowledge of the lobbying campaign. Deutch later chaired a May 15 hearing where witnesses and members asserted that Trump’s embrace of Haftar had caused greater instability in an already unstable Libya. A congressional aide said the hearing was planned before Mercury’s lobbying. And former Rep. Joe Garcia, a Florida Democrat who works for Mercury, contacted members of the Senate Foreign Relations Committee to push them to denounce Haftar’s assault. Last Wednesday, Senators Robert Menendez (D-N.J.), Chris Murphy (D-Conn.), Lindsey Graham (R-S.C.), and John Barrasso (R-Wyo.) sent a letter urging Trump to back a ceasefire in Libya. “As with most complex geopolitical crises, there is no military solution to the ongoing instability in Libya,” the senators said. A spokesperson for Menendez, whose office drafted the letter, did not respond to questions about Mercury’s role in the matter.

“As with most complex geopolitical crises, there is no military solution to the ongoing instability in Libya.”

Libya’s deputy prime minister, Ahmed Maiteeq, meanwhile, has secured his own help in Washington. The Prime Policy Group, led by Charlie Black, registered with the Justice Department on May 2 to represent Maiteeq. The group said in the filing that it is working pro bono.

Black is best known for having partnered in the 1980s and 1990s with Paul Manafort, the imprisoned former Trump campaign chairperson, and Roger Stone, the longtime Trump adviser facing perjury and obstruction of justice charges, in a famed lobbying and political consulting firm. The firm drew notoriety for representing autocratic foreign leaders such as Ferdinand Marcos of the Philippines, Mobutu Sese Seko of what is now Congo, and Jonas Savimbi of Angola.

Black tells Mother Jones that he met Maiteeq in April in Vienna and was impressed with his pro-Western views and background as a businessman. Maiteeq could be Libya’s next leader, Black says. “He struck me as someone we ought to get around in the US,” Black says. “I thought he ought to get over here and meet people.” According to Black, Maiteeq is visiting Washington this week to meet with congressional and administration officials. Black would not disclose ahead of time with whom Maiteeq would be meeting. The longtime lobbyist says he believes that the upshot of Trump’s call to Haftar remains uncertain. But, Black said, the resulting confusion over US policy has made his effort to help Maiteeq win audiences with US policymakers “more urgent.”

After these Libyan officials recruited Washington lobbyists, Haftar did the same. On May 16, Haftar’s Libyan National Army retained Linden Government Solutions, a Houston-based firm, to provide “strategic consulting services, advice [and] planning” for Haftar. The 13-month deal will pay the firm $2 million.

Stephen Payne, Linden’s president, who did foreign travel advance work and fundraising for former President George W. Bush, has since worked as a lobbyist for foreign governments with oil and gas interests, including Turkmenistan, Pakistan, and Azerbaijan. Haftar has pitched his offensive as a means to stabilize Libya’s oil industry, and the White House cited that goal in a readout of Trump’s phone call to him. In 2008, Payne drew scrutiny from Democrats on the House Oversight Committee after the Sunday Times published a video in which Payne, believing he was meeting with a representative of a former president of Kyrgyzstan, appeared to suggest a large contribution to the future George W. Bush Presidential Library could help secure access to senior US officials. Payne said he did nothing wrong and insisted the video was misleadingly edited.

Payne has longstanding ties to Libya and says that in 2011 he helped negotiate the release from Libya of three journalists, including James Foley, who was later murdered by ISIS in Syria.

In a statement, Payne maintained that Haftar can stabilize the country and defeat terror groups there. He told Mother Jones that he has “known of Haftar’s work since about 2014” and credits Haftar with eliminating terrorist cells in eastern Libya. “I knew we were on the right side of history,” Payne remarked.

Haftar also has other advocates. Since 2015, Ari Ben-Menashe, a Montreal-based, Iranian-born Israeli security consultant, and alleged former arms dealer, has been registered with the Justice Department’s Foreign Agents Registration Act (FARA) unit as a lobbyist for Haftar and Libya’s House of Representatives, a legislative body aligned with Haftar and operating separately from the Tripoli government. Ben-Menashe, who says he is a former Israeli intelligence agent, has claimed to be involved in varied international intrigues since the 1980s and has been repeatedly accused of exaggerating his role. In the early 1990s, he said he knew of a Reagan campaign plot to delay the release of US hostages in Iran until after the 1980 presidential election. But a congressional task force that investigated the matter later called Ben-Menashe’s claims “a total fabrication.”

In an interview, Ben-Menashe said he continues to work for Haftar and his allies overseas. Ben-Menashe said he has spoken twice in recent weeks to Prime Minister al-Sarraj, Haftar’s rival, as part of an attempt to end hostilities. “There has to be some sort of leader to unite Libya,” Ben-Menashe said, adding that Saif Qaddafi, one of Qaddafi’s surviving sons, could become that unifying figure.

Lobbyist reports filed with FARA tend to be routine and bland. But Ben-Menashe’s filings contain striking claims. A November 2015 contract that Ben-Menashe submitted says his firm, Dickens & Madson, would help Haftar secure $500 million worth of “security equipment” and “technical support” from Russia. The one-year contract paid the firm $6 million. Ben-Menashe said he obtained “quite a bit” of that Russian aid for Haftar. He takes credit for a ceremonial visit in early 2017 by Haftar to a Russian aircraft carrier off Libya’s coast. (The carrier’s visit, according to special counsel Robert Mueller’s report, was a topic of discussion during a private 2017 meeting in the Seychelles between former Blackwater chief Erik Prince and an emissary of Russian President Vladimir Putin.) Since the Russian carrier visited Libya, Haftar’s rivals and media reports have suggested that Moscow is assisting his forces.

Ben-Menashe also has suggested he was lobbying foreign players to sway US policymakers on Haftar’s behalf. In one submission, he declared he was “engaged in activities outside of the United States including meetings with individuals who might in turn have some influence with respect to the position of the United States regarding the establishment of governing structures in Libya.” He did not elaborate on those activities in the filing.

There is good reason to regard Ben-Menashe’s assertions skeptically. But it is not just lobbying firms that are working to shape Trump’s policy in Libya. The Wall Street Journal reported in May that Trump’s decision to reverse US policy and embrace Haftar was the result of lobbying by Saudi Crown Prince Mohammed bin Salman and Egyptian President Abdel Fattah Al Sisi. Those autocratic leaders—along the United Arab Emirates, Russia, and France—have supported Haftar. On the other side, Qatar and Turkey have reportedly helped arm militias supporting the Tripoli government.

In recent years, the various conflicts in the Arab world—the cold war between Qatar and the Saudis and the Emiratis, and the war in Yemen, which pits Saudi proxies against Iranian proxies—have played out in Washington, where the different sides in these faceoffs have rushed to retain high-paid lobbyists to influence the Trump administration.

Now it’s the Libyan civil war that is generating a spree to sign up the influence peddlers of K Street. It seems that Trump’s foreign policy—or, in this case, the lack thereof—has been very good for the hired-gun lobbyists of Washington.