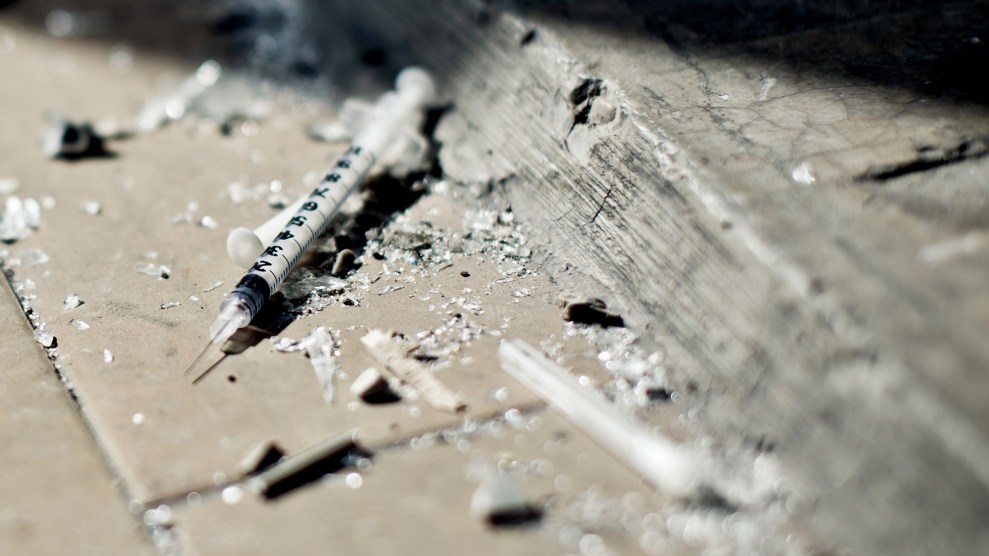 HIV cases are surging in Huntington, West Virginia, a city already ravaged by the opioid epidemic. Experts worry that the virus could proliferate farther still—particularly since Charleston, the state capital an hour away, shut down its syringe exchange last year. The move restricted access not only to clean needles but to HIV testing as well.

“It’s the looming disaster that we were all afraid of,” says Dr. Judith Feinberg, a professor at West Virginia University School of Medicine. “It’s hard enough to deal with the disease of addiction. And now they have HIV on top of it. It didn’t have to be that way.”

Since the beginning of 2018, 55 new cases of HIV have been reported in Cabell County, which includes Huntington, according to state health officials. Nearly all of the infections were transmitted through injection drug use. Previously, the county averaged eight cases a year.

Though HIV rates have been historically low in West Virginia, public health experts have long warned that the soaring drug use and relatively few HIV surveillance resources in many Appalachian counties could prove a lethal combination. After the 2015 HIV outbreak in Scott County, Indiana, the Centers for Disease Control and Prevention identified the counties at the highest risk of future outbreaks based on the prevalence of drug overdoses, insurance coverage, health facilities, and a number of other indicators. Half the counties in West Virginia made the list.

Since identifying the HIV cluster, Huntington’s health authorities have gone into overdrive, aided by a CDC response team working from West Virginia. “We’ve got basically everybody in the community trying to identify cases and link [patients] to care,” said Dr. Michael Kilkenny, who heads Cabell-Huntington Health Department. That’s no small task in a county that’s home to an estimated 1,900 active IV drug users. In April, the county health department began prescribing pre-exposure prophylaxis (PrEP) for those at risk of contracting the virus. In May, the county administered 166 HIV tests at the health department—more than double May of 2018.

Key to Huntington’s response is the county needle exchange, where active drug users, many of whom are homeless, can exchange used syringes for clean ones and be tested a host of diseases, including HIV and viral hepatitis. “It may be one of the few places where people who inject drugs can be treated with respect and feel that they can discuss their drug concerns and get services like screenings,” said Kilkenny.

HIV in rural areas tends to spread in clusters: groups of drug users sharing needles are isolated from the disease until one member contracts HIV, at which point the cases quickly balloon. There are a number contenders for the next cluster: Cabell County sits in the middle of a patch of counties in Ohio, Kentucky, and West Virginia that made the CDC’s list of vulnerable places.

But perhaps the most obvious possibility is Charleston, West Virginia’s capital, an hour away from Huntington.

Unlike Huntington, Charleston doesn’t have a large, county-run needle exchange: Its program, the biggest in the state, was suspended indefinitely in March of 2018 after a highly publicized and political conflict. Critics of the program said it enabled drug use and littered the streets with needles. Proponents said the exchange, which served more than 400 patients each week, saved lives in a city where an estimated three to four percent of the population uses IV drugs. (Indeed, decades of research have found that needle exchanges reduce the spread of disease and save money. A CDC spokesman called needle exchanges “key to delivering health services to people who inject drugs, including HIV and hepatitis C testing.”)

After the program was shut down, public health experts warned that infectious disease would flourish—and Charleston’s residents wouldn’t know it until it was too late. The city is at “grave risk for an HIV outbreak just like the one in Scott County,” former Kanawha-Charleston Health Department director Dr. Michael Brumage told the New York Times just after the closure.

“One needle will probably do 15 people.”

A recently-published study seemed to confirm Brumage’s fears. A team of John Hopkins University researchers interviewed dozens of Charleston’s active injection drug users in the wake of the harm reduction program’s shuttering and found that the closure “fundamentally changed the public health landscape… ushering in a new era of increased risks for acquiring bloodborne infections and overdose.” Participants reported not wanting to share needles for fear of HIV and viral hepatitis, but few could avoid doing so. One participant described needle-sharing as an “epidemic.” He went on, “I mean, you’ve got four or five people sharing a needle, and then they’ll throw it down on the ground and maybe somebody else come along and they pick it up…One needle will probably do 15 people.”

Dr. Arthur Rubin, who leads the Kanawha-Charleston Health Board, told Mother Jones that HIV doesn’t appear to be a problem in Charleston like it is in Huntington. But Charleston isn’t testing nearly as many users as Huntington. So far this year, the Kanawha-Charleston Health Department has administered 173 tests at its clinic—just a few more than Cabell-Huntington Health Department did in May alone. That number doesn’t include testing from local Charleston charities serving the homeless, many of which have stepped up surveillance in response to the nearby cluster. “We feel very fortunate so far that we have not identified a cluster and we’ll continue to be diligent,” Rubin said.

Charleston is far from the only place to rebuke needle exchanges in the midst of a drug epidemic. Last month, commissioners in Logan County, an hour south of Charleston, voted to ban needle exchanges altogether. “We feel like Davy Crocket and Daniel Boone,” said county commissioner Danny Godby of the decision. “We’re going into untouched territory, but you know you have follow your heart in this situation.” Earlier this month, a Cabell County commissioner called for an audit of Huntington’s needle exchange—the one that has been a hub of HIV testing—suggesting that it could be fueling the disease. As she told the Charleston Gazette Mail, “Since the Logan County Commission made that action to prohibit the needle exchange in their county, I’ve been getting a lot of contacts from people here saying, ‘Why not Cabell County?’”

Meanwhile, Brumage believes it’s only a matter of time before HIV arrives in Charleston. Last year, he told the New York Times that without the needle exchange, Charleston was “sitting on a powder keg.” Recently, he told Mother Jones that the statement still holds true: “But this year, the fuse is lit.”