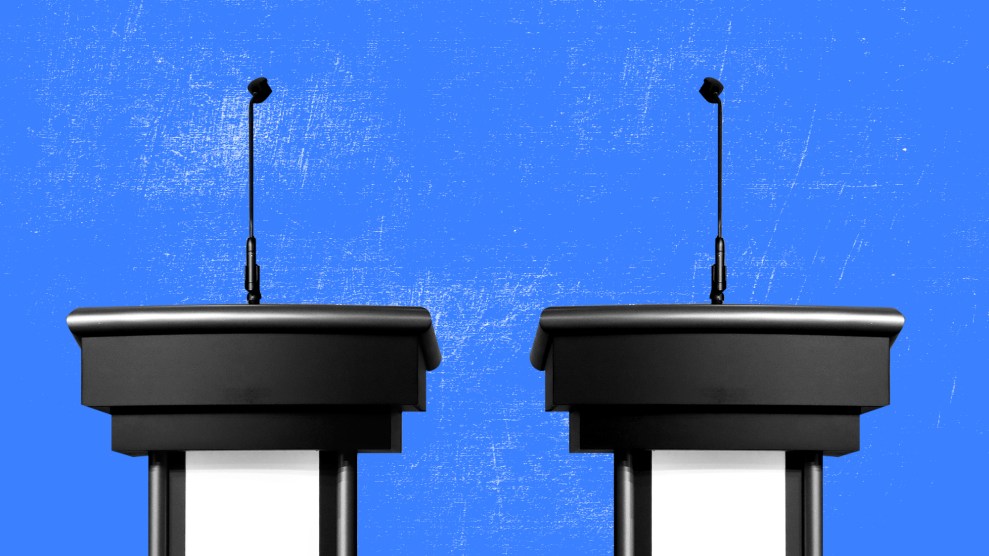 It’s finally happening. On Wednesday, 10 Democratic candidates will take the stage in Miami for the first debate of the 2020 presidential campaign. On Thursday, 10 different Democrats will do it again. Sure, it will be entertaining. But do debates actually matter?

Debates “can lose you the campaign if you mess up too badly.”

According to University of Alabama–Birmingham political scientist William Benoit, who has spent years studying the effects of candidate debates, the answer is yes.

“Lots of things in the campaign have effects on the voters, and they accumulate over time,” Benoit says. “There are personal [campaign] appearances, and probably more important than that, there’s media coverage of personal appearances. There are TV spots. There are surrogates speaking. So it’s hard to say that one element, like a debate, is vital or can guarantee a win, because there are so many messages going around. Debates are useful for voters. They can help candidates. They can’t guarantee a win, but I think they can lose you the campaign if you mess up too badly.”

The idea that a debate can really hurt a candidate is fairly intuitive—in extreme cases, it’s like a nationally televised implosion. The example Benoit uses is that of Rick Perry, the former Texas governor and current energy secretary who in 2011 spent 50 seconds trying to remember the three cabinet agencies he was promising to eliminate. Here, let’s relive it:

The extent to which debates can help a candidate is a bit more muddled because it’s complicated by factors such as how many candidates are running and when the debate is held. Benoit’s research has found that debates have tangible effects on voters’ candidate preference and that those effects are more pronounced during primaries than in general elections.

“But keep in mind that especially in the primary, voters might not watch the early debates. They might wait for the debate that’s going to happen in their state,” he adds. “For those voters, it sort of is…the first debate, even if it’s the third or fourth in the season.”

At the same time, the bounce a candidate receives from a very strong debate may not be permanent, which is why it’s sometimes tempting to dismiss the overall importance. The most famous example of a successful debate showing is probably that of then-Sen. John F. Kennedy during the general election in 1960, in what was America’s first televised presidential debate. Kennedy shined, and his opponent, Richard Nixon, flopped. But it happened long enough before Election Day that Nixon was able to slowly make up ground, ultimately losing by one of the narrowest popular-vote margins ever.

“It’s not like everyone shifts back and forth,” Benoit says. “But still, enough people shift that it makes a difference. If nothing dramatic happens…after a debate, the effects may persist longer. If something dramatic happens, [the impact of the debate] may be damped down quicker. But no matter whether it damps down or not, you would rather have a 3- or 5-percent bump a month out than not have a 3- or 5-percent bump.”

“What debates do is put some issues more in the foreground.”

Various factors in 2019 will complicate the debate equation. Because the field is so large, candidates will have less time to talk than they would in other races or other years. And because the early debates are split into two groups, voters might not be able to make the head-to-head comparisons to form a decision.

But there’s another consequence of debates that has nothing to do with candidates: Debates have the power to shape which issues voters care about.

“There’s a mass communication theory about agenda-setting that was started about news coverage, and got extended to debates,” Benoit says. “And what they found was, the more the news talks about a given topic—like energy, or immigration, or inflation—the more important the voters think it is…There are lots of topics, and voters can’t care equally about all of them…What debates do is put some issues more in the foreground.”

For instance, while debate moderators have routinely asked presidential candidates about the national debt, they often ignored two issues that are at the center of many Democratic campaigns: affordable housing and climate change. So when activist groups like the Sunrise Movement push for a debate focused solely on a single issue, it’s not just because there is a serious intra-party fight that’s worth litigating; it’s because merely talking about the issue raises its profile.

So grab some vegan cupcakes and tune in. But no pressure—after this week’s festivities, there will be at least six more of them before the first votes are cast.