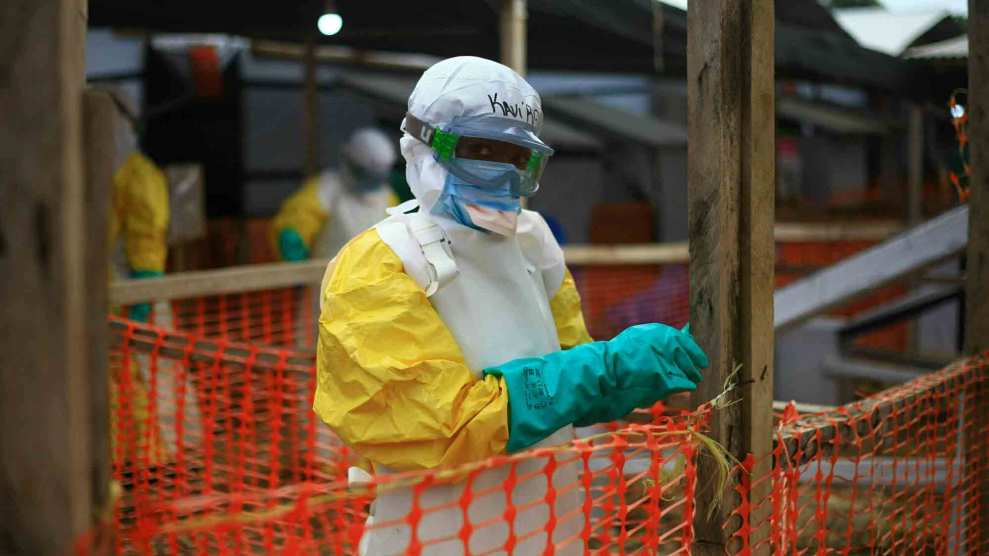 Near-war with Iran, children being held at the US-Mexico border in horrific conditions, a credible rape accusation levied at Donald Trump—the news has been overwhelming in recent days. But there is another nightmare brewing that has been largely overlooked yet deserves serious attention and fast action: Ebola. The killer disease is again on the rampage in Africa. The number of confirmed Ebola deaths over the past 10 months in the eastern region of Congo has topped 1,500, and the outbreak has spread into Uganda, which earlier this month reported the country’s first Ebola deaths of this epidemic. This is a far cry from the 11,300 deaths that occurred in 2014 and 2015, but the current eruption is the second-worst flare-up, and it’s heading from rural areas toward a major city and refugee camps. So what is President Donald Trump doing about this? Not much. And that’s especially unfortunate because there are several obvious actions his administration could mount to arrest this epidemic before the ongoing tragedy becomes a catastrophe.

Trump and his national security adviser, John Bolton, a year ago signaled they didn’t consider epidemics a national security priority when they bounced Rear Admiral Tim Ziemer from his post as head of global health security on the White House’s National Security Council and eliminated the position. This news was announced one day after the World Health Organization declared an Ebola outbreak in Congo. The well-regarded Ziemer moved over to the US Agency for International Development, becoming an assistant administrator overseeing humanitarian assistance, but as Ronald Klain, the Ebola czar for President Barack Obama during the 2014-15 episode, notes, it is essential that a senior official in the Trump administration with full White House authority coordinate the various agencies involved—the State Department, USAID, the Centers for Disease Control, the Pentagon, and others—to have an effective response. Now no one holds such a position.

Three months ago, Klain wrote an op-ed lamenting that “most Americans seem unaware or unconcerned” about the second-worst outbreak of Ebola. Klain is a veteran of Democratic administrations and no fan of Trump—who in 2014 complained that Obama was spending more time on climate change than Ebola and demanded that the US government block Ebola-infected health workers from entering the United States—but Klain acknowledged “that much of [the Trump administration’s] Ebola response so far has been responsible.” At that point, key US officials had visited the region, and the administration had contributed millions of dollars to the response and announced it would be sending a team of experts to Congo, although only to a location 200 miles from the center of the epidemic. Now Klain tells Mother Jones he believes that Trump is no longer responding responsibly and that the president is not doing what is necessary to battle this Ebola outburst.

Klain maintains that the Trump White House ought to reverse its decision prohibiting the CDC and USAID from operating in the area of Congo where the disease is raging: “We have people in Congo—not many—but even those people have been banned from being on the front lines. It’s not without some rationale; it’s dangerous: armed groups roam, and the risk of kidnapping is real.” In fact, in the city of Beni, a group of people days ago attacked an Ebola response team that was trying to safely dispose of the bodies of two Ebola victims. But Klain points out that since the 2017 ambush in Niger that killed four American soldiers, “the basic Trump administration rule has been zero risk to US personnel. Hence, the very best disease responders in the world (US CDC personnel) and the very best development assistance teams (USAID Disaster Assistance Response Teams) are in Congo but not near where they are needed. These people want to go into the danger zone, but they are being stopped by a White House decision.”

Then there is the question of money. Last week, the World Health Organization said that it needs $98 million to support its counter-Ebola efforts in Congo. And it only has $44 million for the mission. “The funding shortfall is immediate and critical: if the funds are not received, WHO will be unable to sustain the response at the current scale,” the group stated, noting, “The response risks being driven by decisions related to financial capacity rather than operational needs.” Meanwhile, health workers in Uganda are saying they are ill-equipped to handle a spread of the epidemic to their country. The Associated Press recently described a grim scene in Bwera, Uganda, which is on the border of Congo: “The isolation ward for Ebola patients is a tent erected in the garden of the local hospital. Gloves are given out sparingly to health workers. And when the second person in this Uganda border town died after the virus outbreak spread from neighboring Congo, the hospital for several hours couldn’t find a vehicle to take away the body. ‘We don’t really have an isolation ward,’ the Bwera Hospital’s administrator, Pedson Buthalha, told The Associated Press. ‘It’s just a tent. To be honest, we can’t accommodate more than five people.’”

If the Trump administration is not going to allow American response teams into the hot-spot areas, it could send more money and supplies to the WHO and other responders. Hell, if Trump is worth as much as he claims, he could cut a check himself to cover the WHO’s current need. (Trump’s golf trips have cost the American taxpayer more than $100 million—about twice what the WHO requires—in security and travel and security expenses.)

Another money issue hangs over the Ebola outbreak. Due to political tumult and corruption in Congo, the United States has frozen most of its $200 million or so in foreign assistance for the country. This is understandable, Klain notes. But he points out: “The problem the Ebola responders are facing is community resistance to the response: People don’t believe Ebola is real, they think it’s a government conspiracy, it’s not their No. 1 health concern. Every expert says that what you should do is build health clinics to treat all sorts of ailments and win community support. That helps facilitate the Ebola response. But the administration has banned the release of assistance to build these clinics because they are not—directly—emergency response. This needs to change.”

As alarming as this new outbreak is, the situation could quickly turn much more dangerous. To date, this volley of Ebola has struck rural areas. But it is slowly edging toward the city of Goma, with a population of 1 million. And Goma is close to massive refugee camps in South Sudan. If it reaches these locations, Klain remarks, “we are screwed. We had 300,000 vaccine doses when this started. We’ve used 120,000. That will help as long as the disease remains rural. But if it hits a city of 1 million?” The solution: Have vaccines ready. An experimental vaccine issued last year has been found to be 97.5 percent effective, according to data released by WHO. As of April, this vaccine had been given to over 90,000 people, including nearly 30,000 health care workers and other responders—and only 71 developed Ebola. It’s manufactured by Merck & Co. “So what should be done?” Klain asks. “Merck is not going to make 1 million doses if they don’t know that there is a buyer. So the US government should place an order for 1 million doses, and pay for them, and put them in storage. If they are needed in Congo/Uganda/Sudan, we ‘sell’ them to the global vaccine alliance (which gives the shots in Congo). But if we don’t send (what the pros call) the ‘demand signal,’ the vaccine doesn’t get made—and certainly not in time.”

With the advent of the vaccine, Ebola may seem a less frightening disease to people distant from the outbreak. And this latest epidemic has still not captured Americans’ notice like the previous one did—as today’s attention spans are overwhelmed by the crises, chaos, absurdities, and tweets of the Trump era. But there is a calamity under way in Africa. Hundreds have perished in agony. More deaths will come. And the threat could widen. What makes this story all the sadder is that simple actions Trump and his administration could implement to prevent more and much greater harm are going untaken.