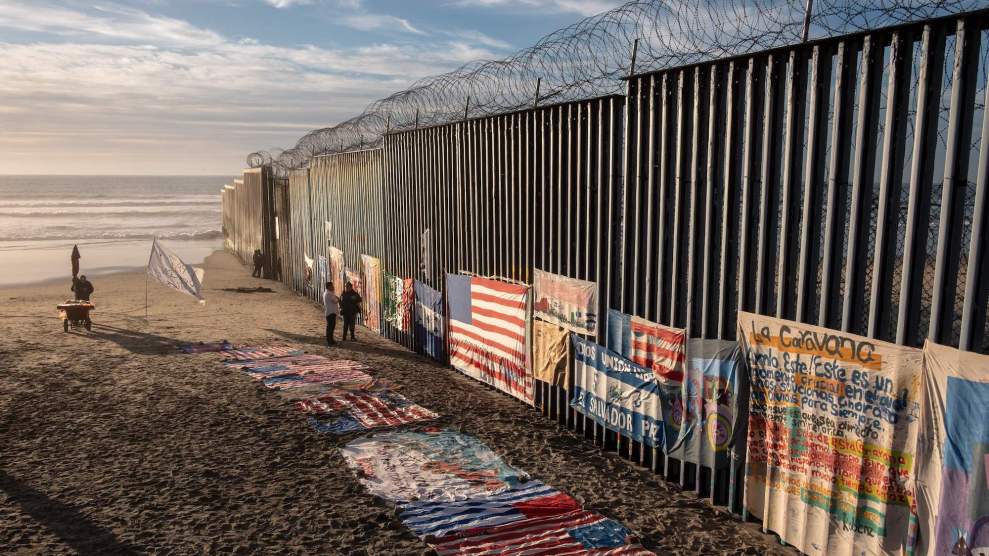 In April 2018, the Department of Homeland Security began using a new word to describe the situation at the southern border: crisis. The number of parents and children crossing the border to seek protection under US asylum laws was climbing to nearly 10,000 per month, up from barely a thousand at the start of the Trump administration. Trump did everything in his power to stop families from coming. He deployed the military to the border, separated parents from children, turned away asylum seekers at official border crossings, and then tried to make it illegal to request asylum unless people went to those crossings.

Nothing worked. More than 58,000 parents and children traveling together crossed the border last month, the seventh record-high in eight months. DHS officials have upped their hyperbolic rhetoric, saying that the immigration system is “on fire” and in “meltdown.”

At first, Democrats dismissed Trump’s fearmongering on immigration by pointing out that the total number of border crossers was still near historic lows. But as the number of parents and children coming to the border continues to skyrocket and the backlog of asylum seekers awaiting court hearings swells, it’s becoming clear to people across the political spectrum that doing nothing is not an option. Solutions are needed—the question is, what do they look like?

Mother Jones interviewed a half-dozen immigration experts from the left and center to see how they would create a fairer, more efficient, more humanitarian system for asylum seekers. Here’s what they recommend.

A backlog of nearly 900,000 asylum cases means that families seeking asylum often spend years living in the United States before their cases are decided by immigration judges. Most asylum seekers from El Salvador, Guatemala, and Honduras have not won their cases in recent years, and it’s even harder now that the Trump administration has limited protections for victims of gang and domestic violence, the most common forms of persecution in these “Northern Triangle” countries. Many of those who receive deportation orders, either because they lost their case or they did not apply for asylum after being released at the border, remain in the country as undocumented immigrants.

The backlog, combined with ICE’s limited ability to find people who don’t comply with removal orders, creates the accurate perception among migrants that families who turn themselves in to border agents are highly unlikely to be quickly deported. That presents an incentive for families unlikely to win asylum to cross the border anyway. More than 260,000 parents and children crossed the southern border between the 2016 and 2018 fiscal years. ICE deported about 7,000 family members during that period.

Trump has increased the number of immigration judges from 289 in 2016 to 435. But the backlog has been increasing by more than 100,000 cases per year, faster than under Barack Obama. That’s partly because of the surge in asylum claims but also because indiscriminate immigration enforcement has led to a dramatic increase in arrests of immigrants without criminal histories and forced judges to reopen cases they had set aside. The president is asking to fund 100 new judges in his 2020 budget, while Democrats have called for hiring at least 300 judges over four years.

Those numbers of hires would barely put a dent in the backlog in the short term. That’s why some experts think the administration should bring entire new classes of judges into the fold. Paul Schmidt, who served as an immigration judge from 2003 to 2016, suggests training retired state judges to handle bond and scheduling hearings so that judges have more time to handle asylum decisions. Kristie De Peña, director of immigration at the center-right Niskanen Center, proposes appointing emergency judges to decide asylum cases, and says that to assuage concerns about the Trump administration’s hiring, these judges could be selected by groups such as the American Bar Association and signed off on by governors.

While serving as Bill Clinton’s top immigration official in the 1990s, Doris Meissner eliminated a similar asylum backlog with a series of technical fixes. Previously, asylum seekers were eligible for work permits immediately, even if their cases wouldn’t be resolved for years, giving people with weak asylum cases an incentive to come to the United States and start working. To remove that incentive, Meissner imposed a six-month waiting period before asylum seekers were eligible for work permits and made sure that nearly all cases were decided within six months. The number of new asylum applications fell by more than half within a year, and the share of claims that were approved eventually more than doubled.

Meissner, now a senior fellow at the Migration Policy Institute, proposes another change that could have a huge impact on the backlog: letting asylum officers, not immigration judges, make the initial decisions in asylum cases.

Those officers already decide many asylum cases—for people who weren’t stopped at the border—and conduct all the “credible fear” interviews that determine whether asylum seekers have a strong enough case to go before an immigration judge. If officers took the place of immigration judges in asylum cases, migrants arriving at the border with strong claims would have their asylum approved more quickly, allowing them to bring their families to the United States rather than waiting years for a hearing before being allowed to bring relatives. Those with weaker claims, sensing that they’d be denied quickly and deported, might skip the trip and avoid taking on massive debts in a futile attempt to win asylum.

Another solution that could spare asylum seekers a long and uncertain trip to the United States and cut down on the backlog would be letting Central Americans apply for refugee status from their home countries. The Obama administration started a program along these lines, but the Trump administration quickly ended it. Democrats are calling for bringing back an expanded version so people have an alternative to traveling to the border.

Schmidt also thinks attorneys should be provided to asylum seekers so they’re informed of their legal rights and cases run more smoothly. The problem for the Trump administration, he says, is that fairer hearings would likely lead to more people winning their cases. Instead of running an effective asylum system, the Trump administration practices what Schmidt calls “malicious incompetence,” a noxious mix of bureaucratic dysfunction and intentional undermining of legal protections for asylum seekers. “If you had a competent administration willing to put the money in the right places,” he says, “you could solve this problem, and it wouldn’t cost as much as all the stuff they’re doing now.”

There’s no issue where the government and immigrant advocates differ more sharply than immigrant detention. The vast majority of families are quickly released at the border because of detention capacity constraints and the Trump administration’s recognition that short-term detention doesn’t do much to deter immigration. Under both Obama and Trump, DHS has sought to detain families for longer than the current legal limit of about 20 days and quickly deport them if they lose their cases.

Indefinite family detention is a nonstarter for immigrant advocates, who point to the government’s abysmal track record on immigration detention, the traumatic impact detention can have on children, and the challenges of fighting cases from behind bars. Immigrant advocates and Democrats in Congress oppose all family detention, preferring to release immigrants and track them with ankle monitors and check-ins with case workers.

De Peña is trying to find a middle ground. She proposes a solution that would avoid prolonged detention and the quick releasing of families at the border, while taking advantage of a move Trump already made. Trump has cut refugee admissions to record lows, forcing resettlement agencies to close offices and lay people off. De Peña wants to bring some work back to these agencies by having the government contract with them to house families seeking asylum. Under her plan, the families would be located in proximity to one another and have access to schools, medical facilities, and lawyers. They could move about freely, though they’d be monitored with ankle bracelets, as they often are now. That way, families seeking asylum wouldn’t be locked up like criminals, but they would also be less likely to disappear into undocumented life in American cities.

Almost everyone in both parties supports sending foreign aid to Central America. Senate Democrats’ border plan, which was first introduced in October, provides $3 billion in aid to address the “root causes” of migration from the Northern Triangle, specifically poverty and violence. The outlier is Trump, who is moving to cut off aid to Central America despite his own acting DHS secretary’s support for that assistance.

But that foreign aid is not likely to be a quick fix. Michael Clemens, a senior fellow at the Center for Global Development, and researcher Hannah Postel concluded in a 2018 article that the chance of deterring migration through development assistance is “weak at best.” To greatly impact migration, they found, aid would have to work in “unprecedented ways” over multiple generations. There is some evidence that security assistance for neighborhood-level programs such as community policing can reduce migration, but economic aid could actually have the opposite effect, boosting migration from the poorest areas of the Northern Triangle by giving people the resources needed to reach the border. Clemens considers Trump’s decision to cut off aid “vacuous and nihilistic,” but he believes foreign aid mostly gets as much attention as it does because it’s a “political winner”—not an actual short- or medium-term solution to the migration challenge.

People are leaving the Northern Triangle to escape intense gang violence, find jobs, or reunite with relatives—often all three. The problem is that economic and family concerns aren’t valid grounds for asylum, but asylum is essentially the only way for most Central Americans to come to the United States legally. (The State Department rejects nearly all tourist visa applications from low-income Central Americans, worried that they’ll overstay their visas.) But asylum doesn’t have to be the only path into the United States.

Last year, the Department of Labor approved nearly 400,000 guest workers recruited by US employers to work in agriculture and other seasonal industries. The vast majority of the temporary work visas have gone to Mexicans, many of whom have longstanding relationships with specific employers. The United States could easily require or encourage employers to hire more Central Americans. Clemens calls this the “lowest-hanging fruit” for accommodating people whose countries are passing through the same phase of economic development that caused migrants to come to the United States from everywhere from Sweden to South Korea in previous generations.

Opening up more visas for Central Americans wouldn’t require legislation and could be done “literally next month,” Clemens says. And given that Trump and his family already employ many of these guest workers, he says, “they know all about it.”