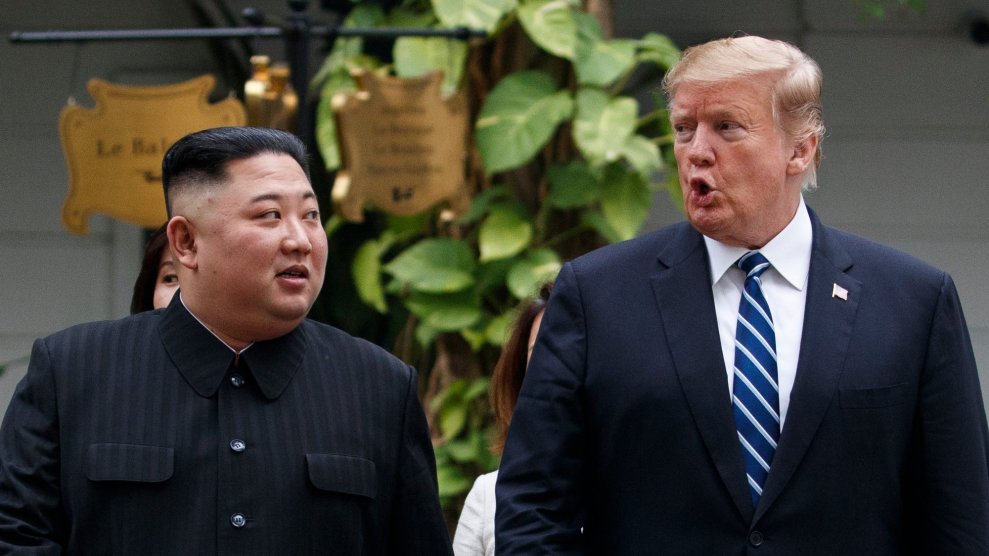 For more than a year, President Donald Trump has been boasting on Twitter that his on-again, off-again diplomacy with Kim Jong Un has convinced the North Korean dictator to halt his provocative weapons tests. In particular, Trump has cited Kim’s pledge to freeze testing of nuclear weapons and intercontinental ballistic missiles as a signature foreign policy accomplishment.

North Korea has not conducted a Missile Test since November 28, 2017 and has promised not to do so through our meetings. I believe they will honor that commitment!

A message from Kim Jong Un: “North Korea will stop nuclear tests and launches of intercontinental ballistic missiles.”
Also will “Shut down a nuclear test site in the country’s Northern Side to prove the vow to suspend nuclear tests.” Progress being made for all!

There hasn’t been a missile or rocket fired in 9 months in North Korea, there have been no nuclear tests and we got back our hostages. Who knows how it will all turn out in the end, but why isn’t the Fake News talking about these wonderful facts? Because it is FAKE NEWS!

So when North Korea launched a series of short-range projectiles last night, analysts wondered how Trump would respond. True, Kim had not technically broken his promise, which covered only nuclear weapons and ICMBs. But the latest test “does raise questions about how much President Trump will tolerate, and how far his trust of Kim Jong-un can stretch,” the Wilson Center’s Abraham Denmark told the New York Times.

On Saturday morning, Trump seemed to answer those questions. In a tweet, the president avoided mentioning the weapons test directly and instead declared that Kim “knows that I am with him & does not want to break his promise to me.” Trump pledged that a deal to relieve sanctions on North Korea “will happen!”

Anything in this very interesting world is possible, but I believe that Kim Jong Un fully realizes the great economic potential of North Korea, & will do nothing to interfere or end it. He also knows that I am with him & does not want to break his promise to me. Deal will happen!

Trump’s public response stands in sharp contrast to reports about his initial reaction to the news. Alex Ward, an international security reporter at Vox, wrote that shortly after Trump was briefed on the test, one source said the president was “pissed off, like Kim fucked him over.” Ward added that last night, “senior aides were ‘urging [Trump] not to tweet anything’ until he spoke with South Korean President Moon Jae-in, who leads his own talks with North Korea to improve ties on the peninsula.”

A Times analysis Saturday suggested two possible motivations for latest weapons test. First, Pyongyang might be pressuring Trump to ease sanctions on the rogue nation “by signaling that it could scuttle his biggest diplomatic achievement with the North.” More ominously, the paper noted, Kim might also be “deliberately provoking Mr. Trump into lashing out with fiery rhetoric so that the North could use that as an excuse to resume nuclear or long-range missiles.”

For now, Trump seems to be sticking with diplomacy. The president’s Saturday tweet, Ward wrote, is “about as good as we could expect at this point.”