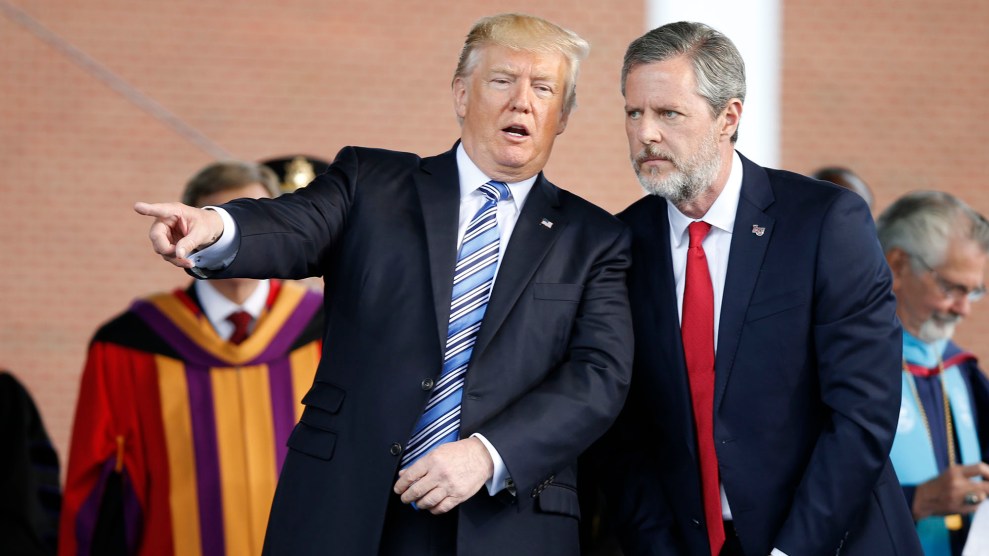 Donald Trump’s onetime lawyer and fixer helped line up a crucial endorsement for his boss on the eve of the Iowa caucuses in 2016, securing the support of prominent evangelical Jerry Falwell Jr. According to Reuters, Falwell’s endorsement came months after Cohen had done him a very big solid: Cohen helped Falwell and his wife prevent racy “personal” photos from becoming public.

Cohen, who reported to prison earlier this week to serve a three-year sentence for federal campaign violations and lying to Congress, told comedian Tom Arnold, who surreptitiously recorded the conversation on March 25, that he had prevented someone with compromising photos of the Falwells from releasing them to the public.

Before Falwell officially endorsed Trump, he was featured in a 60-second radio advertisement from Trump’s campaign. Falwell made an appeal to evangelical voters, who were expected to vote for Ted Cruz, by comparing Trump to his father, popular conservative televangelist Jerry Falwell Sr., who founded Liberty University, one of the largest Christian universities in the world. “I see a lot of parallels between my father and Donald Trump,” Falwell says in the ad, which used audio from Falwell’s introduction of Trump at a rally at Liberty University. “He speaks the truth publicly, even if it is uncomfortable for people to hear.”

Falwell then spoke at the 2016 Republican National Convention, calling Trump “America’s blue collar billionaire” and urging viewers to vote for the Republican nominee. “He has created jobs for thousands and is one of the greatest visionaries of our time,” he said. (Trump, in turn, gave the 2017 commencement address at Liberty University.)

Throughout the 2016 campaign, Falwell boosted Trump’s campaign on his Twitter and in interviews with the media.

Wise for @realDonaldTrump to reserve his options to challenge a rigged election if Dem fraud is as rampant as many expect it will be.

Falwell continued to support Trump even after the leak of his lewd comments about women in a tape from Access Hollywood, blaming the leak on a conspiracy to harm the Republican candidate. Although he called Trump’s comments “reprehensible,” he did not rescind his endorsement, saying, “We’re all sinners, every one of us. We’ve all done things we wish we hadn’t.”

Falwell also made an appearance at Trump’s victory party, after speaking with him on the phone three times on Election Day.

Falwell has continued to stick by the president in office, even after Trump called white supremacists “very fine people,” and after he began separating children from their parents at the US–Mexico border. In an interview with the Washington Post published on Jan. 1, 2019, Falwell said of Trump, “I can’t imagine him doing anything that’s not good for the country.”

Just this week, Falwell tweeted that Trump should have two years added to his term as “reparations” for Robert Mueller’s investigation. Trump retweeted the message.

After the best week ever for @realDonaldTrump – no obstruction, no collusion, NYT admits @BarackObama did spy on his campaign, & the economy is soaring. I now support reparations-Trump should have 2 yrs added to his 1st term as pay back for time stolen by this corrupt failed coup