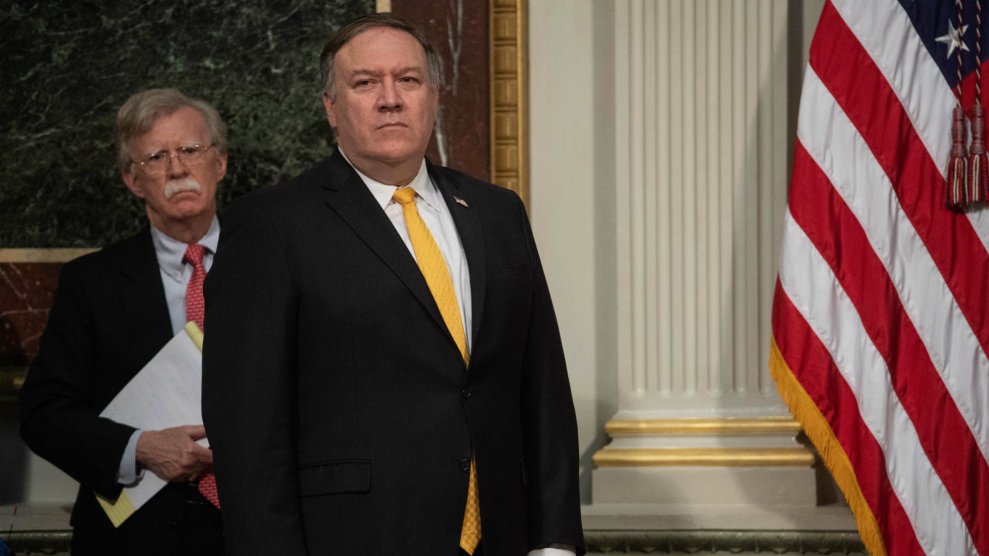 Since Juan Guaidó, the opposition leader recognized by the United States and more than 50 other countries as Venezuela’s interim president, launched an unsuccessful military uprising last week to seize power from embattled dictator Nicolas Maduro, top Trump administration officials were quick to announce a decisive end to the conflict.

Secretary of State Mike Pompeo and national security adviser John Bolton are among Guaidó’s most outspoken international backers, but their depiction of fractures in Maduro’s inner circle and among the military have consistently been contradicted by what has unfolded in Caracas. Despite four months of relentless American pressure, Maduro, not Guaidó, occupies the Miraflores Palace, while ongoing clashes between protesters and Maduro’s allies have left four people dead and hundreds injured. Millions of Venezuelans are starving amid a severe economic crisis that was amplified in January by new US sanctions on the state-owned energy giant. The move did not precipitate Maduro’s swift ouster, as many high-ranking military leaders have remained loyal to him.

“If someone tells you the military no longer wants Maduro, that’s really hard to maintain,” Andrei Serbin Pont, a Venezuela expert at an Argentine research group, tells Mother Jones. “The post-Maduro scenario doesn’t look good for them. They’ll be persecuted for human rights abuses.”

But while this emergency has continued, the responses from Pompeo and Bolton have ranged from bold to contradictory. Here’s a rundown of Washington’s reactions over the past week to the political calamity that has already created a humanitarian crisis in Venezuela and sent millions of refugees across its borders.

Bolton says three of Maduro’s allies abandoned him. They didn’t.

On April 30, Guaidó stood beside soldiers at an air force base in Caracas and announced the imminent end of Maduro’s regime. Bolton used the occasion to send a message to three Venezuelan officials who he considered the likely candidates to help usher in a transitional government with Guaidó at the head:

.@vladimirpadrino, @Ivanr_HD, @MaikelMorenoTSJ: Your time is up. This is your last chance. Accept Interim President Guaido’s amnesty, protect the Constitution, and remove Maduro, and we will take you off our sanctions list. Stay with Maduro, and go down with the ship.

The senior leaders mentioned in Bolton’s message lead the defense establishment, Maduro’s presidential guard, and the supreme court. “All agreed Maduro had to go,” Bolton told reporters outside the White House, implying that the United States had been communicating with them. Whatever agreement the US foreign policy leadership assumed it had made with the officials did not stand up. “These officers looked right through it,” Serbin Pont said.

All three remained loyal to Maduro, and that night, one of them, Defense Minister Vladimir Padrino López, rejected the American overture. Standing alongside Maduro, Padrino López said, “Do not come to buy us with a dishonest offer, as if we do not have dignity.”

Ben Rhodes, the former deputy national security adviser in the Obama administration who now leads a progressive advocacy group that focuses on national security, mocked Bolton over the fallout on Twitter.

I wonder what Fox News contributor John Bolton would have said if the Obama Nat Sec Advisor said publicly that three leading foreign officials agreed to his plan and then all three said they hadn't: https://t.co/bKeM65kEMX

The roots of the Venezuelan officials’ reversal may have been months, even years, in the making, the Associated Press reported on Saturday. In May 2017, Gen. Ivan Hernández, a leader targeted by the United States who oversees Maduro’s presidential guard, desperately needed a favor from the Trump administration when he sought a visa for his three-year-old son to get medical treatment in Boston. The request was denied, and two years later, Hernández stuck with Maduro in defiance of Bolton’s assurance that he had turned. Most of the country’s powerful generals remained loyal to Maduro, but Manuel Figuera, the head of Venezuela’s secret police, was the prominent exception. He disappeared last week after releasing a letter that said it was time to “rebuild the country.”

The US backtracks on its involvement in the negotiated peace

What role the United States actually played in negotiating with Maduro’s inner circle remains unclear. In an interview with CNN’s Wolf Blitzer on April 30, Pompeo joined Bolton in suggesting the US had been speaking directly with the three advisers Bolton had named. “We know that there were senior leaders inside the Maduro government that were prepared to leave,” Pompeo said. “They told us as much over the past few weeks.”

This depiction of events did not align with what Elliot Abrams, the US special envoy to Venezuela, told reporters that same day. “He said the US wasn’t involved in those talks but did know about them,” NPR’s Michele Kelemen reported. That was the same story Bolton shared the next day in an interview with radio host Hugh Hewitt. In a sharp contrast to what the secretary of state had said, Bolton insisted the talks were “handled by the opposition in Venezuela.” He added, “The United States was not directly involved in it.”

It’s not the first time Pompeo has been left to defend a whipsaw change in US policy. Last month, Trump and Bolton endorsed the campaign of a Libyan warlord to take Tripoli days after Pompeo had urged an “immediate halt” to his military offensive. It also wouldn’t be the last time Trump undermined Pompeo on Venezuela in particular.

Pompeo and Trump on different wavelengths with regard to Russia

Of Maduro’s remaining international backers, Russia and Cuba are the two that Washington has blamed the most for propping up his rule. The State Department has long accused Russia of meddling in Venezuela, where the Kremlin owns several oil fields and maintains a sizable stake in the state-run oil firm, while Cuba drew Trump’s ire for sending medical and support staff to Venezuela.

One of Pompeo’s more remarkable assertions about Maduro’s shaky hold on power concerned Russia’s behind-the-scenes influence in Venezuelan affairs. “It’s been a long time since anyone has seen Maduro,” Pompeo told Blitzer. “He had an airplane on the tarmac, he was ready to leave this morning, as we understand it, and the Russians indicated he should stay.” Russia denied this account and accused Pompeo of using “fakes” to launch an “information war.”

The bad blood carried over to an awkward phone conversation the next day with Russian Foreign Minister Sergey Lavrov. During the call, the State Department said Pompeo “stressed that the intervention by Russia and Cuba is destabilizing for Venezuela.” According to the Russians, Lavrov said American actions there have constituted a “gross violation of international law” and would be “fraught with the most serious consequences.”

Only two days after Pompeo’s conversation with Lavrov, their bosses had a conversation that seemingly reset the whole paradigm. During the call with Russian President Vladimir Putin, Trump all but ceded the American position. “He is not looking at all to get involved in Venezuela,” Trump said, “other than he’d like to see something positive happen for Venezuela.”

How Trump responds next is anyone’s guess, but he offered a clue on Fox News last week.

“We’re doing everything we can do short of, you know, the ultimate,” he said, grimly referring to military action. “There are people who would like to have us do the ultimate.”