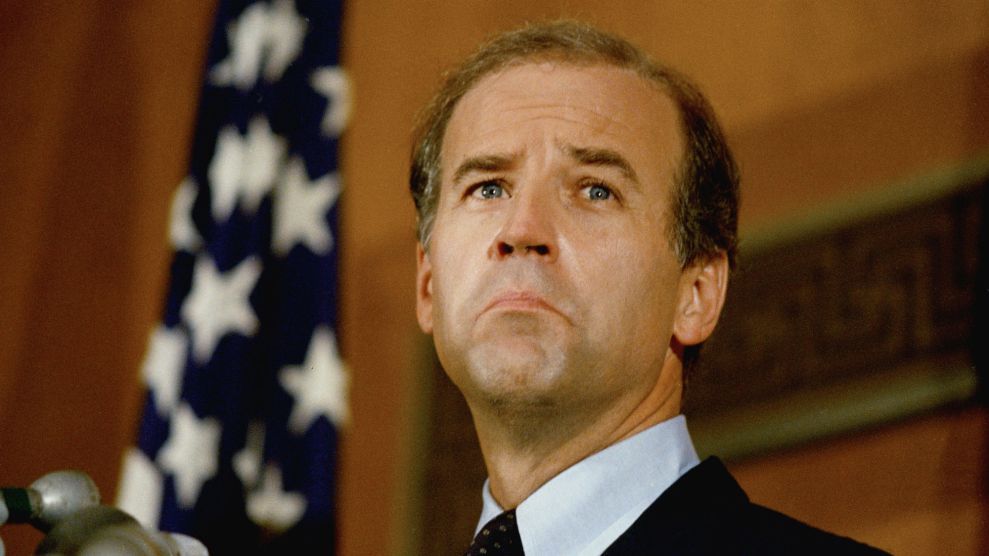 Joe Biden’s long political record has been picked apart with increasing intensity over the past few months, and now that he’s officially in the race for 2020, a number of influential voices on the left have decried his troublesome role in shaping the modern criminal justice system. But one slice of this record has gone somewhat more under the radar: his legacy of harsh rhetoric on marijuana.

In September 1989, Biden, then a United States senator from Delaware and chair of the Senate Judiciary Committee, gave a lecture to students at Wake Forest University about the process of nominating and confirming federal judges. Afterward, according to a clip surfaced by Mother Jones, he took questions from the students.

“Is it proper and legitimate for a government to take an action which we know expressly will lead to the mental and physical demise of an individual?” Biden asked. “I say no.”

“My wife believes that so-called recreational drugs ought to be legalized [and controlled], as booze is. What’s your view on that?” someone asked him.

“It is a legitimate argument,” Biden replied, “one which I reject.”

He went on to say that legalizing “synthetically produced, mind-altering drugs or cocaine or heroin or marijuana” would, in fact, take the profit motive out of the drug trade and, if not eliminate, significantly reduce the violence associated with it. But doing so would be a “significant moral hurdle” for the government, he said, because unlike the case with alcohol, “you cannot be a recreational user” of “certain [other] drugs.”

“Is it proper and legitimate for a government to take an action which we know expressly will lead to the mental and physical demise of an individual?” Biden asked. “I say no.”

To be clear, Biden was talking about a variety of drugs, not just marijuana. But that’s also exactly the point: Biden, at least in 1989, didn’t differentiate; he categorized marijuana with harder, more addictive drugs like heroin or cocaine. Though the clip is decades old and from a time when many politicians and citizens probably agreed with him, advocates and activists point out that Biden has yet to evolve in his view of cannabis, as much of the country and some other 2020 contenders have. The other Democratic candidates are largely united in voicing support for legalization, seeing it as a key tenet of racially progressive politics and criminal justice reform.

Biden is lagging behind, says Erik Altieri, executive director of the marijuana advocacy group NORML. “If this is an issue that you care about, there couldn’t be a worse candidate to support at this moment than Joe Biden.”

“If this is an issue that you care about, there couldn’t be a worse candidate to support at this moment than Joe Biden.”

“And that does include the Republican side,” Altieri argues. Donald Trump, he notes, has at least voiced support for states’ authority on cannabis. “Granted, [Trump] hasn’t taken any actions in the affirmative on that while in office. His public comments are to the left of Joe Biden on marijuana.”

Biden’s campaign did not respond to a request for comment from Mother Jones.

“He feels like a relic of a different era when you listen to him talk about marijuana issues,” Altieri adds. “Just in the past several years, he’s reiterated that he believes marijuana is a gateway drug that leads to harder drugs and that he thought legalization was generally a bad idea.”

In December 201o, for example, then-Vice President Biden told ABC News that he thinks cannabis is a “gateway drug”—a theory for which the evidence is shaky at best—and that “legalization is a mistake.” A little over three years later, Biden again said in an interview with Time magazine that he still doesn’t support legalization, though he thinks the idea of “focusing significant resources” on convicting people for smoking marijuana is a “waste.”

Kyle Jaeger, writing at cannabis news site Marijuana Moment, points out that last month Biden may have left a clue as to his latest thinking: At a panel about the opioid epidemic hosted by the University of Pennsylvania, Biden seemed to praise the anti-cannabis perspective of another panelist, Harvard Medical School psychobiology professor Bertha Madras, who said she doesn’t like to use the term cannabis. “I prefer to call it marijuana,” she said at one point during the panel. “[Cannabis is] a Latin terminology that tries to sanitize the fact that in this country, it’s marijuana.” (Cannabis advocates argue, on the other hand, that the term marijuana historically has been used by law enforcement officials to racialize the drug and sow fear during the reefer madness era.) She also said that “the data does not show” that cannabis is a substitute for opioids to relieve pain and criticized some states’ efforts to legalize medical marijuana on that basis. (As Madras herself points out, however, there are few clinical trials on cannabis and opioid addiction.)

Afterward, Biden clapped and appeared to say to another panelist, “She’s right.”

“Not only his failure to respond to that sort of reefer madness rhetoric but to applaud it was incredibly disheartening,” says Altieri. “And it would be hard to imagine any of his competitors in the Democratic primary doing the same.”

As a central figure in drafting tough-on-crime legislation, including the 1988 Anti-Drug Abuse Act and the 1994 crime bill, Biden fought for a tightening of the American criminal justice system as part of the war on drugs. As my colleague Hannah Levintova writes, “Taken together, these bills—which increased sentences for offenses involving drugs most prominent in low-income and nonwhite communities—funded new prisons and enacted a provision requiring mandatory life sentences for certain offenders.” As a result, mass incarceration vastly expanded, disproportionately affecting communities of color.

For his part, Steve Hawkins, executive director of the marijuana policy reform organization Marijuana Policy Project, says he is “not prepared to write [Biden] off.” “Hopefully, we will see [him] embrace the fact that there’s been that shift in public attitude,” says Hawkins. “He certainly has come to recognize that our mass incarceration system has been fueled by the war on drugs. But he and every other person running for president should be asked clearly, what is their position on marijuana policy?”

“Fundamentally, he’s someone who cannot be trusted on this issue.”

2020 may be a good time for Biden to change his tune, advocates say. “I’ll be surprised if Biden hasn’t softened his opinion,” says Michael Collins, director of national affairs at Drug Policy Action—the political arm of drug reform advocacy group Drug Policy Alliance—adding that he thinks “politically it’s not feasible” to stand apart from the primary field and oppose marijuana legalization.

According to a 2018 Pew poll, 62 percent of Americans say the use of marijuana should be legalized, including 45 percent of Republicans. And according to a Change Research New Hampshire survey released in January, marijuana legalization came out as the third most important issue to likely Democratic voters. Among those who considered legalizing marijuana their top issue, 47 percent favored Bernie Sanders, followed by 18 percent favoring Biden.

But even if Biden were now to support legalization on paper, Collins says that “fundamentally he’s someone who cannot be trusted on this issue.” He adds, “I would not be confident that Joe Biden…would select somebody who would be open-minded on marijuana policy as attorney general.”

“There are some very good candidates out there on our issues,” Collins says. “Joe Biden is not one of them.”