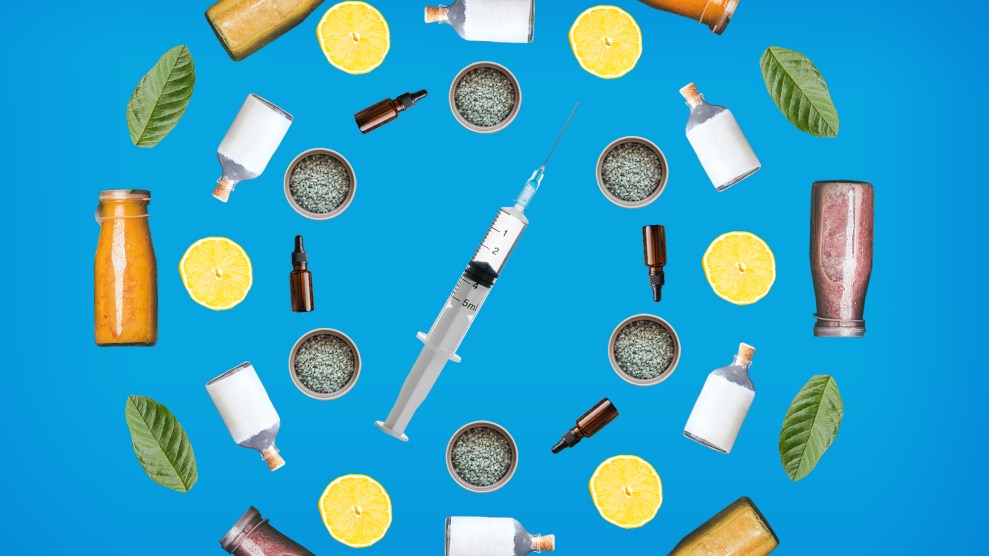 Say it with me now: Vaccines are safe and effective! In the midst of the largest measles outbreak since the disease was declared eradicated in the United States in 2000, public health officials are working tirelessly to promote that message. Yet people who oppose routine immunization are still undermining their work. Antivax groups—which encourage parents not to immunize their children—have launched ambitious and successful disinformation campaigns.

And there’s another group of people spreading dangerous rumors about immunizations: Bloggers and entrepreneurs promoting remedies that they say can rid the body of the toxins they claim come with immunizations. Some of them recommend home-remedy style “detox” regimes consisting of blends of essential oils, special juices, and baths. Others hawk actual products. Two ounces of Professional Formulas Childhood Immunization Detox homeopathic drops costs $18 online. A one-ounce vial of Liddell’s Vaccines Detox oral spray costs $23.75.

“They’re trying to make money off parental worry, and they’re adding to this environment of fear.”

All of this might seem benign. What’s the harm in giving your kid a relaxing bath after getting a shot? And unlike anti-vax campaigners, many of the people who promote vaccine detox remedies claim not to have an opinion on whether parents should vaccinate. “While I am not an epidemiologist or immunologist to give you guidance on how to specifically protect children against world disease, I did in-depth research on the ingredients in certain vaccines in this post,” states a recent post on a website called Naturally Made Mom. Another blogger, Anya Vien, says, “Regardless of what your stance on vaccines for children or adults is, you should know that the ingredients in vaccines are toxic to the human body.”

But the public health experts I spoke to said these seemingly evenhanded statements belie a very real threat. They worry that the claim that people need to “detox” after vaccines could undermine public trust in immunizations. “It’s just sad,” says Saad Omer, an epidemiologist who studies vaccine hesitancy at the Emory Vaccine Center. “They’re trying to make money off parental worry, and they’re adding to this environment of fear.” Ofer Levy, a vaccine researcher and pediatrician with Boston Children’s Hospital and Harvard University, agreed. “These people are claiming that they are helping people who decide to vaccinate under pressure,” he said. “But the message that is getting out is that vaccines are toxic.”

So let’s take a closer look at that message. Many supporters of vaccine detox regimes claim that the “toxic” part of the shot isn’t the vaccine itself, but rather the additives. They often point to the Centers for Disease Control and Prevention’s list of ingredients commonly added to shots. “I can summarize the effect these ingredients have on the body in two words: carcinogenic and neurotoxic,” states the Naturally Made Mom post.

That’s not exactly true, says Cathryn Nagler, a professor of immunology at the University of Chicago and a member of the American Association of Immunologists. The amounts of potentially toxic substances found in vaccines are tiny—and they’ve been shown to be safe. One of the most common additions to vaccines is a form of aluminum called alum that boosts the body’s immune response to make the vaccine more effective. Forms of aluminum have been used in almost all vaccines for more than 40 years, and studies show that the tiny amount found in vaccines is safe—in fact, it’s not even really absorbed into the body.

Another ingredient is formaldehyde, a minuscule amount of which is used to inactivate viruses in live vaccines. This substance, which occurs spontaneously in nature and is even produced inside our bodies, is mostly washed away during the vaccine manufacturing process. Toxicologists have shown that the residue that’s left is not dangerous. Then there’s thimerosal, the form of mercury used as a preservative in vaccines that physician Andrew Wakefield fraudulently claimed caused autism in a paper published by the Lancet in the late 1990s. (The paper was retracted in 2010.) The tiny amount of thimerosal used in shots “does not pose a health risk,” states the World Health Organization. Reams of studies have disproved any link between thimerosal exposure and autism. “From an immunologist’s perspective, I feel confident that these additives are very safe,” says Nagler.

Hawkers of detox remedies also like to claim that children, because of their immature immune systems, are especially vulnerable to the supposedly toxic effects of vaccines. “Even an adult’s body does not easily rid itself of heavy metals,” says the Naturally Made Mom post. “A child’s organs are even more incapable.” To the contrary, Harvard’s Levy sees infections such as measles as the truly dangerous threat to children. Immunizations, on the other hand, are formulated to be well tolerated even by infants, he has shown. “Vaccines are some of the most rigorously studied interventions in all of medicine, and we know their components are safe,” he says.

“Are these oils getting absorbed into your bloodstream? If so, what’s the effect on your body? Who knows?”

Detox remedies, on the other hand, are almost entirely unstudied. “People are talking about this oil and that oil, but they don’t provide any evidence for any of these treatments,” says Levy. “Are these oils getting absorbed into your bloodstream? If so, what’s the effect on your body? Who knows?”

In fact, the very idea that an essential oil or a mineral bath can somehow suck toxins out of your body has “no basis in science,” says Nagler. Humans have built-in mechanisms for filtering out substances we don’t need—the bacteria in our gut play a role, as do our liver and kidneys, she explains. “But drinking a tea or applying an oil is not going to serve this purpose.”

Emory’s Omer agrees. “There’s absolutely no evidence that these remedies do anything,” he says, “besides erode people’s trust in vaccines.”

As the US faces a record number of measles cases, Mother Jones wants to hear from you: Have you ever successfully convinced someone in your community to get vaccinated? What was your experience, and how did the person respond to you? Fill out the form below, email talk@motherjones.com, or leave us a voicemail at (510) 519-MOJO.