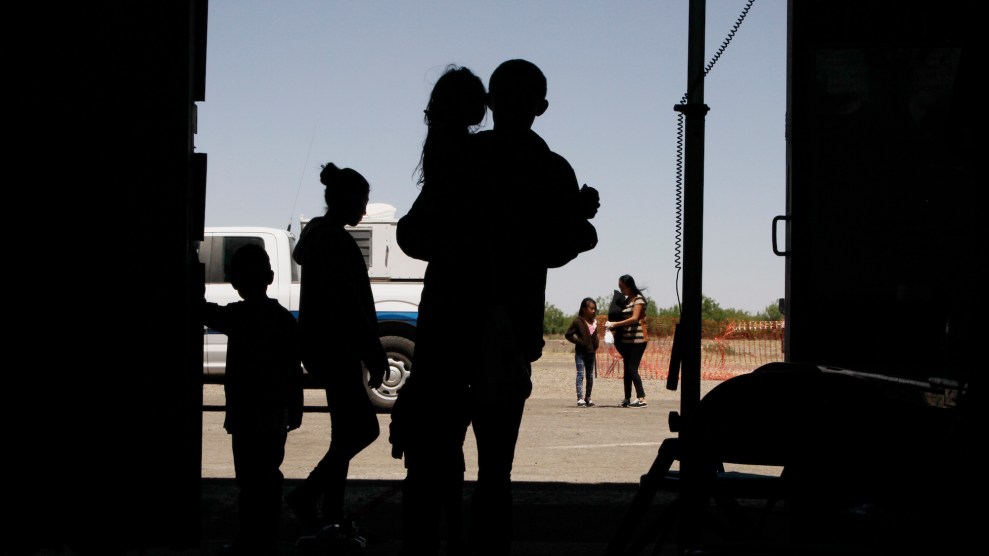 Migrants guide their children though the entrance of a World War II-era bomber hangar in New Mexico in May. City officials converted the hangar into a temporary shelter for asylum-seekers released by Border Patrol. Cedar Attanasio/AP

The Trump administration wants to conduct DNA tests on up to 100,000 migrants at the border to determine whether they’re falsely claiming to be family in order to avoid being detained.

Immigration and Customs Enforcement released a solicitation on Tuesday for a company to administer up to 50,000 DNA tests along the southern border between June and November, along with the option to conduct an additional 50,000 tests by April. The program, called Operation Double Helix 2.0, represents a dramatic expansion of a DNA testing pilot program that ICE launched earlier this month.

The tests are voluntary, so migrants whom ICE suspects of posing as families will only be tested if they consent. But the contracting documents suggest that parents would be more likely to be temporarily separated from their children if they do not submit to the test. DNA data collected by ICE will be destroyed after the tests are conducted, and the agency will not build a database of people’s DNA.

Single adults seeking asylum are generally sent to detention centers and private prisons across the nation. Families arriving at the border, by contrast, can be legally detained for only about 20 days, and in reality most are released more quickly than that, due to the government’s limited family detention capacity. Department of Homeland Security officials have repeatedly claimed that people are running “recycling rings,” in which children are sent across the border with unrelated adults. But DHS has provided little evidence to support those claims.

The government’s own data shows that fraud cases at the border are rare. Brian Hastings, Border Patrol’s head of law enforcement operations, said last month that Border Patrol agents identified more than 3,100 individuals who were implicated in family fraud cases between April 2018 and late March 2019. As the Los Angeles Times reported, that was about 1 percent of parents and children who crossed the border together during that period, but it included people who falsely claimed to be younger than 18, so the number of people falsely posing as families was likely lower. And because only parents or legal guardians and their children count as families under ICE’s standards, migrants traveling with siblings and grandchildren under 18 may have been included in the fraud statistics.

DHS announced earlier this month that agents with ICE Homeland Security Investigations, a part of ICE that usually focuses on serious criminal cases, had interviewed 562 families they suspected of potential fraud since April. About half of them turned out to be fraudulent families, according to ICE.

Under the pilot program, DNA tests were conducted by ANDE, a rapid DNA testing company that helped identify people killed by California wildfires last year. ICE now wants 14 DNA testing machines to be deployed at seven undisclosed locations in Arizona, California, New Mexico, and Texas. If one of the machines breaks, ICE wants to make sure it is replaced in a “prodigiously-quick manner.”