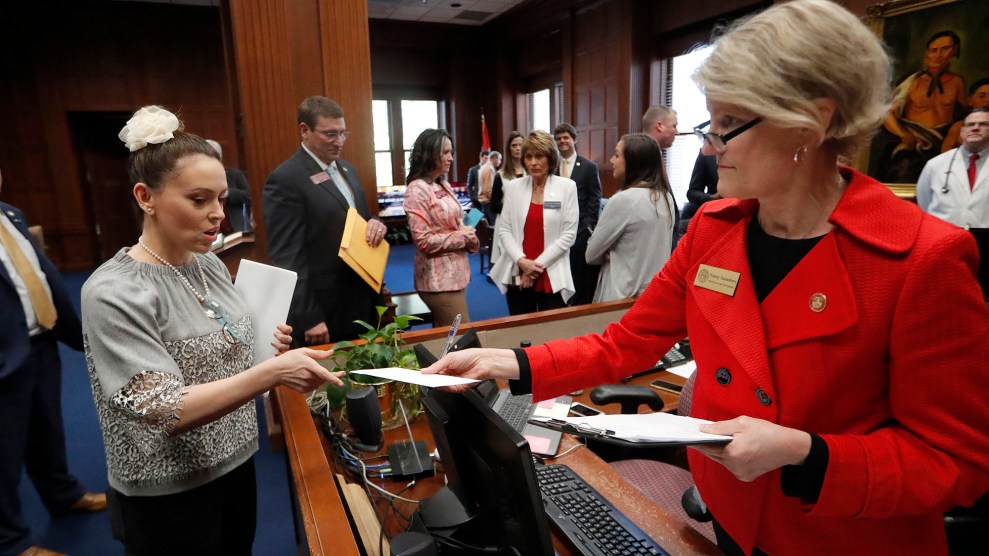 Several filmmakers and actors are refusing to work in Georgia after the state passed a law on Tuesday that bans abortion after about six weeks gestation, when a fetal heartbeat can be detected, before many women even know they are pregnant.

Among the production companies refusing to shoot in Georgia are Duplass Brothers Productions, which produced the Netflix documentary Aspergers Are Us; Killer Films, which has produced several Academy Award-winning and -nominated films, including Boys Don’t Cry and Still Alice; and Blown Deadline Productions, which is owned by David Simon, the creator of The Wire.

Georgia has become a popular filming site in recent years, thanks to tax incentives that were implemented in 2008; earlier this year, Georgia Gov. Brian Kemp estimated that the entertainment industry employs 200,000 Georgians and has generated more than $60 billion in economic activity in the state.

Popular TV shows like Sharp Objects, The Walking Dead, and Stranger Things have filmed in Georgia, as well as multi-million-dollar films like Black Panther and Avengers: Endgame.

Filmmakers have been tweeting their opposition to Georgia’s abortion restrictions.

I can’t ask any female member of any film production with which I am involved to so marginalize themselves or compromise their inalienable authority over their own bodies. I must undertake production where the rights of all citizens remain intact. Other filmmakers will see this. https://t.co/V2xDPKiMpo

Killer Films will no longer consider Georgia as a viable shooting location until this ridiculous law is overturned.

Don’t give your business to Georgia. Will you pledge with me not to film anything in Georgia until they reverse this backwards legislation?

Actors are also outraged by the new law, and some of them are refusing to work in Georgia as a result. Alyssa Milano threatened to quit the Netflix show Insatiable, which is filmed in Newnan, Ga. She wrote an open letter to Georgia Gov. Brian Kemp and Speaker of the House David Ralston denouncing the bill—50 actors, including Mark Hamill, Sophia Bush, and Amber Tamblyn, have signed their support to it.

To @BrianKempGA & Speaker Ralston:
Attached, is an open letter signed by 50 actors against #HB481. On behalf of the undersigned–as people often called to work in GA or those of us contractually bound to work in GA–we hope you'll reconsider signing this bill. #HBIsBadForBusiness pic.twitter.com/DsOmAWYU2x

After Kemp signed the six-week ban into law earlier this week, Busy Philipps gave an emotional speech on her late-night talk show Busy Tonight about the abortion she had as a teenager.

“No bill that criminalizes abortion will stop anyone from making this incredibly personal choice, but these laws will put more women at risk,” Philipps said. “Every woman deserves compassion and care, not judgment and interference when it comes to their own bodies.”

I spoke about my abortion on my show tonight because I can not sit idly by while women’s rights are stripped away. https://t.co/Vk4kh4ZBJq