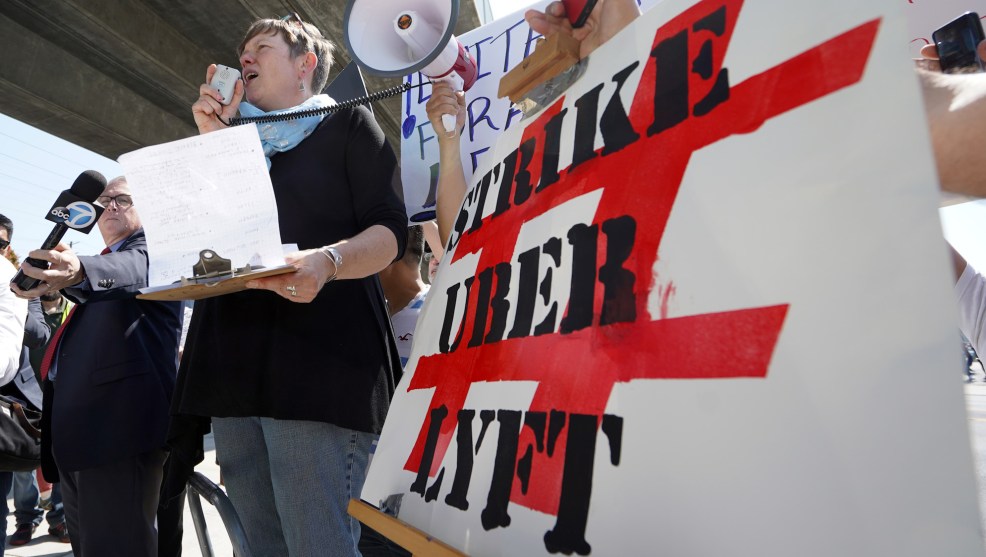 In March, Uber and Lyft drivers protested in front of a Los Angeles Uber office over a 25 percent pay cut. Scott Varley/SCNG via Zuma

On Wednesday, thousands of Lyft and Uber drivers will protest low pay, a lack of benefits, and poor working conditions from the companies in eight cities across the country.

They’ll have the support of several prominent 2020 Democratic presidential candidates.

Mother Jones asked 16 Democratic campaigns if they plan to honor the strike. Representatives for Andrew Yang, Eric Swalwell, Cory Booker, Tim Ryan, and Kristen Gillibrand affirmed that their campaigns would honor the strike. Tulsi Gabbard, Beto O’Rourke, Jay Inslee, Julian Castro, John Hickenlooper, Joe Biden, and Amy Klobuchar did not respond; Bernie Sanders and Elizabeth Warren also did not respond, but they have both publicly expressed for striking workers in the past.

Uber says it can't pay its drivers more money, but rewarded its CEO with nearly $50 million last year. People who work for multibillion-dollar companies should not have to work 70 or 80 hours a week to get by. I stand with the Uber and Lyft drivers going on strike on May 8.

Warren tweeted her support of a driver strike in March and has criticized Uber’s labor practices for the ways they keep the middle class from achieving economic stability.

.@Uber and @lyft executives are preparing to cash in by taking their companies public, so they're squeezing their drivers and slashing their pay. The drivers are fighting for living wages and better working conditions—and I stand with them.https://t.co/pjWvOCLHYC

Even as 2020 contenders sharply criticize the tech industry’s unregulated power, ride-hails have become central to modern campaign operations. According to first quarter campaign filings, Democrats have already collectively spent more than $10,000 on Uber and nearly $7,000 Lyft rides. In their campaigns’ first quarter, Warren, Yang, and Harris spent the most on ride-hails—about $3,000 each. Buttigieg’s campaign, which exclusively used Uber, reported spending about $600. Castro dropped the least, spending a little more than $400.

Worker criticism of Uber and Lyft gets at a key labor issue: A side effect of the gig economy is that many workers go without the protections and benefits of traditional jobs. But over the past five years of organizing, the efforts of ride-hail drivers have resulted in some change—New York City passed the first law in the country to require Uber to pay its drivers a $17.22 hourly minimum in December.

But federally, gig workers are even less protected under the Trump administration. In late April, the Department of Labor issued an opinion letter to an unnamed “virtual marketplace company” that the company’s “service providers” would be classified as contractors under the Fair Labor Standards Act.

In contrast, many 2020 Democrats have used their congressional offices to champion gig workers and demand dramatic labor reforms. Sens. Booker, Gillibrand, and Sanders all co-sponsored legislation that would increase bargaining rights for employees misclassified as independent contractors. Similar legislation was also sponsored by Harris and Warren during the last congressional session. Almost every 2020 Democratic candidate has expressed support for a $15 minimum wage.

“Big corporations like Uber and Lyft have a responsibility to their employees, but in order to pad their bottom lines, these companies twist themselves in knots to deny their workers rights and benefits,” Evan Lukaske, national press secretary for the Gillibrand campaign, said in a statement. “The solution is to empower these workers and force these corporations to the table.”

Other candidates also emphasized the need to support workers.

“Cory supports the Uber and Lyft drivers striking tomorrow across the country and supports their fight for higher wages and greater job security,” Booker press secretary Sabrina Singh wrote in a statement to Mother Jones. “As our labor market continues to change, we must redouble our efforts to ensure a living wage and meaningful benefits for all. In solidarity, Cory will not be crossing any picket lines tomorrow.”

“Technology has opened whole new frontiers of business and opportunity, but we can’t forget that working men and women are still the lifeblood of our economy in every sector,” said Rep. Eric Swalwell in a statement to Mother Jones. “I’ll always stand with working Americans.”

The support for striking workers has been a common theme in the 2020 race so far. During a 10-day strike by Shop & Stop supermarket employees in New England, Klobuchar and Buttigieg showed up on the picket line, as did Warren, while other candidates offered statements of support. Neither Klobuchar’s nor Buttigieg’s campaigns responded to Mother Jones‘ request for comment. Democratic candidates have also met with organizations like American Federation of Teachers and the International Association of Machinists and Aerospace Workers, and participated in a forum for Service Employees International Union workers.

The protest is planned in advance of the launch of Uber’s IPO on Thursday. Similar protests in California were staged before Lyft went public in April.

“We provide an essential service, but Uber and Lyft investors are only ones reaping the benefits,” said Karim Bayumi, a Lyft driver in a statement released by Drivers United LA. “Our picket and rally will show that rideshare drivers will not be invisible—we demand justice.”