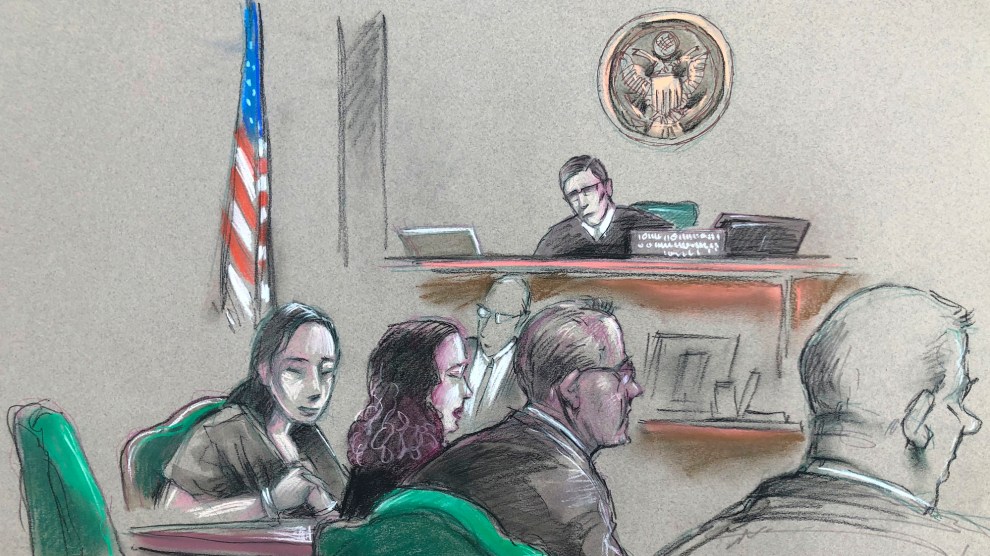 When Yujing Zhang, the Chinese woman arrested for allegedly sneaking into President Trump’s Mar-a-Lago club on March 30, appeared in court on Monday, a portion of the proceedings focused on a mysterious Chinese businessman named Charles Lee, who has ties to the Communist Party and the Chinese government and who appears to be at the center of this episode. A Mother Jones investigation of Lee has uncovered more questions about his business ventures and background.

According to an affidavit filed by the Secret Service, Zhang was arrested carrying four cellphones, a laptop, an external hard drive, and a thumb drive containing malware. She told a Secret Service agent she had been invited by a Chinese friend named Charles to a “United Nations Friendship Event” between China and the United States at Trump’s resort, where she hoped to “speak with a member of the President’s family about Chinese and American foreign economic relations.” At the hearing, prosecutors noted that during a subsequent search of Zhang’s hotel room, federal investigators found nine thumb drives, five SIM cards, a device used to detect hidden cameras, and about $8,000. But Assistant US Attorney Rolando Garcia noted, “The present charges have no allegation that she’s a spy or this is espionage, or whatever…There are a whole lot of questions that remain to be answered.” And one of those questions was what role this person called Charles played in an international incident that has prompted counterintelligence concerns.

During the proceedings, Zhang’s defense lawyer, Robert Adler, indicated that the Charles whom Zhang had referenced in her Secret Service interview was Charles Lee, and he noted that Zhang had paid $20,000 to a company associated with this Chinese entrepreneur to attend an event at Mar-a-Lago. Lee ran a group with a Beijing address (which was registered as a corporation in Delaware) called the United Nations Chinese Friendship Association—a name similar to the one Zhang had cited when first questioned by the Secret Service. And the Miami Herald has reported that Lee sold travel packages to Chinese businesspeople and others that included admission to events at Mar-a-Lago that were promoted by Li “Cindy” Yang, the Trump donor who founded a chain of Florida massage parlors, including the Jupiter-based spa where Robert Kraft, the New England Patriots owner, was busted in February for allegedly soliciting prostitution. (According to Yang, she sold the Jupiter location sometime in 2012 or 2013.) As Mother Jones first reported, Yang also ran a business, GY US Investments, that offered Chinese clients opportunities to “interact with the president” and other political figures at Mar-a-Lago and elsewhere. The firm’s website, which has since been taken down, promoted an event at Mar-a-Lago scheduled to begin later on the same day Zhang was arrested at Trump’s club. (That event had been canceled after Mother Jones and the Herald reported on Yang’s activities.)

Monday’s court hearing for Zhang drew more attention to Lee, whose real name is Li Weitian and who has referred to himself as “Prince Charles.” Previous stories by the Washington Post and Mother Jones revealed that aspects of his background did not fully check out. A Post reporter visited the address listed for the Beijing office of his United Nations Chinese Friendship Association (UNCFA) and found no organization of that name there, and the paper could not document claims Lee made about his education. Mother Jones reported that his UNCFA had links to Chinese Communist Party and government entities and that the group claimed that two US congresswomen and Transportation Secretary Elaine Chao were UNCFA officials. (They all denied any connection to Lee’s organization.) Nevertheless, Lee had managed to attend at least one Trump fundraiser and had posted photos that appear to show him with Trump and Trump’s sister, Elizabeth Trump Grau, as well as with former UN Secretary-General Ban Ki-moon.

And there are other odd elements of Lee’s past. Two online business cards for Lee listed him as the CEO or head of a variety of companies and organizations, including some that did not appear to be engaged in significant activities, among them an outfit called the United Nations Fund for Peace and Development and another named the United Nations Peace Development Bank Ltd. UN spokesman Stéphane Dujarric tells Mother Jones that Lee, the UNCFA, and these entities have no connection to the United Nations and that UN lawyers are looking into stopping Lee from using the UN name. “Unfortunately many organizations around the world wrongfully claim an affiliation with the UN and then try to exploit it commercially,” Dujarric says. “It’s kind of like playing whack-a-mole to get them to cease and desist.”

Here is where it gets more interesting. The address listed for Wang in the Colorado records for the United Nations Peace Development Bank and the United Nations China University was until recently an empty lot at the end of a road in Golden, Colorado. That lot was purchased in 2013 by a retired doctor from Michigan, who has asked not to be identified. He tells Mother Jones that as soon as he built a home on the property and put up a mailbox, he began receiving mail for 150 or so different business entities and people. “It was a bunch of people doing what I believe was fraudulent,” he says. “They used my empty lot as an address.” In 2017, he contacted the Colorado Bureau of Investigation about this mail and was informed the state law enforcement agency was conducting an inquiry. According to Colorado corporate records, at least a dozen firms used this address, each one registered by a person who appears to have a Chinese name.

Then there’s the address for Zhenggui Wang, the corporate agent, on the registration for the United Nations Fund for Peace and Development. That appears to lead to the office of a financial adviser in Brighton, Colorado. The adviser, Jordan Fuerst, says that for years his office has been receiving mail for a host of companies unrelated to his business. And, he notes, customs agents, postal investigators, and private detectives have frequently appeared at his door to inquire about companies that claim his office as an address. Once, he recalled, customs agents told him they had intercepted two shipping containers from China with counterfeit Ralph Lauren goods and fake Cree lightbulbs—and his office address had been listed as the recipient. Postal inspectors even set up a surveillance camera trained on his mailbox to see if they could discover anyone collecting mail from his address. “I don’t know how they’re making money,” Fuerst says. “But someone is going through a lot of work to do this.” When he first moved into this office about three years ago and noticed the influx of mail, he occasionally opened the packages addressed to phony recipients, and once he discovered a cache of hundreds of urine specimen containers (unused). Now he doesn’t accept any packages. “UPS and FedEx keep trying to give us boxes,” he says, “and we turn them away.”

So Wang, who registered these organizations with UN-related names, is associated with two addresses that seem to be used for false corporate registrations. A spokeswoman for the Colorado Bureau of Investigations confirms that its identity theft/fraud/cybercrime division has been examining both addresses “as part of an active investigation.” But she added, “I can’t provide specific details at this time.”

And in the Colorado corporation records, the United Nations Fund for Peace and Development lists its principal address in Alhambra, California, at the office of an accountant. This accountant tells Mother Jones he doesn’t know this organization, Charles Lee, or Zhenggui Wang, but he notes he has received mail for Wang at this address for years—which he called “a fraud.” On the Colorado records, the two other Wang-related groups with UN-ish names list mailing addresses at a different location in Alhambra.

What’s going on here? It’s hard to know. Lee did not respond to emails requesting comment.

On his Chinese-language LinkedIn page, Lee notes he is president of the US Wall Street Capital United Investment Group. In June 2010, through this company and two other firms, Global Chinese Alliance Development Ltd. and USA International Finance Consulting Group Ltd., Lee was part of a deal—a reverse merger—between Birch Branch, a Colorado coal company, and a Hong Kong firm called Shun Cheng Holdings HongKong Limited, which produced coke, refined coal, and coal byproducts in the province of Henan in the central region of China. This week the South China Morning Post reported that one of the participants in the Birch Branch deal was a delegate of the provincial People’s Congress in Henan. Three years later, in 2013, Birch Branch became a private company co-owned by Lee and another Chinese executive. According to a Securities and Exchange Commission filing, the company’s revenues for 2012 were $405,464,735, with a net loss of $ 33,092,652. (Timothy Brasel, the former CEO of Birch Branch, before the reverse-merger, did not return a call requesting comment.) A search for public information regarding Lee’s role in the company after it became private yielded no results.

There is still much to learn about Zhang’s alleged intrusion at Mar-a-Lago. Sorting out the connection between Zhang and Lee might be necessary for understanding what Zhang was doing at Trump’s club. At the hearing on Monday, Zhang’s attorney said he “may attempt to subpoena” Lee to testify in upcoming proceedings. Then maybe the public will end up with more answers about this Chinese businessman who calls himself Prince Charles and his involvement in an intriguing case that has raised serious concerns about espionage and security at Trump’s seaside resort.