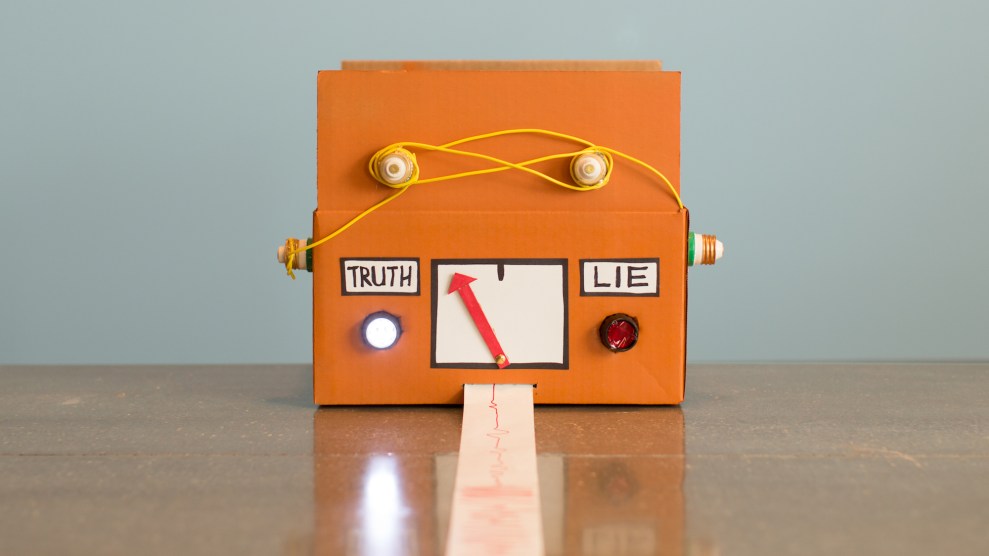 Last Friday, as the two women who have accused Virginia Lt. Gov. Justin Fairfax of sexual assault prepared to go on CBS This Morning and recount their stories to anchor Gayle King, Fairfax was traveling to a Washington, DC, law office to sit down with a very different type of interviewer: polygraph examiner Jerry Hanafin.

Hanafin, a retired FBI agent, had administered a polygraph test last fall to Christine Blasey Ford, who had just accused then-Supreme Court nominee Brett Kavanaugh of assaulting her. Those results appeared to support her case. But this time, with Fairfax, Hanafin was giving the exam to someone on the other side of a sexual violence allegation.

His report, obtained by CBS and published Wednesday, concluded that Fairfax’s physiological indicators—such as perspiration, breathing, and heart rate—were “not indicative of deception” when he denied engaging in “non-consensual sexual activity” with either of his accusers, Vanessa Tyson and Meredith Watson. Fairfax, for his part, seems to have taken the results as an exoneration: “I feel so strongly regarding my innocence that I submitted myself to polygraph tests for each of the accusations against me,” he said in a statement to CBS. “I passed those tests. I did not assault either of my accusers.”

But what does the polygraph exam—a controversial technique whose results are typically not admissible in court—really tell us about Fairfax’s responsibility for the alleged sexual assaults? According to Leonard Saxe, a social psychologist at Brandeis University who has studied the accuracy of polygraphs for decades and led a congressional study on their efficacy in the 1980s, the exam is basically useless in determining if someone is telling the truth. “The test is just not supported by either theory or data,” Saxe argues. “Somebody who lies, maybe they sweat a lot. They may look away, and so on. But the other possibility is also true. If you’re arrested for some serious crime, if your life is on the line, you may be nervous, you may be sweating just because you’re concerned about being truthful.”

That’s the crux of most criticisms of polygraph exams (and there are many): that they measure signs of nervousness, and being nervous can result from any of dozens of indistinguishable factors—guilt, yes, but also fear that another kind of wrongdoing will be discovered, or even anxiety about having to take an exam considered by many to be junk science. “The lie detector is not a lie detector—it’s a fear detector,” Saxe says.

That’s part of the reason sexual assault victim advocates have typically discouraged investigators from asking victims to take polygraphs: The physical reactions that may come along with discussing a traumatic event, like a sexual assault, can produce false indicators that the person being tested is lying, according to the National Sexual Violence Resource Center. It’s also the recommendation of the International Association of Chiefs of Police not to polygraph sexual assault victims, because it can alienate them and destroy their trust in police, lowering the odds of a successful investigation.

But on the other side, lie detector tests are perhaps even more flawed when used on those accused of sexual misconduct. Mary Koss, a public health professor at the University of Arizona who has studied sexual violence for decades, argues that polygraph exams are particularly ineffective in testing the truthfulness of a person accused of sexual assault because “most rapists, even those in prison, do not perceive what they did as rape no matter what others saw.” She adds, “If you truly believe something to be true, even if it is a misperception, you can pass a polygraph.”

“If you truly believe something to be true, even if it is a misperception, you can pass a polygraph.”

Indeed, research shows that most offenders will not admit to “rape” or to “sexual assault,” even at the same time as they cop to behavior that amounts to it. That’s according to Kevin Swartout, a Georgia State professor of psychology, who studies perpetrators of sexual violence and the type of people most likely to commit those crimes. When Swartout surveys men about whether they’ve committed sexual violence, he has to carefully design his questions to account for this problem. “If you were to ask somebody, ‘Did you penetrate someone’s vagina with your penis when they did not want to?’ They might say, ‘Yeah, I did that, when I was in college,’ or whatever.”

But when you ask if they committed rape? As Swartout explains, “They’ll say, ‘Oh, no, no, I’ve never, I’ve never done anything like that.'” Once, he says, when he asked about 350 college men a similar series of questions, about 30 admitted to behavior that the FBI would label rape. But only one person openly said yes, he had committed rape.

The reason boils down to our tendency to give ourselves a pass when we’re evaluating our own behavior, especially compared to others. Labels like “rapist,” Swartout says, “carry a special meaning above and beyond their actual definition. It’s basically the worst thing that you can be labeled.” And the discrepancy between the facts and perpetrators’ self-regard is exacerbated by rape myths—such as the belief that rape is usually a stranger-leaps-out-of-the-bushes situation—that reassure men who have committed sexual violence against a friend or intimate partner that they don’t qualify as a perpetrator.

All of this gets murkier when the behavior in question involves a disagreement over consent, not the actual sexual behavior in question. According to Maia Christopher, executive director of the Association for the Treatment of Sexual Abusers, some perpetrators may claim they didn’t “coerce” or “force” anybody to have sex. “That may very well be true,” she says, but in cases of statutory rape, for instance, “that doesn’t change the fact that’s sexual assault.” Same goes when there’s a lack of affirmative consent.

On the flip side, Dan Sosnowski, a former president of the American Polygraph Association who has been conducting polygraphs for 39 years, vociferously defends the accuracy of polygraphs, even in sexual assault cases—if they’re administered by a good enough examiner. “There’s an art and science of the interview,” he says. “If something really, really happened, it’s written to your memory. It’s written to your hard drive. I just have to give you a way to access that.”

A separate exam question should address the alleged lack of consent, like, “Did you have an express, complicit, consensual agreement?”

He also estimates that about half of the sexual assault criminal defendants he has tested over the years, usually at the behest of their private defense attorneys, maintained their innocence in exams and passed the polygraph. (If they were telling the truth, that would mean his clients experienced an extraordinarily high rate of false criminal sexual assault accusations, which experts estimate happen in just 2 to 8 percent of cases.)

Yet even Sosnowski says there’s not enough information in Hanafin’s report on Fairfax’s polygraph test to say the public should accept its results at face value. Of particular concern, he says, are the length and lack of specificity in the questions asked of Fairfax, including, “Did you engage in any non-consensual sexual activity with Vanessa?” as well as the same question regarding Watson. Fairfax answered “no” in both instances, but those are not useful questions, Sosnowski explains, unless the examiner has clearly defined “sexual activity” beforehand. A separate exam question, he says, should address the alleged lack of consent, like, “Did you have an express, complicit, consensual agreement?” Sosnowski adds, “We have to be very explicit when we cover those issues.”

He also believes other questions asked of Fairfax, such as, “Was Vanessa crying at any time she was in your hotel room?” skirt the heart of the allegations against him, which in this case include alleged forced oral sex in his 2004 Democratic National Convention hotel room. Whether Tyson was crying, he explains, “doesn’t address anything to do with any sexual contact.”

There are other reasons to take a polygraph exam like Fairfax’s with a grain of salt; for instance, people who have been asked repeatedly about a subject will have a more moderate emotional reaction to it, lessening the likelihood that a polygraph will detect an anomaly even if they’re lying, Saxe says.

No matter how you read Fairfax’s polygraph, it’s far from the end of the road for the investigation into his conduct; the lieutenant governor himself is calling for further inquiry into both allegations against him. “Law enforcement authorities in Boston and Durham have demonstrated a sensitivity to those who wish to report a crime,” he suggested in a statement to CBS. “A civil lawsuit as well would provide a forum for assessing the credibility of all parties.” Putting the final determination of guilt in any sexual violence case in the hands of police is far from a perfect solution. Then again, neither is a polygraph. Some polygraph examiners who work with police can successfully use the exam to intimidate suspects into a confession, or into giving up information, according to Saxe. But in determining guilt or innocence, “it’s not useful,” he adds.

That said, polygraphs often have success on a different measure: pushing a favorable narrative with the public. For public figures like Fairfax, Saxe says, “just the fact that they were willing to take a polygraph may suggest to people they have nothing to hide—and they were being truthful.”