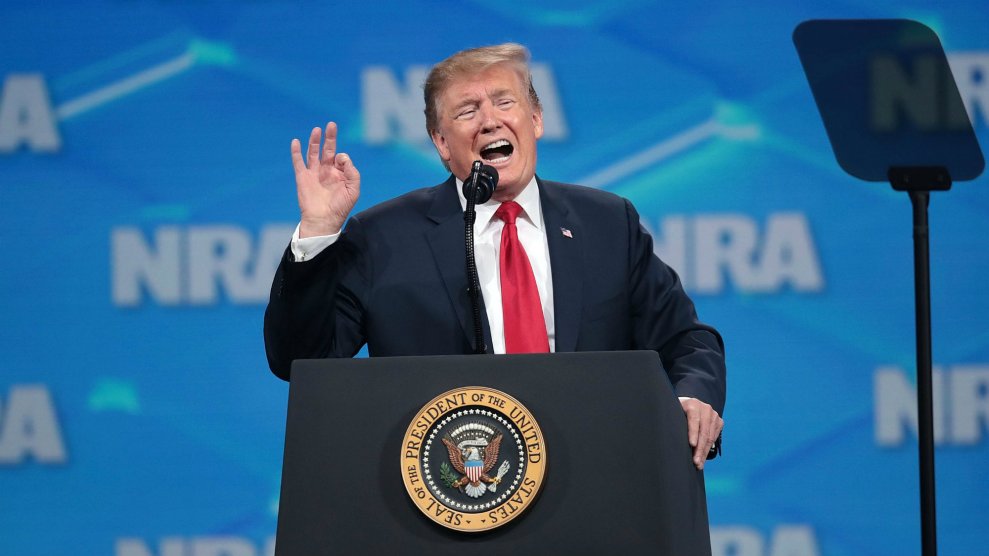 Donald Trump said Friday he would remove the United States from a global arms treaty, the latest example of his administration’s disdain for international agreements and restrictions on weapons sales. His pledge to abandon the “badly misguided” Arms Trade Treaty, which restricts the transfer of weapons to terrorists and other malicious actors outside of the country, drew a standing ovation at the annual National Rifle Association meeting in Indianapolis, where Trump was speaking.

“We will never allow foreign bureaucrats to trample on your Second Amendment freedoms,” he said. “I hope you’re happy.”

Quite a few people were unhappy with Trump’s decision, which he announced less than three months after removing the United States from a Reagan-era arms control treaty with Russia. The Arms Trade Treaty was signed by Secretary of State John Kerry in 2013 with overwhelming support from the international community. Only three countries—Iran, North Korea, and Syria—opposed it.

“THIS IS INSANE,” Alexandra Bell, a former State Department official, said on Twitter. “The whole point of the Arms Trade Treaty is to get the rest of the world to follow American principles on how and when to sell arms. We are pulling out of a treaty that is based on American values.”

“We have effectively removed ourselves from the global conversation about conventional arms transfer.”

On a call with reporters after Trump’s speech, a senior administration official defended the move as a way to shore up the Second Amendment rights of Americans while preserving the ability for the US military to counter China and Russia, two countries that abstained from the treaty and that Washington views as strategic competitors. “This treaty imposes risks but no gains,” the official said. Left unsaid was how ecstatic the pull-out made the NRA, whose leadership has enthusiastically backed Trump and spent millions on his behalf in 2016. The gun rights organization was one of the treaty’s fiercest critics when it was being debated at the United Nations; the group warned that domestic sales of civilian weapons would be affected. Human rights advocates have generally dismissed that fear.

“It’s a complete myth that this treaty has any effect on an American’s access to firearms,” Daryl G. Kimball, executive director of the Arms Control Association in Washington, told Mother Jones. “The Arms Trade Treaty sets requirements for all states to have standards and regulations regarding the import and export of conventional arms consistent with their constitutional laws.”

Among the Trump administration’s stated concerns with the treaty was the possibility that, over time, these standards would become more stringent in a way that disadvantaged the United States at the expense of its rivals. “The ATT is, in effect, an escalator: Once you step onto it, you are no longer in control of your direction of travel,” Theodore Bromund, a senior fellow at the conservative Heritage Foundation, wrote in a piece last year advocating for Trump to un-sign the treaty.

Defenders of the agreement note that, by not participating in the treaty, the US effectively yields its influence in pressuring other states to toughen their arms export standards. “We have effectively removed ourselves from the global conversation about conventional arms transfer,” Kimball said. “That’s clearly not in our interest.”

Unshackling the United States from international agreements has long been a primary goal for John Bolton, the president’s increasingly empowered national security adviser, who once said he “felt like a kid on Christmas Day” when as a George W. Bush administration official he ensured the US would not join the International Criminal Court.

Since joining Trump’s staff last March, Bolton has played a crucial role in sinking the Iran nuclear deal and the Intermediate-Range Nuclear Forces treaty. Evidently no fan of multilateral governance himself, Trump famously withdrew the Paris climate agreement and removed the United States from the UN Human Rights Council.

“The President’s action today is yet another mistaken step that threatens to make the world less safe, rather than more secure,” Thomas Countryman, the lead US negotiator on the Arms Trade Treaty, said in a statement. “It is sad, but to be expected, that this president opposes efforts to require other countries to meet the high standards of US military export decisions.”