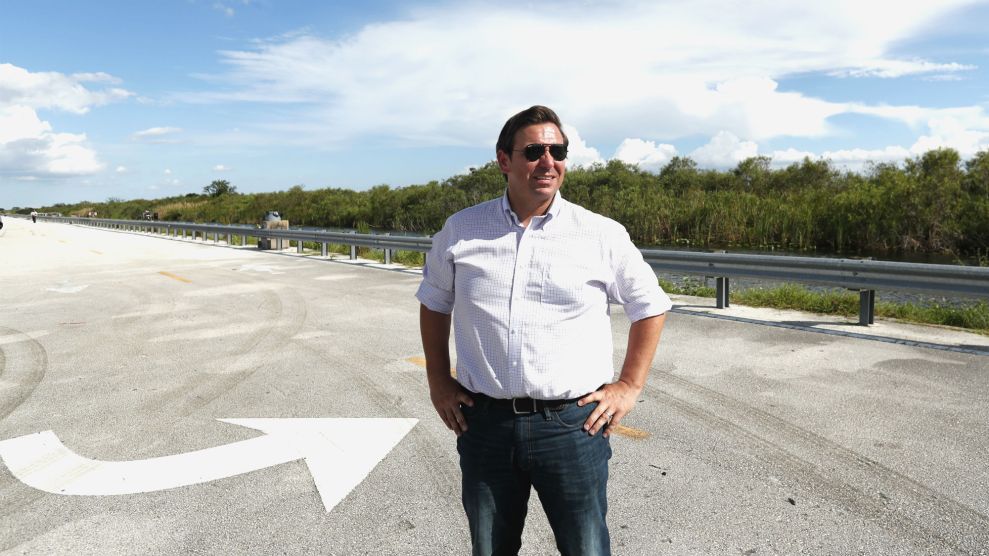 On paper, Ron DeSantis looked like an environmental disaster waiting to happen. During his 2018 campaign to be Florida’s next governor, the Republican candidate dodged questions about whether humans are causing climate change and he became a clear favorite of President Donald Trump. He also offered a less-than-stellar history on environmental issues as a former member of the US House of Representatives: voting to expand US drilling operations and against a carbon tax, and only voting in favor of the environment in four out of a possible 204 times, according to the League of Conservation Voters. Although he claimed that restoring the Florida Everglades was a priority while campaigning, his record prompted state Democrats to label DeSantis a “sham environmentalist.”

So when he pulled off a tight win over Democrat Andrew Gillum in November, progressives in the state didn’t have high expectations.

“He voted against the environment 98 percent of the time. That’s bad, even for a Republican.”

“He had an abysmal voting record in Congress,” Frank Jackalone, director of the Florida chapter of the Sierra Club, tells Mother Jones. “He voted against the environment 98 percent of the time. That’s bad, even for a Republican, considering that he was in Congress for six years.”

But since taking office, the self-described “Teddy Roosevelt conservationist” has been somewhat of a pleasant surprise. Even as his comrades at the national level have pushed for environmental deregulation, imposed budget cuts for environmental programs, and actively censored climate science, DeSantis appears to have broken away from the Republican pack.

Part of the reason may be what’s known as “red tide,” a nasty, toxin-producing algal bloom that can kill fish and other marine life. Leading up to the election, the issue—and the environment more broadly—took center stage on the campaign trail. As my colleague Rebecca Leber reported in September, voters in coastal cities could actually smell the stench of dead fish as they went to the polls. “The devastation of watching floating animals, mammals, and all the snook—we’re talking about epic proportions that we’ve never seen before,” Kimberly Mitchell, executive director of the Everglades Trust, tells Mother Jones.

It was an issue that DeSantis jumped on early. “[Red tide] was clearly something people cared about, and it was a bipartisan thing,” says Jackalone. “It impacts people, whether you live in a Republican area or a Democratic area, it doesn’t matter.”

DeSantis also spent time on the trail openly criticizing the sugar industry, which had been blamed for Florida’s algal blooms, and he refused to accept any donations from it. (All other gubernatorial candidates in the race, except Adam Putnam, DeSantis’ major rival in the Republican primary, also refused sugar donations.) His hardline stance earned DeSantis the endorsement of one major environmental group, the Everglades Trust—the only such organization that supported him.

Still, it was a surprise to many environmentalists when, after the election, he started taking real action on green issues. In an op-ed published in South Florida’s Sun-Sentinel just days before he was set to take the oath of office, DeSantis promised citizens he’d follow through on his campaign pledges, specifically calling attention to the environment: “I will fulfill promises from the campaign trail. That means prioritizing environmental issues, like water quality and cleaning the environmental mess that has resulted in toxic blue-green algae and exacerbated red tide around the state,” he wrote. “We will put Everglades restoration into high gear and make it the reality that Floridians have been promised for three decades.” (The governor’s office did not respond to repeated requests for comment from Mother Jones.)

Then, on January 10, his third day in office, he signed a sweeping executive order calling for:

Notably, the executive order never uses the terms “climate change,” but in ordering the creation of an Office of Resilience and Coastal Protection, it states the office’s purpose is to “help prepare Florida’s coastal communities and habitats for impacts from sea level rise by providing funding, technical assistance and coordination among state, regional and local entities.”

In the few months since issuing the order, the governor has already started to deliver. His suggested $91.3 billion 2019-20 budget, released in late January, called for $625 million for Everglades restoration and clean water projects (including support of the blue-green algae task force), which would put his administration on track to meet the promised $2.5 billion over four years. (It remains to be seen how much money will pass in the budget bills in the state legislature.)

“He’s already done more than was done in the 12 years before him—and he did that in his first week in office.”

And on April 1, DeSantis made news when he finally unveiled his pick for the state’s first chief science officer: Thomas Frazer, director of the University of Florida’s School of Natural Resources and Environment, whose research focuses on freshwater and ocean ecosystems. Frazer does, in fact, believe in global warming, telling the Sun-Sentinel that “climate change is real and humans are responsible for it.” Environmental groups, including the Florida Chapter of the Nature Conservancy, Audubon Florida, and the Everglades Foundation, applauded the decision.

“What has been so remarkable is to see people acknowledge, ‘Oh my God, he wasn’t lying. Oh, my God, what I thought wasn’t actually the case,‘” says Mitchell, of the Everglades Trust. “And he’s doing it. He’s already done more than was done in the 12 years before him—and he did that in his first week in office.”

In addition to the executive order, in a somewhat controversial move, DeSantis asked the entire nine-member board of the South Florida Water Management District to resign in January after it voted—against his wishes—to extend a lease for sugar farmers on land set to be an Everglades reservoir. Dismantling the powerful board—one of five regional water-management boards in the state, which is responsible for regulating water use and permitting in the south of Florida, including in the Everglades—was largely supported by environmental groups, who were against the lease. (Others, particularly the ousted board members, saw it as a rash decision. At a board meeting in February, outgoing members criticized DeSantis, calling his administration’s reasoning for the move “reckless ignorance” and “beyond the pale,” the Miami Herald reported.) By the end of February, DeSantis had nominated eight people to replace the board members, a mix of local leaders, businesspeople, and environmentalists. (One seat remains vacant.)

While collectively his moves mark some progress, DeSantis’ steps forward are still small, at least by the standards of many environmental advocates. But it’s important to consider them in contrast to those of Florida’s previous governor, now-US Senator Rick Scott, who prohibited officials in the Department of Environmental Protection from using the words “climate change” or “global warming” in official communications, cut funding for water management, and loosened toxic pollution standards, among other deregulatory actions. During the November election, he earned the nickname “Red Tide Rick” from voters for the role that his relaxed environmental policies played in exacerbating the red tide that season.

“It’s not that hard to raise the bar when your predecessor has left it on the ground,” Florida Rep. Evan Jenne, a Democrat and a co-sponsor of an anti-fracking bill, tells Mother Jones. “All he had to do was just lift it a little bit and he was going to be a better environmental governor.”

Constituents have largely been satisfied with DeSantis’ efforts, polling shows. According to a Quinnipiac University poll released mid-March, DeSantis has the highest approval rating of any top executive in Florida in the past 10 years, with 59 percent of Floridians approving of his job so far—including 42 percent of Democrats. Part of that success, according to Peter Brown, assistant director of the Quinnipiac University poll, is likely because of his stance on the environment, an issue “on which Republicans often don’t focus,” Brown said in a statement.

Surprisingly, even the influential Florida Farm Bureau, the state’s largest farm advocacy group, isn’t vocally opposed to DeSantis’ environmental plans. Charles Shinn, director of government and community affairs at the organization, tells Mother Jones the sugar industry alone is not at fault for the algal blooms, and that DeSantis is “uninformed” about the issue. But he says he is “optimistic” about the governor’s environmental plan: “The goals that he set out basically, from day two of his administration, are our goals that we as agriculturalists in the state of Florida are also trying to achieve.” (While many researchers say agricultural runoff contributes to the intensity of red tide, there isn’t a scientific consensus on whether there is a direct cause-and-effect relationship between farming activity and the toxic algal blooms.)

“It’s not that hard to raise the bar when your predecessor has left it on the ground.”

When I asked Shinn how he thinks DeSantis will compare to Scott, he said it’s “like comparing apples and oranges.” The biggest difference is that with Scott, “you kind of knew where he was going to go on particular issues,” says Shinn, but with DeSantis, it’s “a whole new playing field.”

“It’s not a bad thing,” he says. “It’s just different. It’s new. And so we’re trying to figure out, okay, exactly where does this administration sit on different issues?”

If nothing else, DeSantis has proven that a Republican governor can take steps to tackle environmental, even climate issues, and still maintain high marks from constituents—and other governors of both parties should take note, Mitchell says. “Here’s the great lesson for Republicans and Democrats: Be mindful of the other. You have to,” she says. “To think in an echo chamber is not to govern. It might get you elected, but it’s not to govern.”

While they are hopeful, both Jackalone and Jenne say “the jury is still out” on their new governor. And at just three months into his term, it’s unclear if all of DeSantis’ Everglades funding will come, what specific projects will get the money they need, if he’ll directly tackle the causes of climate change, and what his final environmental legacy will be.

His willingness to sign on to progressive environmental legislation will be a real test for DeSantis, Jenne says.

“I’ve heard plenty of words from plenty of politicians in this state. But right now, that’s all they are,” he says. “As we move through our legislative process, we’re going to see what type of governor he actually is.”