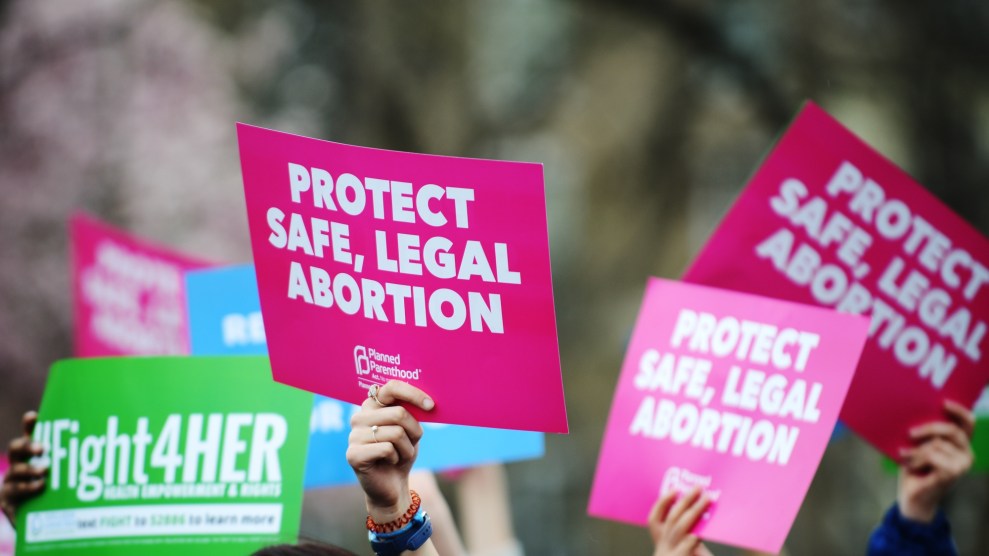 People attend a pro-choice rally in front of the White House on March 29, 2019.Astrid Riecken/Getty Images

Ohio lawmakers have long tried to make it impossible for women to get an abortion there. The state has restricted abortion in a number of ways, including with a ban on a common abortion method and a law that requires women seeking abortions to receive ultrasounds first. Legislators are currently considering a bill that would effectively prohibit abortions as early as six weeks from conception—one of the most restrictive abortion laws in the nation.

This year, Ohio lawmakers have found a new strategy to chip away at abortion access: blocking state funding for Planned Parenthood. In late March, the Cleveland Plain Dealer reported, the Ohio Department of Health began notifying Planned Parenthood clinics that the funding they receive from the state would run out April 20.

Last year, the state Department of Health gave out $600,000 in grants to Planned Parenthood clinics across Ohio. The use of public funds to pay for abortions is already banned except in cases of life endangerment, rape, and incest, so that money went to things including sex education efforts, services for sexual assault survivors, sexually transmitted infection testing, and breast and cervical cancer prevention.

Anti-abortion politicians have for decades tried to limit public funding for Planned Parenthood and other abortion providers, with varying degrees of success. In 1976, Congress blocked the use of federal Medicaid dollars for abortions except in rare circumstances, and many states followed suit, passing laws blocking their state Medicaid money from funding abortions directly. After the Affordable Care Act passed in 2010, states targeted the private insurance marketplace with laws banning abortion coverage. Eighteen states have laws on the books limiting public funding for abortions.

Not all of these efforts have been successful. Amid the release of undercover videos by the Center for Medical Progress, an anti-abortion group, some states tried to take their bans on Medicaid funding for abortion a step further and cut all Medicaid funding to Planned Parenthood. In 2015, the Obama administration notified two of those states that cutting Medicaid funding to the organization might violate federal law. And in December, the Supreme Court declined to hear a case brought by Kansas and Louisiana seeking to block Medicaid funding for non-abortion-related services.

Now, Ohio may have hit on the next tactic for weakening access to abortion. The effort started in early 2016, when Ohio lawmakers passed a bill allowing the state to block funding for Planned Parenthood. So far, it’s gotten some positive response from the courts: In March, a federal appeals court upheld the law after it was struck down by a three-judge appeals court panel in August. The Department of Health’s notices to the reproductive health organization were issued shortly after.

New rules from the Trump administration, which go into effect next month, will strip tens of millions of Title X federal family planning dollars from Planned Parenthood and impose stringent regulations on clinics that offer abortion services, like requiring abortions to be performed at different facilities than where Title X programs are administered. The rule will effectively “gag” Title X health care providers by barring them from telling patients how to obtain abortions. The move is likely to be challenged in court, but Planned Parenthood is already bracing for the so-called gag rule, calling it “one of the most dangerous and unconscionable attacks on our health and rights we’ve seen yet.”

Ohio “could be a harbinger” of restrictions we’ll see elsewhere, says Elizabeth Nash, senior state issues manager at the Guttmacher Institute, a reproductive rights think tank. “When it comes to restricting dollars to Planned Parenthood, Ohio always seems to be on the cutting edge. It is the state you would look to if you wanted to find ways to keep Planned Parenthood out of public coffers.”

The move isn’t without precedent: In 2015, the Utah health department tried to withhold state funds from Planned Parenthood (it was later stopped by a federal judge), and a similar effort by Indiana in 2012 was successful.

To deal with the impending budget cuts, Planned Parenthood clinics in Ohio are reaching out to donors. Although there aren’t plans to close clinics yet, they’re preparing for a long battle, says Kersha Deibel, president and CEO of Planned Parenthood Southwest Ohio. Three of the 26 Ohio Planned Parenthood locations offer abortion services and already receive no state funding, so would not be directly affected by the new restrictions. In a statement to the Plain Dealer, Planned Parenthood of Greater Ohio CEO Iris Harvey said the cuts would “gravely impact patients and communities across Ohio.”

“Anti-abortion politicians are really eager to make Ohio the most hostile state for abortion rights,” Deibel says. “It’s all part of a larger strategy to ban abortion access, full stop.”

It remains to be seen whether other states will take a cue from the Trump administration’s Title X cuts and Ohio’s notices and push through their own defunding measures. According to Nash, lawmakers may leave it up to the federal government’s Title X cuts to shutter clinics in their states. But there’s also a chance that the cuts coming from the White House will embolden state lawmakers to try the same with their funding. And as state legislatures begin crafting their budgets this spring, Nash says, they might take a page from Ohio’s playbook.

“This could be make-it-or-break-it for clinics,” Nash says. “I would not be surprised to see a bunch of clinics close.”