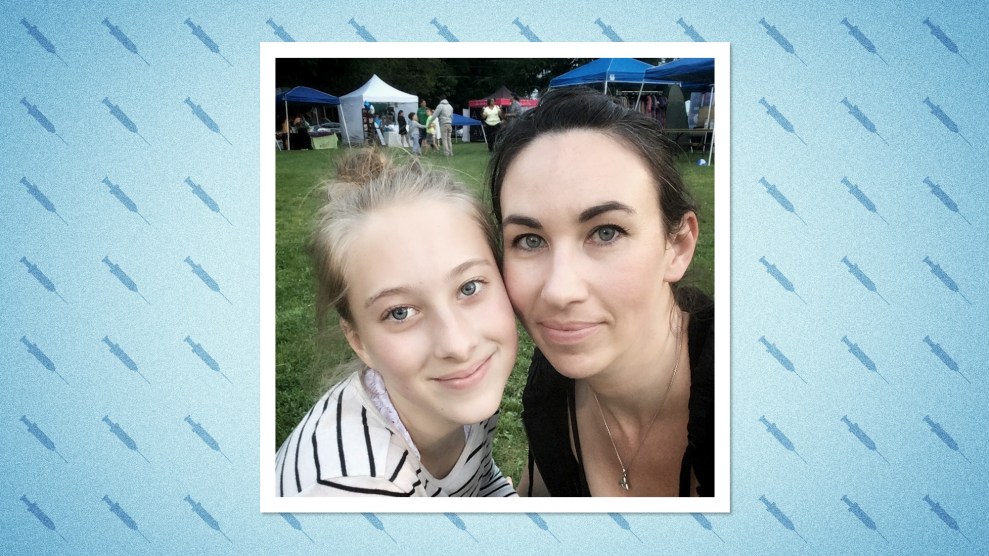 Earlier this year, we asked Mother Jones readers about their vaccination secrets, following the story of 18-year-old Ethan Lindenberger, who recently got vaccinated against his mother’s wishes. Melissa Wilcox, a mother of two in Tacoma, Washington, responded with a story about how she got her daughter vaccinated without telling her daughter’s biological father. Exploring how growing up in rural Montana influenced her beliefs, Melissa also details how her views have evolved. Mother Jones spoke to her over the course of two phone interviews. This conversation has been edited and condensed for clarity.

My parents had a good decade of time between the first batch of kids and the second. During that time, my father caught on to different conspiracies: It started with these religious circles, back in the mid-’70s—“the world’s going to end,” Satanic Panic—and it kept going from there. It’s also why they started homeschooling us.

I remember when we weren’t allowed to watch TV anymore, and that happened when I was maybe five or six. We used to watch The Jetsons and The Flintstones on Saturday mornings, and then all of a sudden it wasn’t okay anymore. I wasn’t allowed to play with Barbies. I remember this book that said Satanists were behind these children’s television shows and they were using these cartoons to talk to your kids. It was an odd cocktail of bad ideas.

When I had my daughter, I decided not to vaccinate her. It was like, “Yeah, we won’t do this because the government is trying to kill our children.”

My older brother and I were vaccinated normally, as was the law in the ’80s. When the second batch of kids were born, my parents decided to not get them vaccinated. I was about eight and then eleven when my younger sisters were born, so I really didn’t think much about it until my later teens in the ’90s.

When I had my daughter, I decided not to vaccinate her. And my ex-husband—her father—was of the same mind. So it was like, “Yeah, we won’t do this, because the government is trying to kill our children.”

I left my now ex-husband, and I was a single mom for a while. I naturally continued to think in line with how I was brought up, and I was leaning on my dad for help. Your parents, you look up to them, they’re superheroes—until you realize they’re people too. As I entered adulthood, I began to realize that my parents weren’t thinking critically, and that led me to question myself a lot, which was—and is—terrifying. I started to question the things I believed in. I’d start to think, well, I’ll call Mom and Dad. They’ll know what to do. And then I’d realize: Can I talk to them about this problem? If not them, then who? It took time to work that out.

My parents were never actually that insane. We lived in rural Montana. There were people with bunkers and food stored for the “end of times.” For a while we raised animals, had a huge garden—and my parents were self-employed. It’s a very independent mindset, but it also feels as if you know everyone.

Out of all that independence comes a very beautiful community. When someone is in need, someone else pops out of the woodwork to help. And yet, as trusting of each other as everyone is, there’s an underlying fear of trusting the government. It’s this mindset that if you can teach yourself, that’s the best thing you can do. You don’t depend on others to educate you. That’s how I fell into that type of thinking.

One day she asked if she was vaccinated, and I said, “No, you’re not. Do you want to be?”

When my daughter was in sixth grade, she read a textbook about the history of modern medicine. She devoured it. She would tell me about all these vaccines and how they came up with penicillin, how they did this and that. As my daughter was reading about vaccines, she would chat with her stepdad. He showed her where he got the smallpox vaccine—during his time in the military—and told her about all the others he’s had to get.

The nurse comes in with the shots. My daughter is this petite 13-year-old, and the nurse goes right ahead and starts vaccinating my kid. Done.

For most people who have trouble believing in the science of vaccinations, it’s an emotional reasoning, which is incredibly difficult to change.

We didn’t tell her biological father, and he still doesn’t know. I let my daughter make her own decisions, and she wanted this. Now I take her every August to get our flu shot at Target. We get a $5 gift card for doing it.

For most people who have trouble believing in the science of vaccinations, it’s an emotional reasoning, which is incredibly difficult to change. Facts don’t always win. If people don’t want to believe it, they’re not going to believe it.

There’s certain people I can talk to about this in my family, like my younger sister who got herself and her kids vaccinated. My other sister, I think she’s still on the fence. She’s starting to think for herself, starting to part from what our parents think. In California they have a medical exemption, and that’s where my other sister lives. In order to keep her kids in school unvaccinated, she goes to a naturopath—talk about a loophole. [Editor’s note: This is a fairly common practice in California, where parents can only opt out of vaccines for medical reasons.]

For me, I came around for many reasons. My now husband, friends—they talked to me and conversed with me. I can only speak from my own experience, but it’s those conversations with people I respect and adore—and living outside the bunker, end-of-the-world thinking—that changed my mind.

My advice to others is don’t be afraid to look at information that you might not agree with. The mind and the heart are never something that should be set in stone.

Mother Jones wants to hear from you. Do you have a similar story about vaccinations to share? Are you a parent who vaccinated your child without telling your partner? Or are you a young person who’s gotten vaccinated without your parents’ knowledge or permission? Let us know in the form below, send an email to talk@motherjones.com, or leave us a voicemail at (510) 519-MOJO. We understand this is a sensitive issue and will respect your privacy.