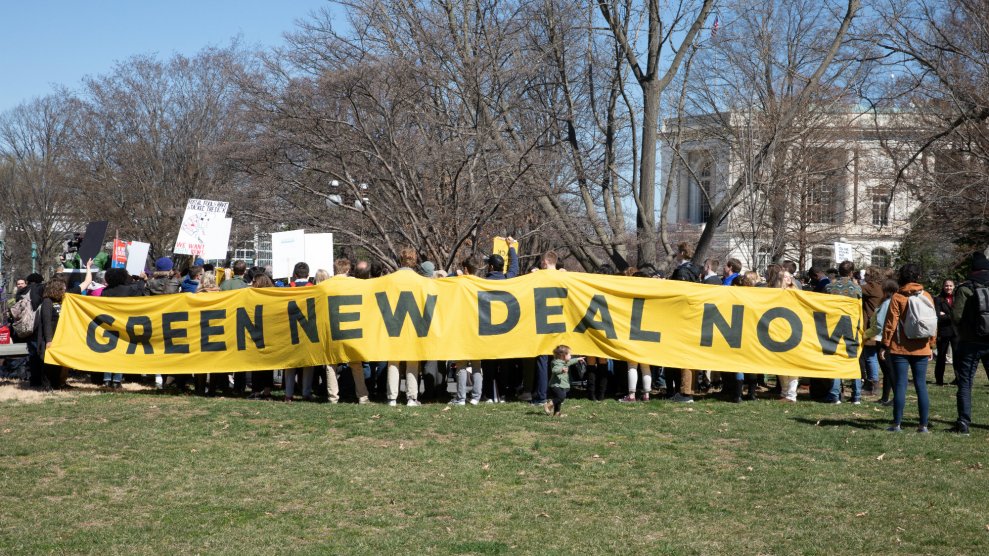 The Green New Deal and its proponents aim to tackle the intertwined issues of social and environmental justice in our age of anthropogenic climate change. To accomplish this, they believe they must deploy the federal government, since it is the only institution large enough to coordinate and invest in the necessary policies. But the idea of expanding the role of government has attracted critics, who rail against socialism. To historians, this sounds familiar.

This is not the first time socialism, new deals and the environment have intersected. During the catastrophe of the Great Depression of the 1930s, the federal government similarly attempted to ameliorate social and environmental harms by investing in people and places through the New Deal. Then, as now, critics dismissed it as socialism.

The “socialist” sobriquet stokes ideological fires but douses historical understanding. One prominent example—Bob Marshall’s argument for nationalizing forests during the 1930s—reveals how socialist solutions emerge from specific contexts and problems, not ideological bunkers. In Marshall’s case, the dire state of private timberlands in the early 20th century prompted his call for reform. When massive problems develop, cross jurisdictional lines and are associated with market failures, big government responses can seem like the only possible solution.

By the early 20th century, hundreds of years of unregulated cutting had ravaged the nation’s forests, and Americans faced a crisis that demanded intervention. “Rocks and mountains may be ageless, but men and society are emphatically of the present, and they cannot wait for the slow process of nature to retrieve the catastrophe caused by their unthinking destructiveness,” wrote Marshall, a forester for federal agencies throughout his career, a co-founder of The Wilderness Society and the person for whom Montana’s Bob Marshall Wilderness Area is named.

A massive evaluation of American forestry conducted by the Forest Service in 1932 both shaped and reflected Marshall’s views. Appearing the next year, A National Plan for American Forestry, known as the Copeland Report, showed that private forests were failing. (The majority of the nation’s timber came from privately held forests, just as it does today.) They burned more often, were not harvested to provide a “continual crop of timber,” failed to protect watersheds and offered few recreational opportunities compared to public forests. They caused social problems, too, with lumber workers doing dangerous, transient jobs that resulted in mangled bodies and left hollowed-out towns behind. As Marshall saw it, “The private owner is thus responsible for almost every serious forest problem.”

So, Marshall argued that American timberlands should be publicly owned. In 1933, four years into the Depression and during the first year of Franklin D. Roosevelt’s presidency, Marshall published The People’s Forests, his own radical extension of the Copeland Report, which advocated for public ownership of practically all commercial forests in America. He was writing amid an economic catastrophe mirrored in the nation’s wild and rural landscapes, where bankrupted farmers, out-of-work loggers and drought-driven refugees were common, not unlike today.

Throughout The People’s Forests, Marshall showed how private ownership, even when tempered by public regulation, fell short; only full public ownership could keep forests and communities healthy. He united a biological and social vision for forestry, one where human happiness and decent livelihoods might sprout from robust forests. In articulating that vision, he made his socialist case plain: “The fundamental advantage of public ownership of forests over private ownership is that in the former social welfare is substituted for private gain as the major objective of management.” Much the way today’s Green New Deal seeks to redress both economic and environmental impoverishment, Marshall sought to replace private profit with a broader public spiritedness that aimed for long-term stability, ending cut-and-run practices and ultimately strengthening communities.

Marshall’s call for reforms reflected an accelerating trend of expanding public lands in the 1930s, when the federal government acquired millions of acres for national parks, national forests and wildlife refuges. Newly passed laws, like the Migratory Bird Hunting Stamp Act (1934) and the Bankhead-Jones Farm Tenant Act (1937), helped the government fund refuges, acquire property for conservation and bail out private owners who lived on wrecked lands. Starting around the same time and lasting until the 1950s, Forest Service administrators advocated for public regulation of logging on private land, principally citing concerns about declining timber production and the threat of fire on poorly managed parcels. Though ultimately unsuccessful, those efforts illustrated a push to establish stability amid unsettling crisis, a goal Marshall shared.

When capitalism stumbles badly, producing degraded lands and gaping inequalities, socialistic solutions rise in popularity, because their incentives are not tied to profits. Marshall’s closing line argues for that perspective: “The time has come when we must discard the unsocial view that our woods are the lumbermen’s and substitute the broader ideal that every acre of woodland in the country is rightly a part of the people’s forests.” Shouting “socialist” as an epithet is a tired strategy, a failure to reckon with specific contexts and problems, whether it’s damaged timberlands in the 1930s or rising sea levels today. The People’s Forests and the Green New Deal highlight the ways social and environmental harms are woven together, a reminder that real solutions require a mutual untangling, and that — despite American history and politics’ suspicion of true socialism — government necessarily holds many of the threads.