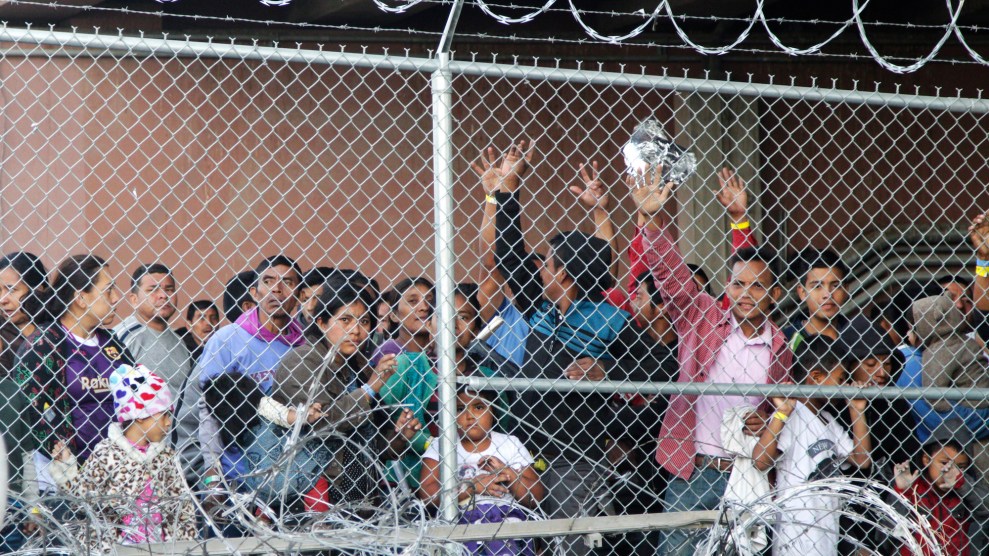 Central American migrants wait in El Paso on Wednesday in a pen built by US Customs and Border Protection.Cedar Attanasio/AP

US Customs and Border Protection Commissioner Kevin McAleenan warned earlier this month that US border infrastructure was approaching a breaking point as record numbers of families arrived at the border. Speaking in El Paso on Wednesday, McAleenan announced, “That breaking point has arrived this week.”

President Donald Trump’s ceaseless lies about immigration can make it easy to assume that anything the administration says about the border is hyperbolic. But McAleenan is right that the increase in the number of families crossing the border is unprecedented. The data back him up.

In March 2013, Border Patrol agents took 1,310 family members into custody. This month, according to CBP, they are on track to stop 51,844—a 40-fold increase. Last year, Border Patrol agents took a record 107,212 family members into custody. This year, they’re on pace to detain nearly 190,000 in just the first six months of the fiscal year.

America’s border security infrastructure was built up, starting in the late 1980s, to stop Mexican adults coming to the United States for work and then quickly deport them. It is not equipped to process, much less detain, such large numbers of families. Border officials have known for years that Central American families and unaccompanied children seeking asylum were taking the place of Mexican migrants, but they have continued to focus on deterrence rather than creating alternatives to immigration detention and expanding capacity to evaluate asylum claims. That has led to years-long backlogs in immigration courts, which can give migrants an incentive to file weak asylum claims and then live and work in the United States while their cases are pending, or not apply at all and become undocumented. The many asylum-seekers with strong cases wait years to gain protection and the accompanying permission to bring relatives to the United States.

The perception that the border is relatively open to families and children is likely leading more migrants to take advantage of what could prove to be a limited window. Combined with new and faster bus-based routes to the border operated by human traffickers, the result has been a level of family-based migration that would have been unthinkable even a few months ago. Apprehensions of single adults, meanwhile, remain far below the levels reached in previous decades.

CBP would likely be struggling to deal with the current influx even if it had done a better job preparing. McAleenan said his agency had 13,400 migrants in custody on Wednesday. “A high number is 4,000,” he explained. “Six thousand is crisis level. Thirteen thousand is unprecedented.” McAleenan added that more than 4,000 migrants were stopped by Border Patrol agents on Monday, the highest one-day total in more than a decade. That total was surpassed again on Tuesday, when 4,117 people were taken into custody.

The increase in family migration has affected some areas of the border much more than others. Compared to the same period last year, there has been a 1,689 percent increase in families taken into custody in the Border Patrol’s El Paso sector. In Tuscon and Yuma, there have been (relatively) smaller increases of about 230 percent.

CBP could greatly ameliorate the humanitarian crisis by processing more asylum-seekers through the official ports of entry along the border where many asylum-seekers line up every day. But it has implemented strict daily caps on the number of people allowed through each of these border crossings as part of its failed effort to deter people from requesting protection. The long waits push asylum-seekers to cross the border between ports of entry, without authorization, and then seek out Border Patrol agents to make their asylum claims. The Border Patrol agents then have to take them into custody instead of doing their usual jobs: looking for adult border-crossers who are trying to evade capture.

The Trump administration has an interest in bolstering the crisis narrative to get Democrats to back its deterrence agenda, or to allow Trump to blame Democrats as he campaigns for reelection. That puts its top immigration officials in the strange position of essentially advertising to migrants that CBP has no power to stop them if they arrive with a child. McAleenan made that clear on Wednesday. Central American families, McAleenan said, “cannot be repatriated expeditiously, and instead are almost guaranteed to be released to remain in the US indefinitely regardless of the merits of their immigration or asylum claim.” He’s not wrong, and it’s proving to be a powerful draw.