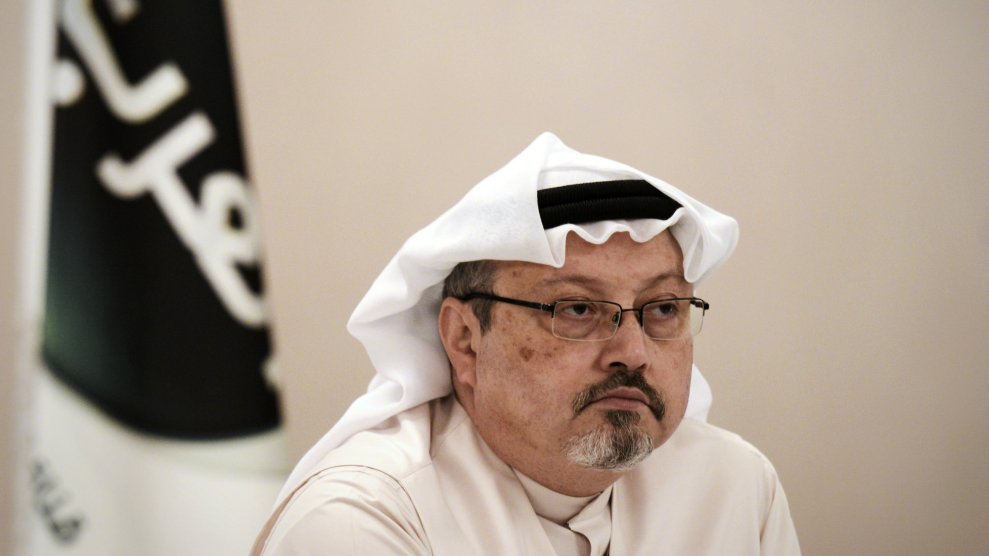 Five months after the disappearance of Washington Post journalist Jamal Khashoggi, the international community, Congress, and even the CIA have all concluded that Saudi Arabia Crown Prince Mohamed bin Salman ordered his assassination. Only President Donald Trump and his senior advisers have been unwilling at this point to blame him directly and follow through with any reprisals. “It could very well be that the Crown Prince had knowledge of this tragic event—maybe he did and maybe he didn’t!” Trump said in a statement issued in November.

That explanation has not satisfied lawmakers on Capitol Hill, who have repeatedly criticized the administration’s handling of the killing of a journalist who worked for an American news organization. They have asked to be briefed on the administration’s findings, and that briefing finally occurred Monday. On Tuesday, Sen. Chris Murphy (D-Conn.), a member of the foreign relations committee, slammed the administration officials for including “no information not already on the record.”

1/ THREAD: Here’s what happened yesterday in our “classified” Khashoggi briefing that included no information not already on the record.

According to a copy of the committee’s weekly schedule, the meeting was intended to provide lawmakers with an update on the administration’s progress under the Global Magnitsky Act, which requires the White House to assess by congressional request whether a foreign national violated human rights. Lawmakers invoked the Obama-era legislation after Khashoggi’s killing, which triggered a four-month deadline for Trump to respond.

Instead of meeting the deadline, Secretary of State Mike Pompeo wrote a letter to Bob Menendez, the top Democrat on the foreign relations panel, that highlighted the administration’s prior decision to sanction Saudi Arabians connected to Khashoggi’s killing, but that failed to mention MBS. “Your letter exacerbates the fears that this administration continues to hide something when it comes to the murder of Mr. Khashoggi,” Menendez responded days later.

“Your letter exacerbates the fears that this administration continues to hide something when it comes to the murder of Mr. Khashoggi.”

The two briefers were the State Department’s acting undersecretary for economic growth, energy, and the environment and the Treasury Department’s director of the Office of Foreign Assets Control. “We have imposed visa restrictions and financial sanctions against those connected with the killing of Jamal Khashoggi,” a State Department spokesperson told Mother Jones in an emailed statement. “If additional facts come to light, we will consider further measures.” The Treasury Department did not respond to a request for comment.

The information provided by the briefers did not appear to persuade any skeptical lawmakers of the administration’s sincerity.

“Trump Administration briefers DID confirm that they have no plans to comply with the Magnitsky Act and verify whether of not they believe MBS was involved, as required by the law,” Murphy tweeted. When asked for clarification, Murphy spokeswoman Laura Maloney told Mother Jones that the briefers said the administration “has submitted all they are planning to submit.” Mitt Romney, a Republican member of the committee, told Politico on Monday night that “we learned very little” from the briefing.

A spokesperson for Sen. James Risch (R-Idaho), the committee chair, did not respond to a request for comment.

“No high level Treasury or State Dept official was there,” Murphy said. “No intelligence official was there, making it impossible to have any real conversation about what the Administration knows about MBS involvement in Khashoggi murder.”

Khashoggi, an opinion writer whose Washington Post columns harshly criticized repressive measures taken by the Saudi monarchy, went missing in October after entering the Saudi consulate in Istanbul to retrieve paperwork he needed in order to get married. Various MBS associates were spotted around the consulate that day, including a Saudi intelligence officer believed to be one of the crown prince’s bodyguards. After initially claiming that Khashoggi was alive, the kingdom later changed its story to say he died in a “fistfight” within the consulate. Eighteen Saudis were eventually arrested in connection with the slaying. In yet another shift to the kingdom’s official narrative, a Saudi prosecutor claimed in November that Khashoggi was killed by a lone intelligence agent who made a rash decision.

The CIA concluded with “high confidence” that MBS ordered the killing, according to a report in the Post.

The murder escalated tensions between the United States and Saudi Arabia, whose decadeslong alliance has centered around the kingdom’s bountiful supply of oil and willingness to buy American weapons—a reality Trump frankly acknowledged in his lengthy statement defending Saudi Arabia, the scene of his first trip abroad as president. “After my heavily negotiated trip to Saudi Arabia last year, the Kingdom agreed to spend and invest $450 billion in the United States,” Trump said. “This is a record amount of money.” Congress has thrown a wrench in that relationship by pressuring the White House to relinquish support for the Saudis’ much-maligned war in Yemen, which has become the worst humanitarian catastrophe in the world. Last month, the House voted to end US support for the war and the Senate is expected to pass a similar measure within a few weeks.

If Murphy is to be believed, Trump has yet to hear the last word from Congress on Khashoggi too.

“No meaningful partisan disagreement on what to do next,” he said. “If White House is committed to violating the law and won’t hold Saudis accountable, then the Senate Foreign Relations Committee needs to respond. Talk beginning on sanctions bill that can get R and D support.”