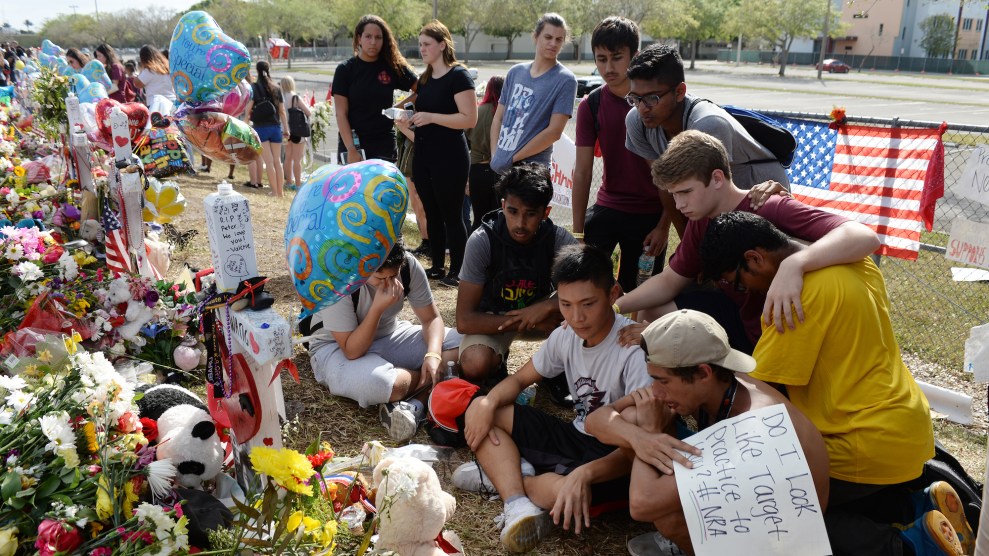 On Monday morning, news broke that Jeremy Richman, the father of one of the 20 children killed in the 2012 Sandy Hook massacre, had been found dead in an apparent suicide. His death came on the heels of similar tragedies in another town well acquainted with school shootings: Last week, two student survivors of the 2018 massacre at Marjory Stoneman Douglas High School in Parkland, Florida, also took their own lives.

The cluster of losses drew comparisons to the years that followed the 1999 murders at Columbine High School in Colorado, when a parent and a student survivor also took their own lives. The deaths raise questions about the lingering trauma that mass shootings have on the communities affected by them.

If you or someone you care about may be at risk of suicide, call the National Suicide Prevention Lifeline, a free, 24/7 service that offers support, information, and local resources: 1-800-273-TALK (8255).

Researchers haven’t established a direct link between mass shootings and the likelihood of the suicides, but they have found connections between the trauma of those events and the mental health risk factors that can lead to suicide. A 2017 meta-study of research conducted in the wake of 15 mass shootings found that the survivors and community members affected by the violence showed signs of post traumatic stress disorder and depression, two prime risk factors for suicide. Those with the closest proximity to a shooting—a survivor or a family member who lost a loved one—are at greater risk for persistent, long-term mental health issues.

There’s also an increased prevalence of “survivors guilt,” says Dr. Kelly Posner, a professor of psychiatry at Columbia University who studies suicide prevention. “There are a lot of distorted beliefs related to survivor’s guilt, like perceived responsibility and perceived preventability—the notion that someone could have done something to stop it,” Posner explains. “It’s long been connected to PTSD.”

“Everyone’s suffering from post-traumatic stress, and these kids and teachers have been through a very traumatic experience—some would call it akin to war zone.”

These consequences aren’t limited to mass shootings, either, says Daniel Webster, the director of the Center for Gun Policy and Research at Johns Hopkins University. His recent congressional testimony in support of federal funding for gun violence research emphasized that “countless individuals” have been “mentally [scarred] by their own victimization with a firearm or by witnessing others who have been shot”—something that’s true in Sandy Hook and Parkland, but also in places that experience everyday gun violence, such as Baltimore or Chicago. “Even if it doesn’t lead to suicide, fear and trauma in the community are rampant,” Webster says.

The best way to combat those symptoms, says Posner, is through early identification. She’s the lead developer of the Columbia Protocol, a short, plain-language suicide risk assessment that gauges someone’s likelihood of committing suicide. Over the past year, she’s worked with Ryan Petty, the father of one of the students killed at Stoneman Douglas, to teach the protocol to the Parkland community in an effort to identify those who might be suffering from the trauma of the shooting.

Petty says that the risk of suicides has been a chief concern of his since the massacre that took his daughter’s life. Over the last year, he notes, there’s been a substantial effort to help connect people with the resources they need. But he worries that some of those resources—especially those that have been promoted by the school district—might be misplaced. He argues that an emphasis on identifying at-risk students and utilizing specialized trauma therapies is the most effective pathway for helping the shooting’s survivors.

“Everyone’s suffering from post-traumatic stress, and these kids and teachers have been through a very traumatic experience—some would call it akin to war zone,” Petty says. “You have to deal with the trauma before you can move on the counseling to the other types of therapies—for depression, anxiety, and survivors guilt—to be effective.”

That can be a challenge. According to a 2009 ABC News retrospective on the massacre, few survivors sought out the PTSD counseling that was made available to survivors, but one who did said it saved his life. Dr. Frank Ochberg, a former FBI psychologist who worked with the counseling teams at Columbine after the tragedy, agrees that treating PTSD must be a priority for survivors. “That’s the singular thing about PTSD: Your brain, when you don’t want to, returns you to the scene of a traumatic event,” Ochberg says. “You have to care about the possibility of triggering them into a flashback.”

Ochberg says that identifying whether a person is having suicidal thoughts is key to intervening and preventing self-harm, adding that having trusted teachers or other “indigenous sources of comfort” across the community can make a big difference in identifying as many at-risk people as possible.

“When I went to Columbine, I asked, ‘Who of the faculty or administrators do you trust?’” he recalls of his work there. “When it comes to preventing suicide or homicide, you want to make sure you have the right adult who’s able to listen without losing their credibility as a safe resource.”

Of great concern to Ochberg is the risk of contagion, the increased risk of suicide that follows from suicide incidents—something that is particularly pronounced among teenagers. That’s Petty’s greatest worry, as well. “Right now, we’re triaging a very real possibility of those who might hurt themselves,” Petty says, explaining that he and his allies are focused on raising awareness with parents and school staff. “We’re triaging what we hope is not a cluster effect of suicides.”