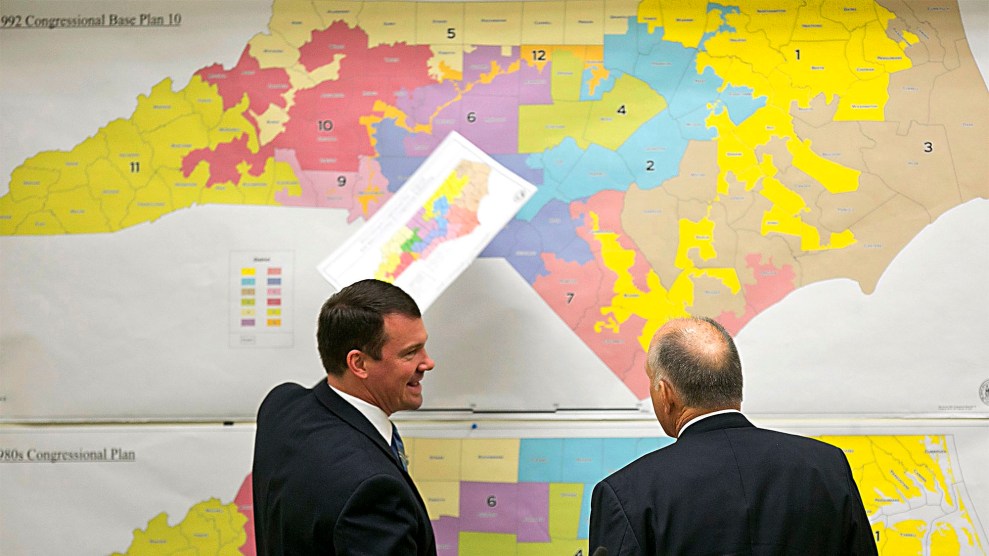 In 2016, after the Republican-controlled North Carolina legislature drew maps that segregated black voters into heavily majority-minority districts, a federal court ruled that two of the states’s congressional districts were illegally racially gerrymandered. When Republicans redrew the congressional maps, legislative leaders openly admitted their top goal was to maintain a partisan advantage. “I propose that we draw the maps to give a partisan advantage to 10 Republicans and three Democrats, because I do not believe it’s possible to draw a map with 11 Republicans and two Democrats,” said GOP state Rep. David Lewis, who oversaw the redistricting process. He conceded: “I acknowledge freely that this would be a political gerrymander, which is not against the law.”

The question now is whether Lewis was right.

A federal court struck down Lewis’ map in August 2018, finding that the legislature “drew and enacted the 2016 Plan with a predominant intent to subordinate the interests of non-Republican voters and entrench Republican control of North Carolina’s congressional delegation.” On Tuesday, the Supreme Court will weigh in, when it hears two major gerrymandering cases: the North Carolina one, Rucho v. Common, and one from Maryland, Lamone v. Benisek.

This is likely the court’s last chance to rule on gerrymandering before the 2020 elections and the next redistricting cycle in 2021. It could finally strike down extreme partisan maps like the ones in North Carolina—or the court’s five conservative justices could make it next to impossible to challenge similar gerrymanders in the future. Control of Congress and critical state legislative chambers for the next decade could depend on the court’s rulings.

Just look at what happened in the 2018 midterm elections. Democratic candidates for Congress won 49 percent of the vote in North Carolina, but Republicans retained nine of 12 House seats. (The 13th seat, in the state’s 9th Congressional District, remains unfilled after the result was vacated due to election fraud that benefited the GOP candidate.) That’s because North Carolina’s congressional maps were more skewed toward Republicans than those of any other swing state, according to an Associated Press analysis.

After the 2010 midterm elections gave them a majority in the state legislature, North Carolina Republicans oversaw the redistricting process and surgically limited Democratic representation. That pattern played out across the country, since Republicans had full control of the state government—and by extension the redistricting process for state legislative and US House seats—in 21 states, compared with eight states for Democrats. In the November 2018 midterms, those maps allowed Republicans to hold onto 16 House seats and seven state legislative chambers than they would have lost under neutral maps, according to the AP. Republican gerrymandering kept the blue wave from turning into a tsunami.

Now North Carolina’s Republican legislative leaders don’t just want the court to rule in their favor; they want it to give a green light to all partisan gerrymandering efforts in advance of the next redistricting cycle in 2021. “Courts simply do not have any business making value-laden judgments about how much politics is too much in a process that will never be free of politics,” the leaders of the state’s Republican-controlled legislature argue in their brief. “This Court should declare partisan gerrymandering claims nonjusticiable once and for all and put an end to the effort to reassign the inherently political task of districting to the federal courts.”

Two years ago, voting rights advocates were hopeful that the court would finally strike down partisan gerrymandering in a landmark case from Wisconsin. But the court punted, refusing to decide the merits of the case, and after Justice Brett Kavanaugh replaced Anthony Kennedy—who in the past had expressed an openness to ruling against gerrymandering—voting rights groups are concerned that the court’s conservative majority will definitively legalize partisan gerrymandering. That would all but ensure that the maps drawn in 2021, after the next census, will be even more extreme than those drawn after 2010.

It would be the ultimately irony if a Republican-backed case against gerrymandering gives Democrats the ability to challenge Republican-drawn maps in 2021.

It’s possible the court will look more kindly on the challenge from Maryland, where Republican plaintiffs are challenging a pro-Democratic gerrymander. In 2010, Democrats moved 66,000 Republicans out of the state’s 6th Congressional District and added 24,000 new Democrats from the Washington suburbs, transforming it from a rural, Republican district to a more suburban, solidly Democratic one. In 2010, incumbent Republican Rep. Roscoe Bartlett won reelection by 28 points; two years later, he lost the new district by 21 points, one of the largest partisan swings in the country.

The Republican plaintiffs allege that Democrats in Maryland’s legislature violated their First Amendment rights by targeting them based on their political views. Two years ago, Kennedy expressed an openness to pursuing such a claim. “Suppose the Court…decided that this is a First Amendment issue?” Kennedy asked Wisconsin’s solicitor general in 2017, implying that extreme partisan gerrymandering could violate the right to free speech by preventing those in the minority from having an equal say in the political process.

Kennedy ultimately declined to sign onto this position, but in a concurring opinion, Justice Elena Kagan urged future plaintiffs to pursue it. “Among those injuries, partisan gerrymanders may infringe the First Amendment rights of association held by parties, other political organizations, and their members,” Kagan wrote.

Many Democrats are actually hoping their party loses the Maryland case. The 6th District will be redrawn either way, after a lower court struck it down and the state’s Republican governor, Larry Hogan, formed a bipartisan commission to draw a new map, which will turn the district back into a Republican-leaning one. So a Supreme Court ruling against the Democrats is unlikely to change the state’s partisan balance—but it could set a precedent that would benefit Democrats in the future.