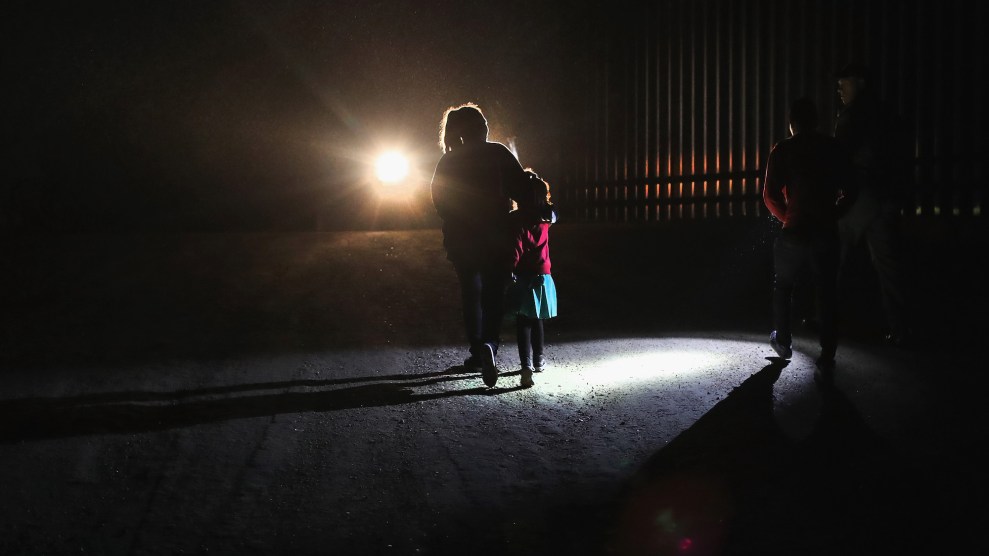 A Honduran mother walks with her children next to the US-Mexico border fence as they turn themselves in to Border Patrol agents in Texas last month.John Moore/Getty

A record number of families fleeing poverty and violence are crossing the US-Mexico border, according to data released Tuesday, despite a slew of Trump administration policies aimed at deterring migrants.

Border Patrol agents took more than 66,000 migrants, including 36,174 family members and 6,825 children traveling alone, into custody in February, making it the agency’s busiest month since 2009. Border Patrol has encountered more than 163,000 family members and unaccompanied children in the past five months, compared to the previous record of 157,000 during the entire 2018 fiscal year.

The Trump administration has used a wide range of policies to prevent families from seeking asylum but has had little success. In June, President Donald Trump abandoned his policy of separating families by prosecuting parents for crossing the border without authorization. Now, the administration is working to expand a policy under which asylum-seekers are forced to wait in Mexico while they await their US immigration court dates. The American Civil Liberties Union is currently suing to stop the policy. If the policy does expand to cover much or all of the border, as the administration intends, that could cause tens of thousands of families to be stuck waiting on the Mexican side of the border, where extortion and violence are widespread.

In the meantime, US Customs and Border Protection is continuing its practice of capping the number of people who can request asylum at official border crossings each day, forcing asylum-seekers to wait in Mexico for weeks or longer to request protection. Administration officials have repeatedly told asylum-seekers to come to these ports of entry, but the new system gives them an incentive to try to cross the border between these crossings without authorization. Asylum-seekers are eligible for protection regardless of how they enter the United States.

Trump administration officials argue that families are exploiting “loopholes” in US asylum law that allow them to be released into the United States after stating a fear of returning to their home countries. CBP Commissioner Kevin McAleenan said at a press conference Tuesday that legislation allowing for indefinite family detention and easier deportation of people seeking asylum is needed to stop what he called the humanitarian crisis at the border.

Immigrant advocates stress that US law explicitly protects migrants’ right to apply for protection from persecution, and they oppose the administration’s efforts to put families in detention. They argue that instead of turning asylum-seekers away at official border crossings, the government should increase capacity to process people in a timely manner.

In the past, most people apprehended by Border Patrol agents have been single adult men from Mexico trying to enter the country undetected. October was the first time that Border Patrol apprehensions of family members exceeded those of adults traveling alone. Those families are generally seeking out Border Patrol agents and placing themselves voluntarily in US government custody.

After being taken into custody, they are generally detained by CBP for a few days and then released to live in the United States while their immigration cases move forward. Some are sent to family detention centers run by US Immigration and Customs Enforcement, but they can only be legally detained for about 20 days.

CBP officials acknowledge that the agency’s temporary holding facilities were not designed to accommodate such large numbers of families. “The system is well beyond capacity and remains at the breaking point,” McAleenan said. Two children—Jakelin Caal Maquin and Felipe Alonzo-Gomez—died in Border Patrol custody in December, the first children to die in the agency’s custody in more than a decade.

About 70 percent of all people encountered by CBP come from Central America’s “Northern Triangle”: El Salvador, Guatemala, and Honduras. In November, more people from Guatemala than from Mexico were taken into CBP custody—the first time in the agency’s history that Mexico didn’t rank first. McAleenan said Tuesday that Honduras has now surpassed Mexico as well.

Central American families are increasingly entering the United States in large groups at remote parts of the border with limited access to hospitals. In the 2019 fiscal year, which began in October, Border Patrol agents have encountered 70 groups of more than 100 people, compared to only two in the 2017 fiscal year.