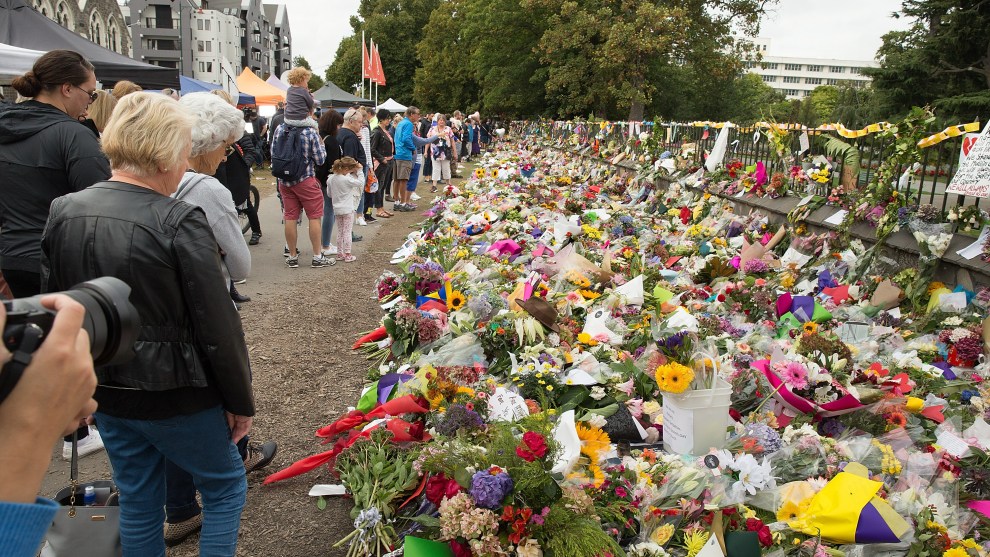 The wall of flowers in Christchurch, New Zealand grows as people pay their respects to those 50 killed in the mass shooting at the two mosques in the city.Martin Hunter/SNPA via ZUMA

Days after the tragic shootings at two mosques in Christchurch, New Zealand, Reddit remains a home for the exact type of white supremacist and Islamaphobic hate that the killer used to rationalize his massacre.

Since the slayings, two prominent subreddits have regularly hosted messages justifying the shooting.

The shooter, well versed in seedy internet culture, sought to weaponize social media platforms, leaving breadcrumbs of his ideology on the crass 8chan message board, across Twitter and Facebook profiles, and in his Facebook livestream of the attack which quickly spread to YouTube. If 8chan was the shooter’s firewood, Facebook the match, and YouTube the oxygen, Reddit is a place where the fire he set is still smoldering.

Since the slayings, members of two of its prominent subreddits with reputations for being hotbeds of bigoted content, r/CringeAnarchy and r/The_Donald, have regularly posted messages justifying the shooting and violence against Muslims and other groups.

“Muslims get what they deserve for being terrorist pedophiles. I have exactly zero sympathy for ANY member of the Religion of Terrorists and Child Rape. Any Muslim who doesn’t like this should get the fuck out of the West. They don’t belong here, they aren’t welcome and no one wants their filthy, greasy terrorist asses here,” read another comment in r/CringeAnarchy.

“You have South Sudanese literally holding entire neighborhoods hostage from what I’ve seen. And you can’t even buy a gun to do fuckall about it,” one user wrote in an r/CringeAnarchy thread, responding to a statement from Australian Sen. Fraser Anning blaming the attack on the immigration of Muslims into New Zealand.

“If Islam would stop its 24/7 decapitation / murder marathon, maybe we wouldn’t have to wake up to stories like this,” read another post in r/The_Donald.

Such posts are just a sampling of the vast amounts of content justifying the murders and bigotry on the two subreddits. Mother Jones reviewed at least a dozen other examples of such hate, and advocates on Reddit’s r/AgainstHateSubreddits discussion board, which has been critical of r/CringeAnarchy and r/The_Donald, catalogued many similar posts. Other examples reviewed by Mother Jones included messages calling Islam a “death cult” and “religious fascism,” posts calling for the religion to be eradicated, and others suggesting that violence against Muslims in western countries is justified.

The posts are extreme, but are a part of a consistent pattern of hate speech posted to both groups.

Reddit users and outside observers have long called for the company to remove the subreddits, arguing that they have repeatedly violated the message board’s rules. The company has taken some action on r/CringeAnarchy by quarantining it—a warning signal for subreddits where some functions are restricted in an attempt to get them to improve before a potentially being deleted. In the case of r/The_Donald, Reddit CEO Steve Huffman has in the past specifically defended its presence on the platform, saying that Trump supporters deserve an online home.

A Reddit spokesperson pointed out over email that the company had strengthened its hate speech and violence policies, leading to more users and subreddits being banned.

“Reddit is always evaluating and evolving its policies, and has made significant changes in the last several years,” the spokesperson said. “We have also significantly built out the teams responsible for detecting and enforcing against policy infractions, proactively going after bad actors on the site, and creating engineering solutions to detect and prevent them in the future.”

Even with these defenses, rampant hate-speech targeting Muslims in the wake of the New Zealand shootings that fall into a broader pattern of hate on r/CringeAnarchy and r/The_Donald, highlight their continued presence on Reddit, even as other hateful subreddits have been removed from the platform. While many of the worst posts are eventually removed by moderators, more come, and the communities that create such content persist.

“They absolutely should have gotten rid of these groups and they should have done it a long time ago,” said Rishab Nithyanand, a professor at the University of Iowa who has researched far-right extremism on Reddit.

According to a machine learning-powered analysis, conducted by Nithyanand and his colleagues, of language used on banned subreddits, r/CringeAnarchy and r/The_Donald regularly host the kind of discussions that have, in the past, prompted Reddit to delete less popular forums.

Reddit declined to comment on the possibility that its hesitation to ban either subreddit is linked to their size, or a potential backlash from a large group of users. The_Donald has around 725,000 subscribers and if removed would be one of the largest, if not the largest, subreddit ever banned. CringeAnarchy’s numbers are less clear since it was quarantined by Reddit, but as of last year, it boasted hundreds of thousands of subscribers. In r/The_Donald’s case, there’s obvious potential for broader political backlash if the company were to ban a community whose namesake is the current president, no matter how justified the decision. Such complaints could be widely echoed in conservative media, even if the subreddit’s user base, including its Extremely Online right-wing trolls, represents just a faction of Trump’s broader support.

To Oren Segal, director of the Anti-Defamation League’s Center on Extremism, when deciding to ban a forum, Reddit should focus on if it serves as a platform to hate, and put political fears or concerns about its bottom line aside.

Segal points out that hate on Reddit doesn’t exist in a vacuum, but forms part of a network of internet racism. “It’s clear that extremists are aware of the broader ecosystem online and they’re aware that every platform is connected to each other,” Segal explained. “They’ve made sure they have a presence on each of the platforms so that they can go to others if there is a takedown.”

It’s not uncommon for members of far-right and extremist internet communities to share links to Discord chat rooms and Reddit groups in the comments of YouTube videos, or vice versa. Chat logs of white supremacist and neo-Nazi communities on Discord, recently published by the left-wing media organization Unicorn Riot, show clear connections to r/The_Donald, with mentions of the subreddit occuring 459 times in the messages. People taking part in the chats often criticize the subreddit for its members’ comparatively tepid views, but the messages show white supremacists discussing recruiting in and posting content to the subreddit, as well as making reference to it as a step on their own movement towards far-right radicalization.

“At the end of the day, these companies are aware that people are radicalized on the platform. The action they do or don’t take, says something about what that company values,” said the Anti-Defamation League’s Segal.

“People, including the ADL, are hungry not just for terms of service changes, but responses from companies that are clear to meet the issues of this moment,” he said. “It might be drastic to remove The_Donald, but it might be a necessary step to meet something as drastic as people celebrating violence in New Zealand.”

Listen to Mother Jones journalists Ali Breland, Mark Follman, and Pema Levy describe how giant tech companies have proven themselves unable or unwilling to stop the spread of hate speech on their platforms, and became unwitting allies of the Christchurch shooter, on this week’s episode of the Mother Jones Podcast: