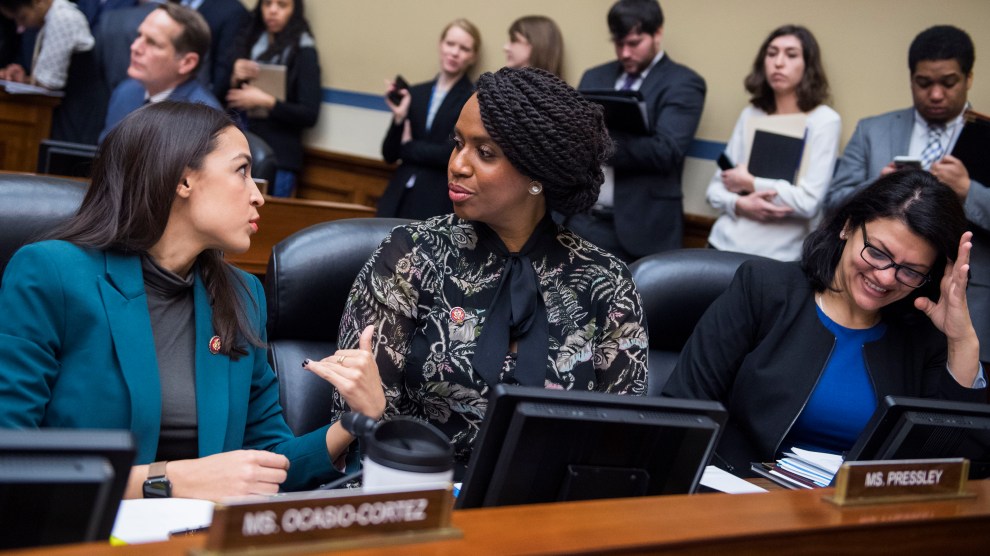 When news broke in January that a slew of Democratic House freshmen who have largely forsworn corporate PAC donations had snagged seats on the powerful House Financial Services Committee, Wall Street was not pleased.

A Thursday hearing hosted by the committee highlighted why financial industry executives may have been so concerned, as several of those Democrats lobbed sharp questions at Kathy Kraninger, the Trump-appointed director of the Consumer Financial Protection Bureau. Lawmakers focused on what they said was her lack of qualifications to lead the financial watchdog, as well as the industry-friendly legacy of her predecessor at the bureau—Mick Mulvaney, a longtime foe of the CFPB who led the bureau from November 2017 until becoming acting White House chief of staff in December. The committee’s members sought information on plans to uphold Mulvaney’s actions, which included relaxing Obama-era regulations aimed at cracking down on predatory payday lenders, stripping enforcement powers from the office responsible for protecting minority borrowers from discrimination, and halting collections of certain data about student loan debt.

One of the most memorable—and toughest—questions came from first-year Rep. Katie Porter (D-Calif.), a longtime consumer law professor and attorney. Porter opened her line of questioning by asking Kraninger to define the difference between an interest rate and APR. After Kraninger responded, and Porter found her answer lacking, the congresswoman lifted a textbook to read a definition aloud, noting that “I’ll be happy to send you a copy of the textbook that I wrote.” Then she gave Kraninger a math problem involving a hypothetical two-week emergency car repair loan taken by a single mom, even offering Kraninger a calculator. You can watch both moments below:

.@RepKatiePorter quizzed @CFPB Director Kraninger on what an APR is.

🧮The DIRECTOR OF THE BUREAU MEANT TO #PROTECTCONSUMERS cannot even BALLPARK the APR of a short-term payday loan. So *how* does @CFPB Dir. Kraninger expect consumers to? #ProtectConsumers #StopTheDebtTrap pic.twitter.com/jOGarXstaa

Rep. Alexandria Ocasio-Cortez (D-N.Y.) described student debt in America as a “crisis,” citing the projected rise in borrowers unable to pay off their loans and the sky-high rate of delinquencies, before contrasting rising values of student loans to stagnant or falling wages. She asked Kraninger for updates on a delayed CFPB report on the student loan market that is required by federal law. Kraninger said the report delay was because the agency has not filled its student loan ombudsman position. (Kraninger later noted that the job was only posted Tuesday, less than 24 hours ahead of Thursday’s hearing.)

Rep. Ayanna Pressley (D-Mass.) also pressed Kraninger on student debt, asking whether the bureau will prioritize policing discrimination in the student loan servicing market. She referred back to a 2017 decision made by Trump’s Education Department, led by Betsy DeVos, to terminate a data-sharing agreement with the CFPB, which limited oversight of student loan servicers.

"I'm concerned the Bureau is unwilling to take on Betsy Devos & the student loan industry to obtain the records & data needed to effectively police this potential discrimination…in the student loan market" #ProtectConsumers pic.twitter.com/ShkhKGdriI

Rep. Rashida Tlaib (D-Mich.) posed a simple question, asking Kraninger whether she believes the organization she leads should exist at all. Kraninger did not directly answer yes. The question flicks back to Kraninger’s predecessor, Mulvaney, who as a congressman co-sponsored legislation to eradicate the bureau, as well as several other proposals aimed at weakening the watchdog’s power. A number of congressional Republicans share the view that the CFPB should not exist. (Rep. Alex Mooney, a West Virginia Republican, said as much during Wednesday’s hearing.)