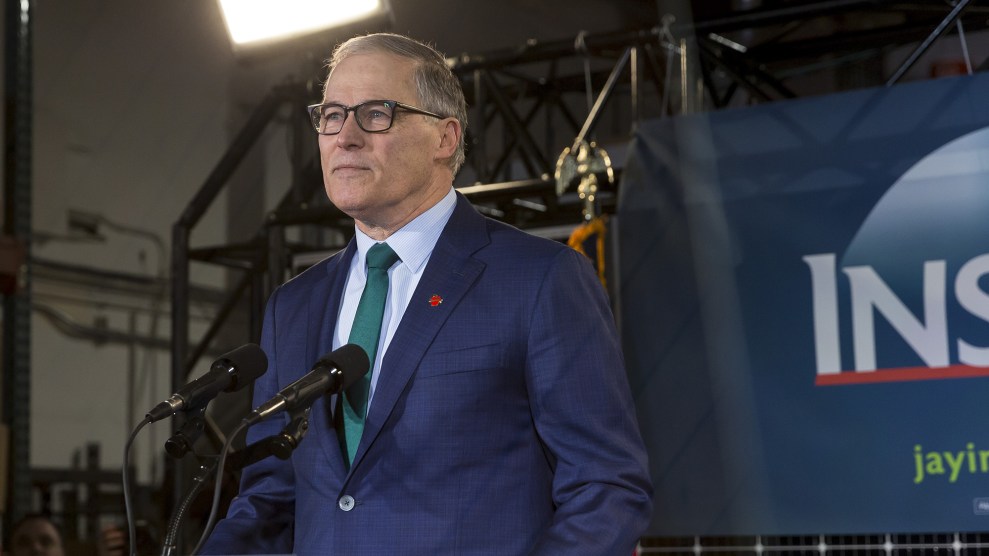 Washington Gov. Jay Inslee, a Democratic presidential candidate focused on climate change, argued Sunday that the Senate will have to abolish the filibuster in order to tackle the issue. “We’re not going to get anywhere as long as Mitch McConnell has the keys to the car,” he said during an interview at South by Southwest in Austin, Texas.

Whereas other Democratic candidates are not running for the White House as single-issue candidates, Inslee’s campaign prioritizes the existential threat of global warming. The “first and paramount duty of the next president has to be to tackle climate change,” he said on Sunday. He warned that progress won’t be made unless the Senate removes the 60-vote threshold for passing legislation known as the filibuster, a long-standing procedural hurdle that requires 60 senators to agree to move legislation to a vote. Inslee, who noted he is the only 2020 candidate who supports ending the filibuster, called on other Democratic presidential contenders to join him.

That may be a tough sell among the other contenders, however, many of whom now serve in the Senate. The filibuster did force Democrats to weaken the Affordable Care Act before its ultimate passage in 2010, and it will likely stand in the way of other major legislation that Democrats may try to enact in the future, such as Medicare-for-All. But many Democratic senators are hesitant, because eliminating the filibuster is, of course, a double-edged sword: Whichever party is in power would more easily be able to pass laws without any say in the matter from the minority party.

Sen. Cory Booker (D-NJ), another presidential contender, says he will “personally resist” efforts to end the filibuster. Sen. Amy Klobuchar (D-Minn.), another 2020 candidate, says she regrets a partial repeal of the rule in 2013. Even Sen. Bernie Sanders (I-VT), who calls for radical change, said he is “not crazy” about the idea.

But recent years demonstrate that the filibuster is already eroding. In 2013, when the Republican minority in the Senate was blocking confirmation of President Barack Obama’s judicial appointments, Majority Leader Harry Reid led Democrats in eliminating the filibuster for lower court nominees as well as cabinet appointees. Then, in 2017, Republicans eliminated the filibuster for Supreme Court nominees in order to confirm Justice Neil Gorsuch. The 60-vote rule, which now only applies to legislation, may well be on its way out. It’s just unclear which party will be the one to end it—and benefit first.