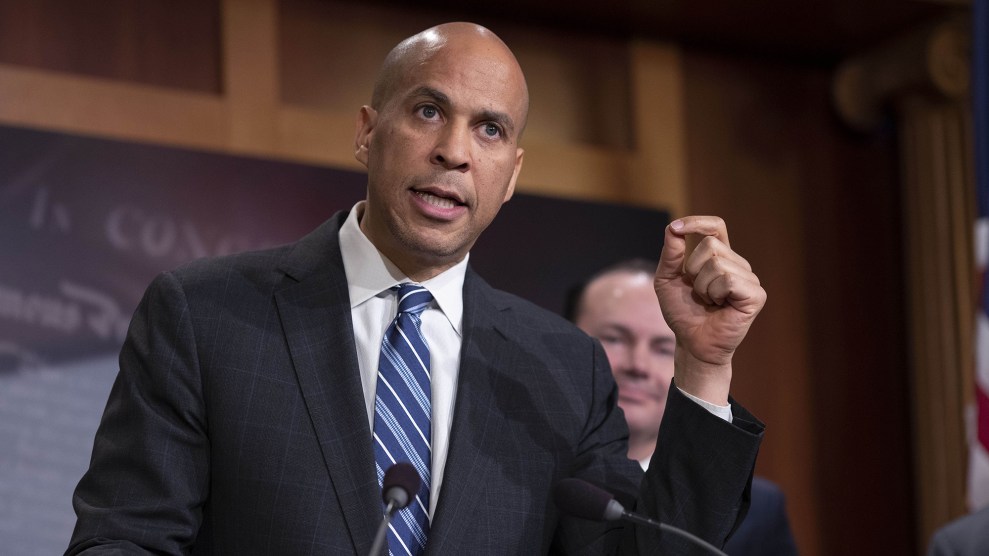 Sen. Cory Booker at a news conference celebrating the passage of a criminal justice reform bill on December 19Alex Edelman/CNP/ZUMA

Sen. Cory Booker (D-N.J.) released a sweeping package of criminal justice proposals Thursday, calling for sentence reductions, marijuana legalization, and more employment opportunities and voting rights for ex-offenders. The bill, which he calls the Next Step Act, pushes his colleagues in Washington to do more to address injustices in the criminal justice system. But it also helps make the case for his own presidential candidacy.

I supported the First Step Act – a historic criminal justice bill recently signed into law – but that's just the beginning.

As the Democratic primary field grows crowded—12 candidates are already running, two have exploratory committees, and others, like former Vice President Joe Biden, are poised to run—the candidates are struggling to distinguish themselves and win over a plurality of primary voters. A criminal justice reform agenda could be Booker’s ticket to top-tier status, particularly if it helps him win over the black voters who comprise such a key share of the Democratic electorate.

Kamala Harris, a leading contender and the other black candidate in the race, is a former prosecutor with a largely liberal record that nonetheless includes tough-on-crime stances that critics see as regressive and unfair to people of color. Sen. Amy Klobuchar (D-Minn.) is also a former prosecutor. Sens. Elizabeth Warren (D-Mass.) and Bernie Sanders (I-Vt.) are staunch progressives, but both approach the issue of inequality largely through critiques of the economic system and abuses by the financial sector and big companies. To many Democrats, criminal justice reform offers a missing answer to the question of why society is so unjust, one that focuses more on systemic racism.

Justice reform has become a major issue for Democrats, but its emphasis on fairness, redemption, and scaling back government overreach also appeals to a subset of Republicans. In December, Congress overwhelmingly passed a sentencing reform bill with support from a majority of Republicans. Some influential conservatives, like the Koch brothers, want to see more reform.

But criminal justice reform is a particular issue of concern to people of color. Since the Democratic primary winner will need significant support from the African American voters who make up much of the Democratic Party in the South, Booker may have found a way to stand out to the Democratic base on the campaign trail while appealing to a bipartisan coalition nationally.

Booker’s legislation, which he introduced with Rep. Bonnie Watson Coleman (D-N.J.), contains a long list of reforms favored by criminal justice advocates to end racial disparities that result from mass incarceration of people of color. Among other things, the bill seeks to eliminate the sentencing disparity between crack cocaine (seen as a drug used in the black community) and powder cocaine (used in wealthier white communities) and end the disenfranchisement of former felons, a problem that disproportionately affects African Americans. The bill also includes provisions to address racial profiling and police brutality.

When introducing the legislation, Booker spoke of the bipartisan efforts to reform criminal justice and his hope that his bill would garner widespread support. Last week, he reintroduced legislation to legalize marijuana and rebuild communities devastated by the war on drugs—a bill that Harris, Warren, Sanders, and other 2020 hopefuls co-sponsored.

All of the Democratic presidential contenders have embraced criminal justice reform. But none have made it the central focus of a candidacy. With this bill, Booker could be taking the first step toward doing exactly that.