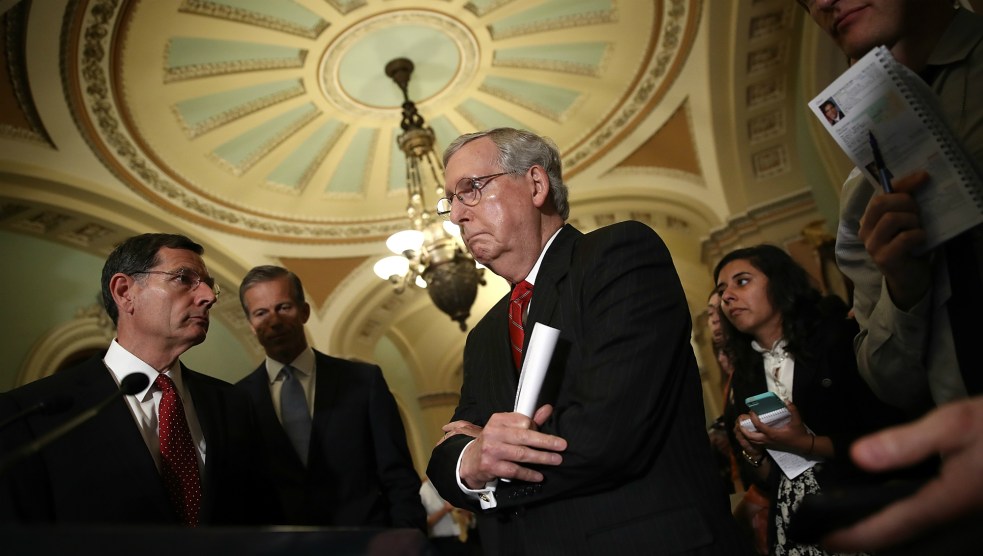 Senate Majority Leader Mitch McConnell (R-Ky.), like many other Republicans in Congress, has been aggressively bashing HR 1, the sweeping anti-corruption bill that Democrats passed in the House last week. McConnell has called the bill a “radical, half-baked socialist proposal” and a “political power grab” by Democrats, and has made it clear he won’t bring the measure up for a vote in the Senate.

But when it comes to campaign finance, both parties have their hands dirtied by dark money, and it’s not a given that closing loopholes on disclosure of campaign spending would prove more beneficial to Democrats. Although conservative groups have spent significantly more dark money (political spending that doesn’t reveal where the funds originated) than liberal groups over the past decade, liberal groups have not been shy about exploiting the current campaign finance system for their own benefit. Conservative groups have spent approximately $763.2 million in dark money over the past decade, while liberal groups spent approximately $235.8 million during the same time frame.

“The Democrats have often times been more creative in dodging disclosure than Republicans.”

But recently, dark money has favored Democrats. In the 2018 midterms, almost double the amount of undisclosed funds was spent to boost liberal candidates than conservatives. This also reflected the fact that the Democratic candidates in the House and Senate greatly out-raised their Republican counterparts.

One liberal dark money group, Majority Forward, accounted for about $1 of every $3 in dark money spent during the 2018 election cycle, according to an analysis by Issue One, a nonpartisan campaign finance advocacy group. Majority Forward is a 501(c)(4) “social welfare” nonprofit founded in 2015 as an affiliate of the Democratic super-PAC Senate Majority PAC.

Another example of Democratic dark money is a liberal super-PAC called Highway 31—which spent $5.1 million to help Democrat Doug Jones defeat controversial Republican Roy Moore in the 2017 US Senate special election in Alabama. Most dark money groups are nonprofit organizations instead of super-PACs, which are required to disclose their donors. However, if a super-PAC gets most of its money from a dark money nonprofit, it is essentially hiding its original donors from the public. In December 2017, the Center for Public Integrity reported on how Democrats used a unique and mostly unknown legal loophole to avoid disclosing the identity of donors of Highway 31. The super-PAC did all its business on credit, which allowed Highway 31 not to reveal its donors until several weeks after Alabamans had already voted.

“The Democrats have often times been more creative in dodging disclosure than Republicans,” says Brendan Fischer from the Campaign Legal Center, a nonpartisan watchdog in Washington, DC. “Groups like Majority Forward, Highway 31, and others would be unlikely to push the legal envelope in this way if HR 1 were to help create a functioning FEC and laws that would prevent these disclosure dodges.”

In regards to campaign finance, HR 1 would require dark money groups to disclose donors, force social media companies to reveal the source of money for political ads, restructure the Federal Election Commission to have five commissioners instead of six (although there are currently only four commissioners, with two empty positions) to break political gridlock, and publicly finance campaigns by having the government match small-dollar donors.

Some of the largest dark money groups that have attempted to influence national politics since Citizens United include liberal groups like the League of Conservation Voters, Planned Parenthood Action Fund, VoteVets Action Fund, and Patriot Majority USA. “The Democrats, like the Republicans, have become increasingly comfortable with using dark money and super-PACs,” says Daniel Weiner from the Brennan Center for Justice at New York University. “Liberal groups like labor unions would be more restricted in terms of how they engage in politics. That could ‘hurt’ liberal groups in some ways, although in a larger sense liberal constituents would be better off. HR 1 supporters know very well that it’s not going to be to their benefit in many instances, but it’s the right thing to do in the long run.”

“Unfortunately, Democrats and Republicans alike have long been beholden to big money in politics, blocking meaningful reform and benefitting from weak enforcement by the FEC.”

Some well-known liberal political groups have even ended up on the wrong side of campaign law. The FEC fined Suffolk Construction Co., a federal government contractor, for making illegal contributions to a super-PAC supporting Hillary Clinton in 2016. MoveOn.org, a liberal activist group, was also fined a small amount by the FEC for failing to move earmarked contributions to the right campaigns within the permissible time period during the 2016 election.

“What is good for the goose is good for the gander—many liberal organizations have had difficulty complying with muddied election law standards in the past. They will suffer in the future just the same,” says Ben Barr, a conservative campaign finance lawyer and former counsel to two chairmen of the FEC.

Although HR 1 does not limit the amount of money that anyone can spend on elections, it does make it harder to spend that money anonymously, and it creates an incentive for more small-dollar donors in an attempt to even the playing field against wealthier donors. The federal government would do this by matching each dollar a candidate raises from small donations with $6 of public money for all candidates for president and Congress, capped at $200 as the maximum small donation that could be matched.

Some Democratic presidential candidates, including Sen. Elizabeth Warren (D-Mass.) and Sen. Kristen Gillibrand (D-N.Y.), have in the past spoken out against the use of dark money in politics. Although most of the 2020 Democratic candidates have expressed their desire not to have any super-PACs supporting their campaigns, there is not quite a consensus among Democratic candidates on how to deal with dark money, as there is regarding corporate PACs.

“Unfortunately, Democrats and Republicans alike have long been beholden to big money in politics, blocking meaningful reform and benefitting from weak enforcement by the FEC,” says Paul S. Ryan from Common Cause, a nonprofit government watchdog group. But he also highlighted that McConnell’s attempts to paint HR 1 as a Democratic power grab is stretching the truth. “Sen. McConnell’s not fooling anyone with his self-serving rhetoric. America knows he’s only protecting his fat-cat friends.”